Dolmen squanders too many opportunities to be a unique experience and winds up as a merely passable recreation of a tried-and-tested formula.

The Soulslike genre is about as saturated as it can get. What was once a niche series of games, became a specialized subgenre, then became an extremely popular series of mechanics that have been iterated upon countless times by countless games now. Given this, you’d think any Soulslikes that releases after 2020 or so would put in the effort to do something a little different to avoid immediately fading into the background. Or at least deliver an experience that feels worthy of its inspiration with a solid execution. The good news for Soulslike fans is that many of these games have, in fact, brought enough of their own flavor to the table to more the justify their existence, but that doesn’t mean the genre is immune cheap knock offs that are more interested in standing on the shoulders of the games before them than actually doing anything interesting of their own. Unfortunately for Dolmen, it has more in common with the latter than the former.

If the heavily tread ground of Dolmen’s resource hunter/fight for survival story structure doesn’t tip you off to the uninspired game you’re in for, then the gameplay surely will. From top to button, this is a by-the-numbers Soulslike game that rewards cautious exploration and enemy attack memorization. It has ruthless enemies that make for punishing combat, different classes with various status point allocations to set them apart from each other, and of course beacons that serve as spawn points to which you return every time you’re inevitably slain.

"If the heavily tread ground of Dolmen’s resource hunter/fight for survival story structure doesn’t tip you off to the uninspired game you’re in for, then the gameplay surely will."

Upon returning, you’ll also be gathering everything you lost at the place you died if you can and trying harder next time. Choosing between a one-handed weapon and a shield or two-handed weapons, which element to focus your weapon crafting for, and which perks you assign to any given weapon or piece of armor are the keys to truly excelling at the game, and each choice has impacts on the combat that will immediately be felt. Even if the gun that shoots acidic bullets only does ten more damage than the gun that shoots ice bullets, that could make or break your situation, so observing how powerful or ineffective any given weapon is against any given enemy is paramount – along with constant energy management.

All of this is fine when it’s at its best, which isn’t a terrible thing. Fine is fine, despite lacking any sort of real special sauce. It does however lack polish – which is not fine. When I’m still shooting from the gun despite letting go of the gun button so I can attack with a melee weapon several entire seconds later – we have a problem. Just as we do when my well-timed giant sword slash goes right through an enemy without registering a hit. I also ran into several instances of controller buttons, like sprinting or the lock-on function just not working at all. Forcing me to play with a keyboard and mouse despite the game clearly indicating that the controller was supported and detected.

These would be forgettable bugs if the combat had something to it to make it worth trudging through its problems, but unfortunately that’s just not the case. Managing your energy with batteries and converting that into either energy attacks or health is a fun tug or war to balance out as you carve and blast your way through Revion Prime, though, and the game does a good job incentivizing you to keep an eye on that on top of just staying alive. So, hey, say what you will about how derivative it all is (and I will), but at the end of the day, Dolmen does achieve what it wants to on a fundamental level. 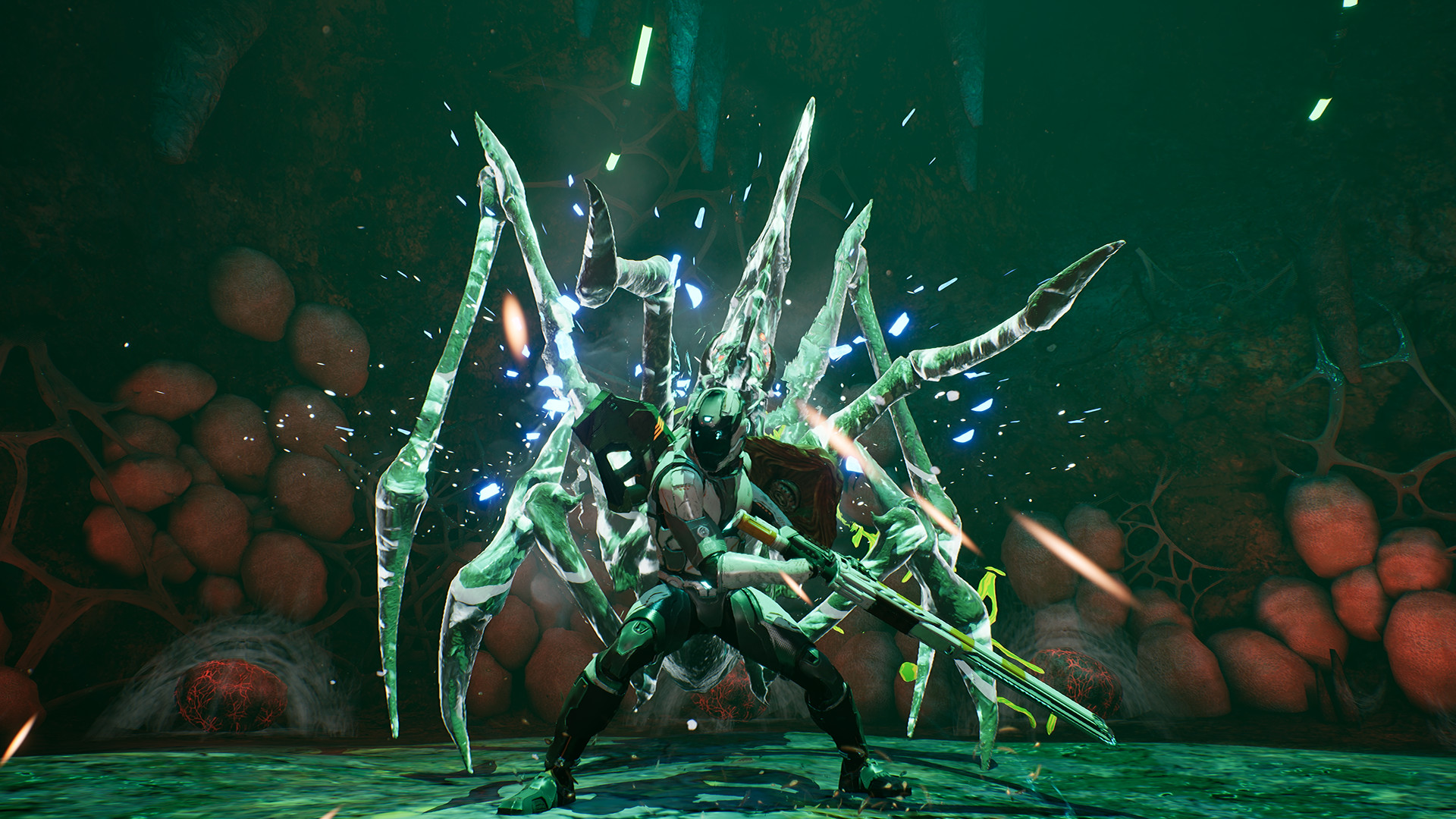 "Say what you will about how derivative it all is, but at the end of the day, Dolmen does achieve what it wants to on a fundamental level."

The weapon choices have tradeoffs with speed, power, and technique. Different enemies often require different approaches, and no matter how good you are, any fight can be the one that kills you next. There are even multiplayer elements included although I couldn’t find anybody during my playthrough for whatever reason. So, for what it’s worth, Dolmen does a good job of replicating this format in its own far-flung dystopian future setting. If it could only top it off with more consistent combat with more predictable hit detection and just a dash or two more originality thrown in, it could have been more than what it ultimately is, which is a bit of a wash.

The story side-steps a lot of the vagueness of Soulslike games, and actually benefits from that more than not. The interdimensional properties of the Dolmen element is a mildly intriguing centerpiece of the story, and while the content of that story is mostly forgettable sci-fi fodder, the setting itself is at least something I can understand as a justification for what is going on right from the get go, which is something a lot of Soulslikes don’t have, and is perhaps the best thing this game stumbles into in terms of putting meaningful twists on the format. It’s a very straightforward and reasonably well-realized world that is fun to uncover more often than not.

Representing the ideas of the game’s setting is a pretty nice-looking series of areas that change around just enough to keep the game from getting too drab. Even when the environments are at their blandest, you can still tell some TLC went into their designs. When you’re just admiring the environments, you might even forget you’re playing a budget title for a moment. While your weapons, attack animations and most of the enemies often tip over into the generic side of the spectrum, the areas themselves do have a lot of flavors despite perhaps feeling a tad incoherent when considered as all part of the same world. 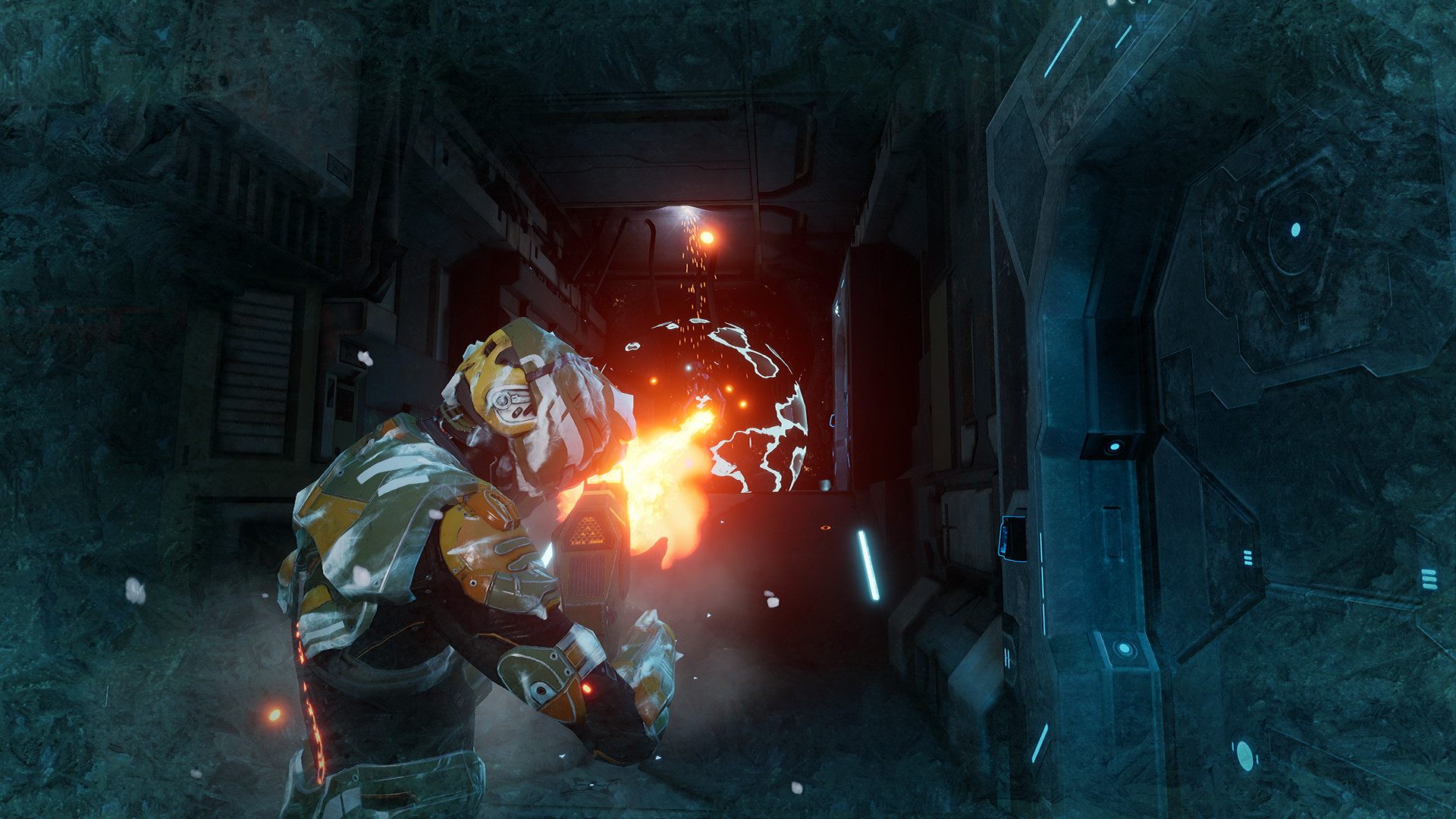 "Dolmen does a respectable job of recreating most of the core elements that have carried the Soulslike genre to – and kept it in – its current prominence, and if you’re a hardcore Soulslike fan then perhaps that’s enough for you, but given its lack of polish, and just a general disinterest in meaningfully iterating on hardly any of its many borrowed ideas, it’s a bit of a tough sell to anyone outside of the most dedicated Soulslike players."

Dolmen does a respectable job of recreating most of the core elements that have carried the Soulslike genre to – and kept it in – its current prominence, and if you’re a hardcore Soulslike fan then perhaps that’s enough for you, but given its lack of polish, and just a general disinterest in meaningfully iterating on hardly any of its many borrowed ideas, it’s a bit of a tough sell to anyone outside of the most dedicated Soulslike players. Not having enough of your own ideas and failing to execute some of the borrowed ones isn’t a good mix. That said, what is here is a mostly functional recreation of the core Soulslike elements through a dark sci-fi lens that you don’t see every day. Plus, the genuinely cool looking environments and more straightforward story could certainly result in a good time for fans of sci-fi and Soulslikes that don’t mind a moderate amount of jank and dullness here and there.

Final Verdict:
FAIR
Dolmen relies too much on the Soulslike playbook to be much of anything other than a middling iteration of the formula.
A copy of this game was purchased by author for review purposes. Click here to know more about our Reviews Policy.