Like it or not, the game industry is changing. Rapidly. The advent of the internet and the eventual domination of services like Xbox LIVE and the Playstation Network means that most developers take at least a nominal access to the internet as a given, and structure their businesses accordingly. Where, even as short as five years ago, the norm used to be a main game and two or three full-size expansions, now it seems like most games have at least one expansion worth the name and a bunch of little ones that add up to the size of another.

I say most rather reservedly. Expansions themselves seem to be getting confused for full games now, with entries like Halo 3: ODST and Assassin’s Creed: Brotherhood blurring the lines – at least, cost-wise – between full-length game and expansion.

It was largely the advent and popularity of digital distribution services that led to this change. Why spend resources on making a worthwhile expansion when a developer could make an extremely cheap (that is not to say lacking in quality) short tag-on adventure and price it in such a way that they reap more money than a big, unwieldy, time-and-cost consuming expansion? Not even that is something to worry about, since most developers are canny enough to make the expansions worth the four or five dollars they charge for them.

But there are some of them – even released by otherwise quality developers – that are aggravatingly indicative of how stupid developers seem to think gamers are. Most aggravating of all is the release-day DLC.

Take Fable III, a critical and popular success that also happened to be fun as hell. On release day, the game released with a fairly large collection of stuff, but available through the store were a few other bits and bobs. Some content was given away for free, some of it was available only at cost. Like black dye. Nobody has yet been able to convince me that programming black – or pink – dye into a game that is so jam-packed with relatively unnecessary content necessitates charging players for it. They charged us for it entirely because they knew that players would pay for it, even in a state of moral outrage. 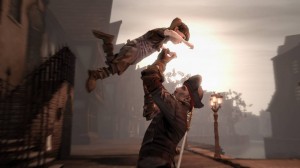 Factor in the cost of the black dye, the pink dye, the Industrial Knight outfit, and a few weapons packs it adds up to about 10 dollars or so. So a $60 game, not a collector’s edition or anything like that, ends up costing around $70. Then, when the additional quest content is released, it’s another single payment of $5-10. Which brings the cost up to $80. This is without regard for any meaningful lore-changing or story-affecting content, and without the cost of pre-order. Eighty bucks. For a single game.

It’s subtle nickel-and-dime stuff that I find questionable. It’s not the quality of the content that bothers me, it’s how piecemeal it comes in release. Was forcing players to pay for the dye pack, of all things, necessary? It can’t cost any more to produce, and the instant download meant that the entire thing was already coded into the game, and buying the dye just unlocked it within the game. The same was unfortunately true of the first expansion DLC release: the quest under Bowerstone. It, too, was an instant download, which again meant that it was already included in the game, so the content didn’t need an extra two weeks of tweaking or coding to get it released, it was just waiting for gamers to play the game long enough to forget that they had paid $60, and were willing to shell out another few bucks.

When Dragon Age: Origins released, if you paid an extra $15, you could purchase the Collector’s Edition, which on top of having a few physical treats (a very pretty map of Ferelden as one of them), or the Digital Deluxe Edition, which didn’t come with the map but came, instead, a short quest, called “Warden’s Keep.”  The quest was something totally superfluous but (I’m told), fun. Fine, I don’t mind missing out on a two or three hour quest in a game that generally clocks in at around 40 or so hours to begin with. But the biggest annoyance was that the quest is constantly shoved in your face. A waving merchant stalked you in your camp every night, and I imagine the warden, as well as the rest of the party, was kept up at night by the guy’s gigantic glowing exclamation point that never went away. MISSING CONTENT HERE. BUY IT FOR FIFTEEN DOLLARS. 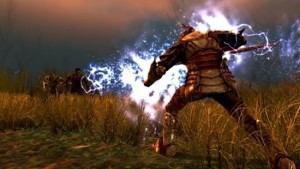 It begs the question as to what we are entitled to when we spend $60 dollars. Are games to be strictly delineated by genre? Will a first-person shooter longer than 9 hours list those hours as additional content? Should games release single-player and multi-player portions separately? How about an RPG just gives the player a basic set of armor and weapons and forces them to pay a dollar here, a dollar there, to unlock even the option of using the rest?

That is not to say that any of the above games are bad (quite the contrary), and it might all sound ridiculous or look like absurdist bitching, but these are legitimate concerns. The more comfortable gamers get at buying things that by all rights should be covered with the original purchase cost, the more developers are going to exploit it. The more shit is going to be held back from us with our games, the more we’ll have to pay for separately, as we inch toward games that only release half their content at a time.

I don’t want to wait five years and find out we’ve all been sucker punched.