Nintendo has had some uncharacteristic success with digital content- games like Pushmo, Sakura Samurai, and Dillon’s Rolling Western were all titles released exclusively for their eShop, and all of them were great games, with an extraordinary value proposition. For the Wii U, Nintendo offered players New Super Luigi U, a downloadable expansion pack for New Super Mario Bros. U, which was so substantial that it pretty much was its own game, except priced at a third of what a new game is priced at.

Unfortunately for them, their newest digital offering for the Wii U is Dr. Luigi, the newest game in the long running Dr. Mario franchise, that skins it with the lesser known Mario brother to celebrate the ongoing ‘Year of Luigi.’ Dr. Luigi is, like all Dr. Mario games, a good title, which can provide for a lot of addictive fun- indeed, judged on its own merits, it’s actually a fairly great offering that I would advise everyone to pick up. Unfortunately, Dr. Luigi is also shockingly priced, netting you $15, which is just $5 less than New Super Luigi U, which was essentially a full price game.

Ultimately, Dr. Luigi struggles to justify its price, and this is the largest knock against it- it’s a good game, that at a cheaper price would be recommended to everybody, but at its current asking price, should be avoided at all costs. 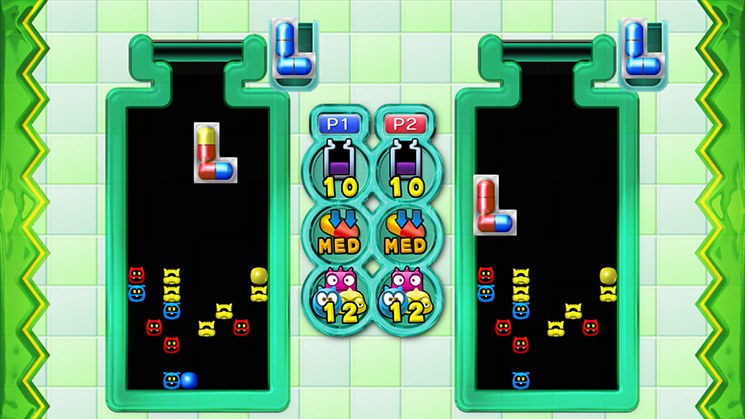 "Both Virus Buster and Flash modes make a return from Dr. Mario Online RX (the Wii entry), as does the aforementioned Online mode, and both largely feel as familiar as you would expect them to- nothing has actually changed between their previous appearance and this one."

Of course, the game has other issues as well, and these are only compounded when the price is considered in the equation- whereas Dr. Luigi is a surprisingly full featured game, offering multiple game modes, and even an unfettered online mode (once again, uncharacteristic for Nintendo), a whole lot of it will be largely familiar to any player who has played recent Dr. Mario games. Both Virus Buster and Flash modes make a return from Dr. Mario Online RX (the Wii entry), as does the aforementioned Online mode, and both largely feel as familiar as you would expect them to- nothing has actually changed between their previous appearance and this one.

That is actually a failing that pervades all of Dr. Luigi- I recognize that the game is by its very structure and nature restricted as to how much it can evolve and grow (for those who somehow do not know, Dr. Mario was Nintendo’s take on the Tetris formula, and it involves you lining up pills to eliminate viruses from the playing field), but there are still things it could do to expand the scope of the game and seem like more than an apparently cynical repackaging of Dr. Mario Online RX but with just a Luigi skin. We have the same mechanics, we have the same game modes, the game even seems to look and sound largely the same. General disdain at this perceived recycling of the product aside, the other bigger issue is that the game and its mechanics feel dated too, especially in light of some better puzzle games that have thrived on XBL and PSN in recent years.

One thing that has changed is limited to the new Operation L mode- in this mode, the only pills you get are, as the name suggests, L shaped (two pills conjoined to create a compound L). This creates an interesting new dynamic, as lining up pills always means you need to consider one arm of the L, making perfect placement almost impossible unless you give it some very careful thought. It can get frustrating at times, but it adds a wrinkle to the game’s mechanics and puts some challenge into the game again, breathing new life into a formula that is at this point very creaky and old. 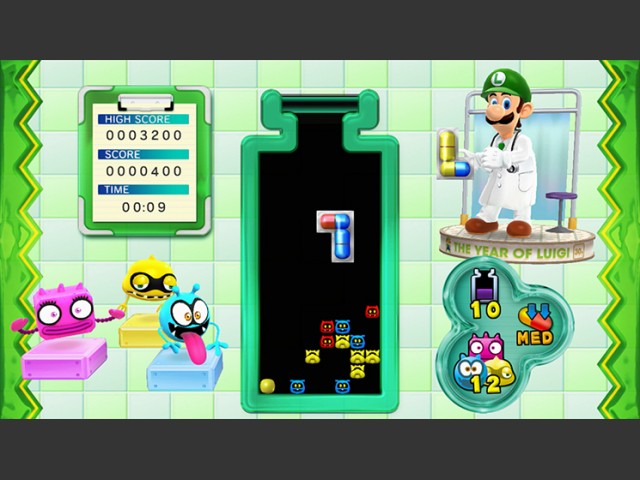 "As it stands, it simply cannot be recommended at its current price at all. Maybe Nintendo set a bad precedent when an offering as meaty and substantial as New Super Luigi U was offered for $20, but when a game like Dr. Luigi costs nearly as much, you know somewhere down the line, their pricing curve went horribly wrong."

The great thing is that all of these modes, including, yes, Operation L, are however supported for versus and online play. So if the rather dated Virus Blaster or Flash modes don’t appeal to you for online play, you can always just try a match (ranked or unranked) in Operation L. Online play is lag free, and while there are some UI annoyances (you have to exit and make a room from the beginning if, for example, you chose the wrong game type while creating a room), it’s still a good offering from a company that is otherwise known to be almost shockingly online averse.

The core game product here is good- it has its issues, but it is a fun, good game, that would be recommended to Wii U owners were it not priced so obscenely. As it stands, it simply cannot be recommended at its current price at all. Maybe Nintendo set a bad precedent when an offering as meaty and substantial as New Super Luigi U was offered for $20, but when a game like Dr. Luigi costs nearly as much, you know somewhere down the line, their pricing curve went horribly wrong.

It’s a good game, I guess, and if there is ever an eShop sale, maybe you can look at it, but for now, stay away. If you have $15 to blow, go throw in another $5 and get the excellent New Super Luigi U instead.

This game was reviewed on Nintendo Wii U.

The core Dr. Mario formula is here, and it's exactly as it was; Operation L is great fun; the online offerings are surprisingly great

The core Dr. Mario formula is here, exactly as it was, and it often feels dated; the game looks and sounds a lot like the Wii game that came before it, which makes it feel even more recycled and dated; at $15, it is ridiculously bad value

Final Verdict:
FAIR
At a lower price, it would have been a good game worthy of recommendation, but at this price, stay away- there's better things on the Wii U eShop that deserve your attention anyway.
A copy of this game was provided by Developer/Publisher/Distributor/PR Agency for review purposes. Click here to know more about our Reviews Policy.