Dr Who: The Eternity Clock Review

With the likes of The Walking Dead and Tintin, there’s been an influx of TV-based games of late. Equally there’s been a resurgence in the side-scrolling platformer, with Rayman Origins among the highlights. So it comes as little surprise that Supermassive Games and Sony have decided to combine the two with an attempt at a half decent Dr Who game. Judging by the Timelord’s previous dismal outings, the odds of a smash hit were stacked against it. 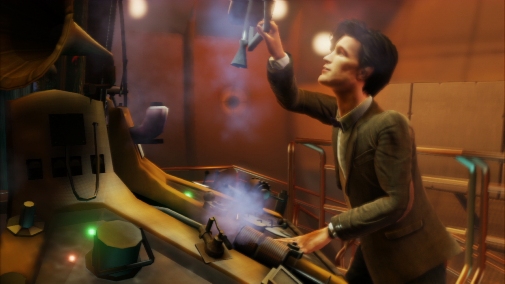 Dr Who is back… but is it worth your time?

Having set aside the fact that I’ve never been particularly taken by Dr Who’s escapades in their various guises on television or console, I must admit that I was buoyed by my first impressions of the game; the presentation is good and the graphics are decent enough. Crisp and clear, it’s based around a pseudo-3D environment and all looks very pleasing to the eye. The good Doctor and his trusty sidekick River Song look the part, benefitting from being motion captured and their TV counterparts  (Matt Smith and Alex Kingston) lending their voices to the role. The script for the lead characters is particularly good, with actions peppered with their trademark humour. It’s well implemented and will be particularly welcomed by fans of the show.

Along the way you’ll also come face to face with some of the much-loved bad guys from the show too, such as the Cybermen, stair-hating Daleks and The Silence. You’ll also get to wave around the Sonic Screwdriver. Several factors that will no doubt leave fanboys weak at the knees. 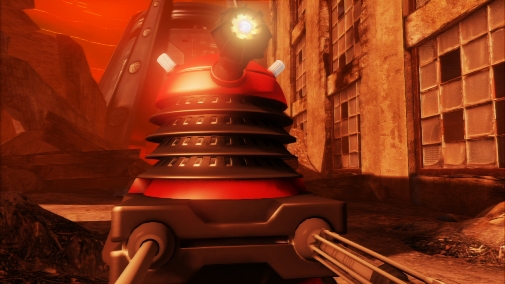 Many of the Doctor’s foes make an appearance

Essentially a 2D platformer, the visuals use a 3D effect to add depth to the surroundings. But besides being a little nicer aesthetically, there’s little point to this in playability terms – other than occasionally seeing enemies approaching. An example of this is when you’re running across train tracks in the Underground level to escape the incoming legion of Cybermen, who you can see approaching in the distance. It looks pleasant enough but is ultimately pointless.

Fans will be pleased to see the Sonic Screwdriver appear in your limited inventory, which you can wave around the screen to highlight moveable objects or buttons, accompanied by a caption indicating what needs to be done. Often these tend to be fairly simplistic puzzles, which must be completed within a strict time limit to progress.

The AI is often laughable with your enemies tending to be either blissfully unaware of your presence and downright stupid, or uber-sharp with eagle eye vision. The lack of any real combat ability means that when you are spotted you can’t even fight them off, instead having to run away or just take it like a man and prepare to restart the entire section over… 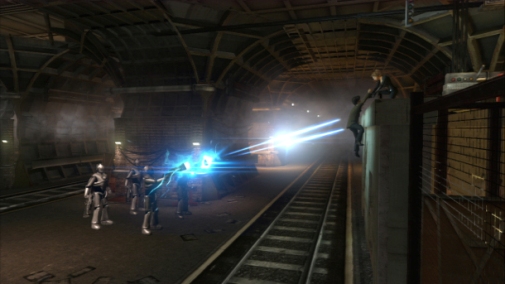 It looks decent but the 3D effect is largely pointless

…Which brings me to the next gripe. Checkpoints are few and far between – and the occasional difficulty spikes or AI frustrations mean you’ll often perish and have to retread a lot of ground to attempt the same part again. Seeing as The Eternity Clock is so clearly aimed at a younger audience, this could test some gamers’ patience.

Parts of the game require Dr Who to work with River to solve those aforementioned puzzles – not a bad idea in its own right but that troublesome AI means it doesn’t work too well in practise. During our playthrough we saw River running on the spot, stuck on a box, walking repeatedly into walls and refusing to press a button to help us pass… the AI sucks! The option to play co-op is therefore most welcome.

Play The Eternity Clock for a few hours and you’ll have seen and experienced pretty much all there is to see. This is by no means an awful outing for the Doctor but it again fails to capture the essence of the TV shows. Ultimately, it’s a reasonable effort but by no means an essential purchase.

The AI is poor, puzzles repetitive and checkpoints few and far between. There are just not enough positives to make you want to play this to the very end

Final Verdict:
MEDIOCRE
Dr Who is back and River Song is along for the ride. Take on some of the series' infamous enemies and face a race against time. Fans will love this... the rest of you, not so much
A copy of this game was provided by Developer/Publisher/Distributor/PR Agency for review purposes. Click here to know more about our Reviews Policy.