Posted By Shubhankar Parijat | On 07th, Dec. 2010 Under Industry News

The new expansion pack of Dragon’s Call: Sacred Wings, which includes Sky City Arena, Combine Magic Formation and Glorious Wings, is about to be released soon, and so, EverDream Studios have decided to release some info. 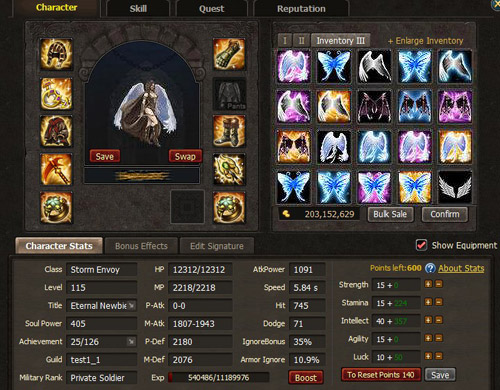 Players are allowed to enter the Sky City Arena and take part in different tournaments. Preliminary tournaments will be held from every Monday to Thursday and 16 final winners will compete for ultimate victory on every Friday. As long as players participate in tournaments, they will be able to claim Exp in accordance with the points they have earned. Aside from that, a special and practical item- feather has been prepared for the final 16 winners of each group every week.

If only players advance to the final 16 in a week, they will be rewarded with a certain number of feathers based on their rankings. As the symbol of glory, feathers can be converted into newest wings. Wings requiring different feathers are attached with different Action Points. The highest-level Battle Angel Wings for males and Wisdom Angel Wings for females will bring 12 Action Points for players. In addition to such benefits, with cool and shinning looks, various angel and evil wings will make players stand out in the game.