Fantastic ideas are ruined by a lot of poor game design in this ambitious role playing shooter.

Many blockbuster games are a sad case of a fantastic execution of no ideas. Name any big military shooter and you often see it, a series of soulless set pieces that, whilst incredibly immersive and fun to play, fade out of the memory just as quickly as they occur. I’d argue that the industry needs more ideas, but Dust 514 is an unfortunate example of a really cool idea that just lacks the polish and finesse to do justice to its ambition.

Developed by CCP games, the guys behind massive online title EVE Online, Dust 514 is an online FPS that serves as an accompaniment to their sci-fi MMO. It’s a fantastic concept, having players take control of the individuals that make up the huge mercenary groups in the EVE universe but, even if you discount a lot of boring gameplay ideas and sketchy design, the integration between Dust 514 and Eve Online only tangibly affects the PC MMORPG. So, unless you’re part of a large cross-platform corporation, you won’t be feeling the true effects of galactic conflict as a Dust 514 player alone. 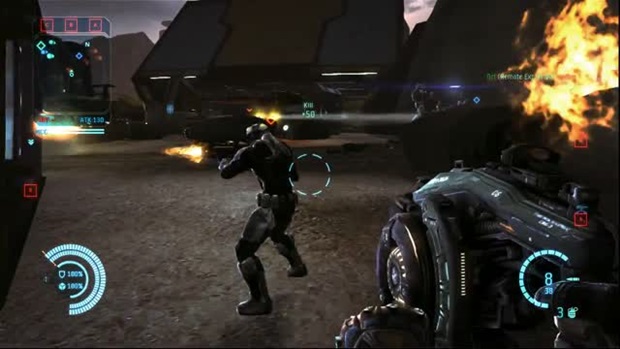 You won’t really feel much of anything when playing Dust as, whilst the action is serviceable, gun mechanics lack any sense of weight and satisfaction. The movement always feels a bit too floaty to keep you truly immersed in the game and, despite fairly functional hit detection, weak sound effects and player feedback make gunning down your foes an underwhelming experience.

"Despite sporting a vast roster of stages that accommodate many planets in the Eve universe, the maps themselves lack the panache and focused design of other shooters."

Tight mechanics aren’t always the order of the day though, with plenty of online shooters making up for this with huge and diverse maps and objectives. Dust 514 doesn’t really succeed in doing this in the same way as great series like Battlefield and Star Wars: Battlefront have done in the past. Though you can see ships in the distance and each teams’ mobile command centre orbiting the vicinity, the sense of scale just isn’t there.

Part of this is due to the graphics, a mish-mash of lifeless animations and mediocre textures. A lack of grandeur also comes from the level design itself. Despite sporting a vast roster of stages that accommodate many planets in the Eve universe, the maps themselves lack the panache and focused design of other shooters. 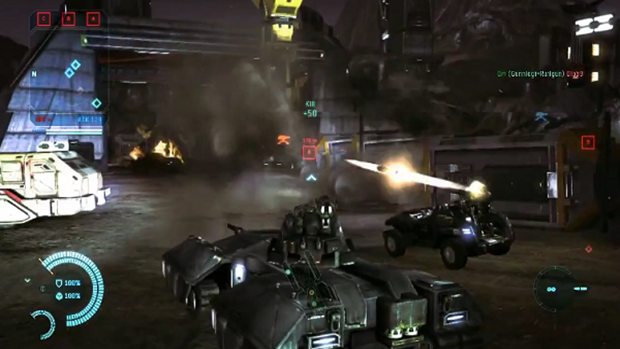 What Dust does share with titles like Battlefield is its vehicles, an inclusion that certainly grants the game a greater scope. Tank type vehicles can be summoned at any time, and a series of other mounted turrets provide a tactical advantage if used correctly. Having said that, it took me a long time to realise that this was the case due to the game’s awful tutorial.

"Dust 514 has easily the worst tutorial I've seen in a modern generation game, throwing so much text your way that you'll probably damage your vision trying to read it all in one go. "

Dust 514 has easily the worst tutorial I’ve seen in a modern generation game, throwing so much text your way that you’ll probably damage your vision trying to read it all in one go. Clunky and poorly designed menus add to the initial confusion that is likely to bewilder any new Dust Mercenaries.

Certainly a part of this lengthy tutorial is due to Dust’s inherent depth. Though the shooting mechanics may be rather plain, the skill and advancement options are vast, with deep and meaningful character development for those who wish to really commit to CCP’s role playing shooter. It’s easy to argue that the lengthy investment required to earn those skill points can turn the game into a bit of a grind though, but it is one that becomes immensely rewarding when handled correctly. 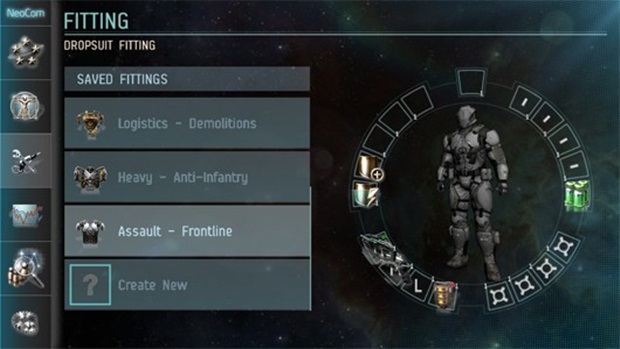 Where your character customisation gets a bit unweildly is when you take the game’s transaction model into account. The free to play nature of Dust allows you to play the full game without spending any money but, if you do splash out on a fresh piece of gear, your purchase only lasts until the next time you die.

Though in-game currency is abundant enough to counteract this, paying real world money for a one use weapon may tally up if you find yourself falling in battle a lot. This kind of pay to win system isn’t especially endearing, but the implementation of F2P transactions in Dust is fair and honourable.

"When you do get a good game going, Dust 514 can often come into its own against adversity. "

Whether you pay or not, a series of peculiar design choices often get in the way of Dust’s joyous character advancement. Glitches of varying severity are painfully noticeable and a few control eccentricities add to the feeling that Dust 514 should have spent a little bit longer with the quality assurance team. Other areas just feel a little undercooked, most notably the stodgy and poorly optimised mouse and keyboard controls. The choice is definitely a pleasant one, but under-sensitive mouse movement and little UI feedback renders the control options a choice of nightmares. 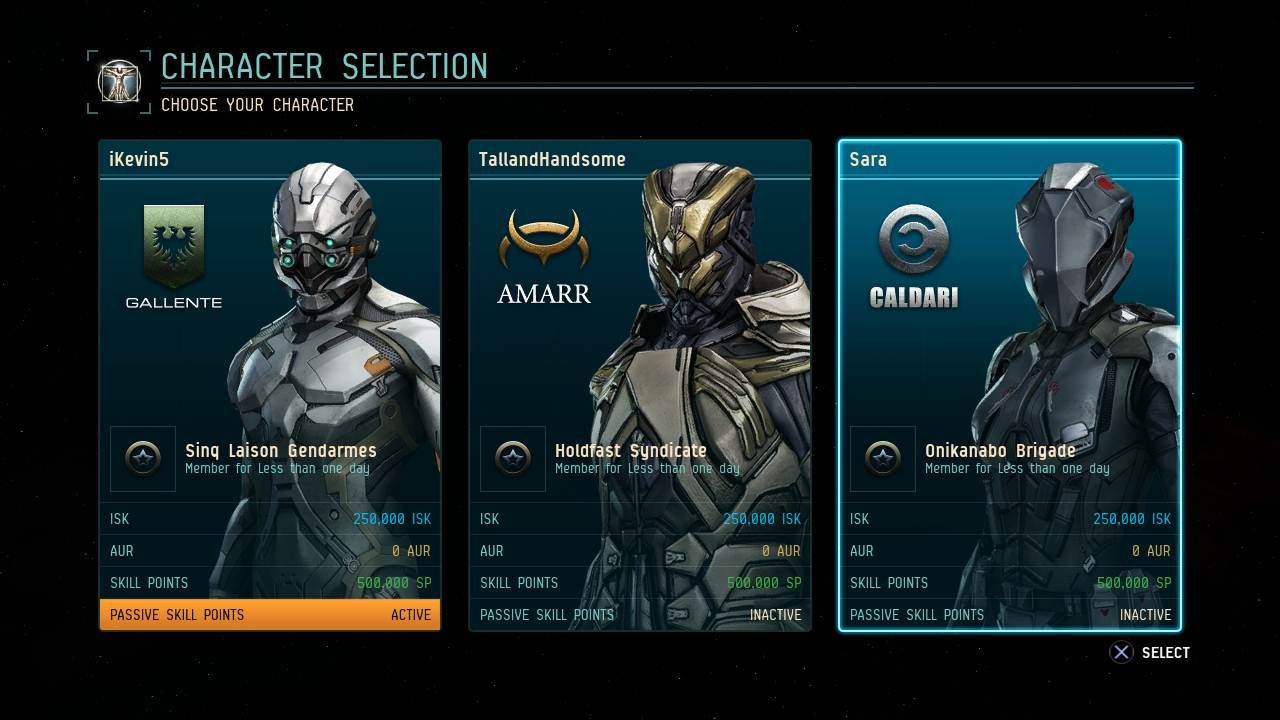 When you do get a good game going, Dust 514 can often come into its own against adversity. Being able to team up with a varied squad composition allows for some seriously tactical pushes and, with support actions being well rewarded, there shouldn’t be any arguments about who has to play the medic.

"For every success there is a crippling failure. "

You won’t find a lot of strangers playing the support classes though, or working together at all really. The large and empty gulfs in Dust’s maps mean lone wolves tend to spread out without any real team work of any kind. Still, bring a group of friends in and you’ll get the best out of Dust 514.

Playing Dust always feels like a game of two halves. Innovative ideas are ruined by some silly design choices, immersive animated lobbies are off-set by bland in-game visuals and the pleasant character advancement is poorly explained by a laborious tutorial. For every success there is a crippling failure and, whilst Dust 514 often can provide a lot of fun when these positives shine through the cloud of poor game design, combining the two halves still only creates a mediocre title. If you love Eve Online, grinding and have some like-minded friends, then Dust’s quirky nature will appeal to you. If you don’t fit into this category, you’re better off looking for alternative F2P games.

A bright idea is not enough to alleviate the mediocre gunplay and visuals of this FPS companion to Eve Online.

A copy of this game was provided by developer/publisher for review purposes. Click here to know more about our Reviews Policy.
Tagged With: CCP Games, Dust 514, free to play, ps3