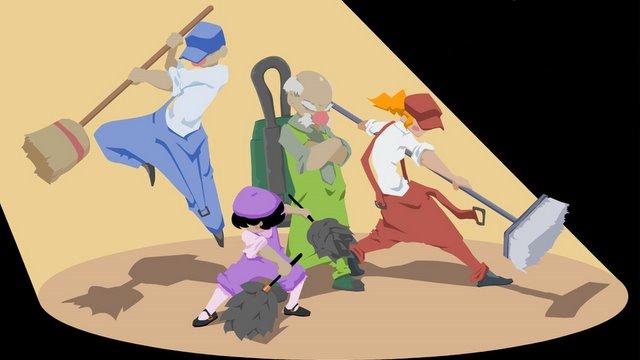 Dustforce has an amazing soundtrack; one that totally immerses you, exhilarates you and completely dominates you, and it is also the pinnacle of sound design considering the budget of the game. You may be wondering why I’m talking about the soundtrack so early in the review, but why shouldn’t I? It’s fantastic; it’s something that makes the game shine; it’s something that is quite amazing, and on the level of an another indie game which I adored called Shatter.

Do you like Trance? No? Unfortunate; but now you do! Because the music in this game will keep you wanting for more and is something that makes gaming enjoyable.

If Dustforce was released with some other generic soundtrack which goes like, “Whoosh, whoosh, dum…!” Okay, no. I don’t know what I just sang there, but you get the point. What if Dustforce had generic music? You really wan’t to know? Okay. First of all, your keyboard would have been in two pieces, or there would have been a hole in your monitor or TV. Why, though? There is a reason behind that.

Dustforce is an extremely tough as nails platformers, but certainly not on the level of Super Meat Boy though, because that’s even insane. The redeeming quality of that game was smooth controls, but here? I’ll elaborate on this in a sec…

Let me talk about the premise first. You control a Janitor who has a broom in his hand, and using that you have to clear leaves that have been scattered around a 2D levels, and most often in places not reachable by a normal human by jumping.

What if the Janitor was like a Ninja with a broom? Yeah… works, right? Of course it does! And that’s what you will mostly do in the game, and as you keep clearing levels and get rated for your performance – the difficulty becomes harder. Sometimes you have to attack enemies in the air, which helps you stay in the air, and this technique is extremely difficult to master.

There is a good tutorial mode here with a fantastic song called “9-bit expedition”. I think I’ve spent hours listening to this damn fine piece of music. Okay so, uh, enough of the music, and let’s concentrate on the tutorial mode, shall we? So it starts off with teaching you the basic things like – jump, dash and attack moves; then comes the tough part where you have to perform incredibly flexible moves to reach impossible looking areas.

Sometimes you fail to do the jump and just struggle till you get the hang of it, and this is where Dustforce’s game design falters. It is outrageous, especially early on in the game for a player to figure out so many things.

You can pick any one out of the four Janitors, and they have their own unique physical properties and skills. There isn’t a lot explained about them, so you have to figure it out on your own. I appreciate giving the player enough choices in picking out the character he wants, but considering the difficult nature of the game, this cannot be termed as generosity by the developers.

Another problem I faced here was, sometimes I was stuck at a point for quite a while which annoyed the hell out of me. I know I’m not an excellent player here, but guys, it doesn’t hurt if the game is a little accessible!

There is also a local 4 player multiplayer, where you have to clean the dust and fight, and dominate. It’s a fun distraction, but it feels so pointless, or something that is tacked on. On the brighter side, the visuals are really good, and do not strain the eyes when you are concentrating very hard trying not to fail. The art design generally suits the colour palette and it is a great combination.

Now when you figure in the awesome soundtrack as well, Dustforce becomes one hell of a game that is worth the money. I won’t bash the difficulty here a lot because surely there are more skilled people out there that have more patience than me – but again, a little accessibility doesn’t hurt. The game is a must buy, especially if you spot it during a sale

Fantastic Soundtrack, Great visuals with appealing colour palette. Challenging platforming which has a lot of depth.

The controls need getting used to as it can become incredibly difficult to pull off some moves. The multiplayer mode is pointless.

Final Verdict:
SUPERB
The game is a must buy, especially if you spot it during a sale. It will satiate your platforming needs, but be warned you could end up punching someone in the face. On second thought, the music is too awesome for you to be riled up to such an extent.
A copy of this game was provided by Developer/Publisher/Distributor/PR Agency for review purposes. Click here to know more about our Reviews Policy.