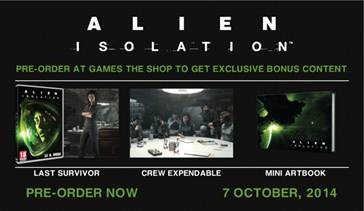 e-xpress Interactive will be selling Alien: Isolation in India, and they have now announced the pre-order bonuses for the territory. Fans of the classic film franchise will definitely appreciate all the content that is available if the game is pre-ordered, including the Last Survivor DLC which is available upon pre-ordering the game from all retailers.

In addition, if the game is pre-ordered from Games The Shop, you also get an exclusive mini artbook. The Games The Shop promotion is valid on purchases made both at their actual physical stores, as well as from their online portal.

Alien: Isolation is the upcoming game based on the classic movie franchise by The Creative Assembly and Sega. It promises an authentic Alien experience to fans of the franchise, offering the kind of action and horror thrills that fans have always pined for in Alien games. Hopefully it is enough to redeem the franchise for last year’s horrific Aliens: Colonial Marines.