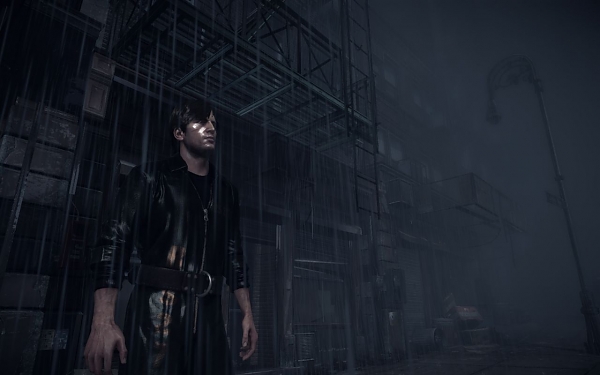 You take the role of Murphy, an inmate whose prison inmate bus has crashed and are left with what you have from there to move on. There are two aspects of the game which are the main character and the town itself. ‘Downpour’ has something that Silent Hill 2 kind of started with the town and all the strange things that happen depending on who is there, where the game could have had different vignettes about all these different people that would tell a greater story about the town as the developers put it. After Silent Hill 2 the games focused more one that cult aspect seen in the other games. The sound is as always a huge aspect in the game with all of it being stereoscopic. Murphy, the main character even has different positions he will stand or walk in depending on the situation at hand, from frightening moments to him being hurt. Downpour will also have multiple enemies.

If you pay attention enough you will also notice homages to previous Silent Hill games like the Jukebox seen playing in the demo for ‘Downpour’ that was from the first Silent Hill. The camera system has also been brought back to the way the older games were, where you don’t always have control of the camera system. One of the enemies I saw was something the developers called ‘the void’ which almost looked like a black hole and was pretty freaky along with the fact that running away from it was how they reacted to it in the demo. One thing that I was happy to hear the developers mention was the fact that they did not want the player to have to go back and retrace a lot of his steps in the previous games, which was kind of a pain in the ass, as they wanted to steer away from that. Another enemy that was in the demo was one that screamed and disoriented you and the developers mentioned that running away is indeed a good strategy especially if there are more than a few enemies around. The game will also have all new enemies and there will be three different difficulty levels when it comes to the puzzles. After the demo we had a short time for some group Q&A with the developers.

Q: With the name of the game being ‘Downpour’, how much of an impact will water have on the gameplay?
A: A lot, it is not just there for intrinsic value at all, it actual ties into the back story and it is about the psychology of the main character so water does factor into that.
[Later the developers revealed that the more rain there was the more enemies would be roaming the the world and the rain system is completely unscripted.]

Q: How is the absence of composer Akira Yamaoka affected the mood of the game?
A: We were obviously in a tough spot when he left Konami with the musical atmosphere playing such a big role in the Silent Hill game. We had to search for a new composer and were fans of the quieter musical moments in the game ‘Dexter’, while feeling that those moments did not sound strange if played in the backdrop of Silent Hill. Bringing in the ‘Dexter’ composer Daniel Licht, we did not tell him to mimic Akira Yamaoka and we feel that the music is pretty authentic.

Q: Silent Hill 5 was criticized for its streamlined combat engine as it, in effect, detracted from the horror by empowering the protagonist. What role does combat play in Downpour and do you think combat should be handled in a Survival Horror game?
A: Our combat is very much designed to dis-empower the player so you don’t feel very capable or very safe. You will not have a full arsenal on weaponry or a giant inventory system. Whatever you can pick can pretty much be used as a weapon and all the items you pick up are destructible. So if you happen to find a hand gun and then run out of ammo for it you might want to holster it, to wait to find more ammo, rather than using it as a melee weapon as is may break.