EA Sports UFC 3 might have caught your attention for its sheer attention to detail and its brutally realistic way of portraying fights. This is a game where every action has a particular cost and consequence. Your fighter’s stamina determines what kind of actions you can perform. While a heavy attack might deal more damage, it also leaves you open for the enemy to attack in case your initial attack doesn’t connect. Due to these complexities in the fighting system, it can be both frustrating as well as extremely rewarding  to play this game. Whether you’re veteran of the series, or a new player, this guide has you covered. If you’re ready, then let’s get started!

Combat when standing up

When standing up, you can target different body parts of the opponents to strike. Each strike costs stamina and the lower your stamina, the less damage you deal and the more damage you’re dealt. Each different body part has its own health meter which drains as they take repeated hits. If a particular body part is damaged enough, it leaves the fighter open to knockout, knockdown, and stun.

Always pay attention to your opponent’s attack patterns and strike back accordingly. You have to be very careful about using your attacks and not wasting stamina since missing a strike will cause you to lose more stamina.

In case you already initiated a strike that you know is going to cost you dearly, you can quickly choose to cancel the strike by holding the high block. This can also be used to fake attacks so as to confuse the opponent. If you know that a particular attack is going to be blocked or counter, make sure you cancel the strike using this method as it can suddenly give you an upper hand.

If you land a strike at any point when your opponent is also about to strike you, this new feature known as stopping power kicks in. This basically reduces the damage you take from a particular attack and it may even end up stopping the opponent’s strike completely. It’s a great way to counter certain attacks thrown at you by the opponent, so make good use of it!

One of the best ways to get better at this game is to participate in the single-player challenges that are available. These are unique scenarios that test different aspects of your skills such as defense, offense, combos, etc. Challenges  can range from having to land a particular kind of attack a number of times, or not getting hit too many times. Each challenge also has multiple difficulty modes including Normal, Hard, and Insane difficulty settings, so it’s a great way to train yourself in those parts of fighting that you want to get better at. 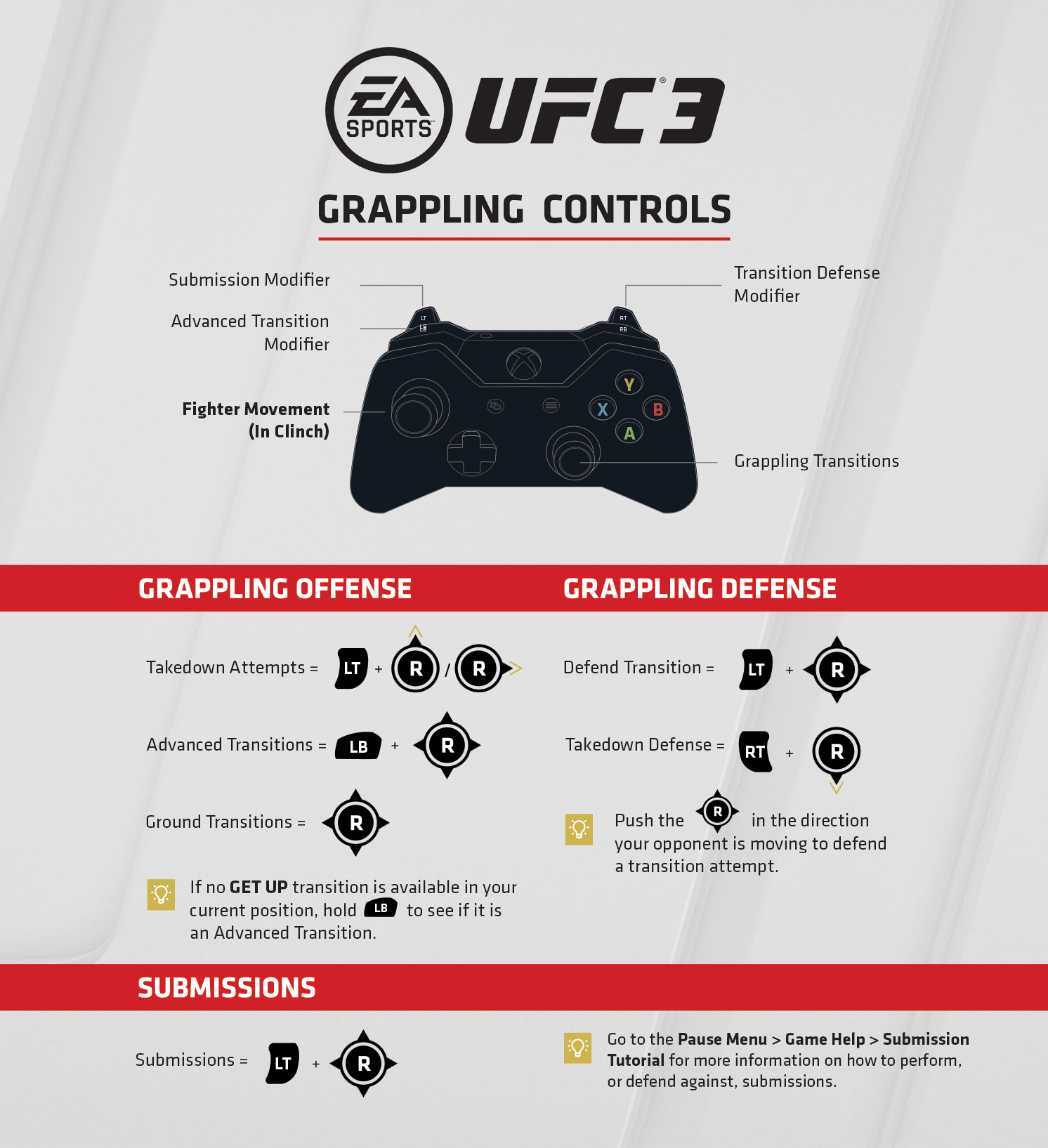 If you want to get into the ground game, you need to use Left Trigger + Right Stick left/right.The ground game allows you to get into a position which will allow you to perform a submission. Once you’ve got into a suitable position, just hold down Left Trigger to see what options are available to you when trying to perform the submission. You can now see in the HUD in what direction you need to move the right stick. Remember to keep holding the Left trigger and once you’ve also moved the right stick in the appropriate direction, your fighter will attempt to perform a submission.

You also have to try and block attacks when you’re on the ground. You have to time your escapes and you can then follow up with a successful block. You also need to be clever about the ground game and sometimes it would be more beneficial to try and get back up or to shift into a more favorable position. Additionally, you can also try to perform a sweep so as to gain the more dominant position in a fight.

HOW TO ESCAPE GRAPPLE

It can be a really dangerous position to find yourself on the ground and your opponent is throwing some deadly hits your way. Just stay calm and try to block the opponent’s attacks.  If you are able to successfully block the opponent’s attack, this gives you room to try and gain the advantage. You can try and shift into a half guard position by using the left analog stick and moving it either left or right. Additionally, you can try and use an arm trap by holding R2 and then quickly moving the right analog stick to the left or right. Be careful when trying this because it leaves you open to some devastating attacks if you’re not able to perform the move properly.

If your opponent has you in a clinch against the cage, you can try to deny the clinch by holding the right trigger and using the right analog stick. It is possible that your attempt at denying the clinch may fail. If it comes to this, then your best bet is try and use a ‘take down’ against the opponent using your grappling HUD.

Leg kicks can be really useful  as they cause a lot of damage but they also carry high risk.  Leg-kick damage does not recover which makes them very useful later on in fights. However, Leg kicks can also be countered so you have to be careful when using them. To counter a leg kick, simply use a low block by holding the left and right trigger buttons. Since leg kicks can be countered, make sure your opponent does not see one coming. Use them in the middle of combos and be unpredictable to get the best out of these attacks.

Check out the video below to learn more about leg kicks.

Learning how to perform submissions successfully and countering your opponent’s submissions is crucial. If your opponent has you locked in a submission, you just have to use your right analog stick to push any one of the break walls to the edge of the submission HUD. Your opponent will try to stop you by matching your direction, so move to a different break wall if the current one isn’t moving. Just stay calm and keep pushing the break walls and you’ll soon be able to escape. Check out the video to learn more about submissions.

Additionally, you can modify where your attacks land by using the Left Trigger. This can be used to target a particular body region of the opponent. Check out the video below to learn more about striking.

If your opponent is unleashing some deadly combos against you or if you find yourself stuck and unable to plan ahead, then always remember that you can rely on using blocks to keep yourself from getting hurt. However, this is not something you can just use indefinitely and there are certain limitations you have to keep in mind. Pay attention to the block meter which  indicates how many more hits it’ll take to break down your block.  To effectively use blocks then, you’ll have to use them carefully along with using some clever footwork, switching stances, and getting some hits in against your opponent. Relying too much on the block will just end up exhausting you and then leave you open to attacks. Use the block wisely and it just might give you the time you need to turn a fight around.

When you’re standing up and fighting, you need to try and unleash your fighter’s devastating combos on the opponent. To do this, you’ll first have to learn your fighter’s combos and figure out what situations each one is best suited for. You’ll also have to block your opponent’s attacks as you attempt to get your own attacks in. Sometimes, you can’t just rely on blocking and so you’ll also have to use good footwork so as to gain an advantage over the opponent.

You also have signature moves or special moves you can use by pressing the R1 modifier. Make sure you learn how your fighter’s special moves work and use it in the right situation!

You can also make your fighter run so as to quickly close a gap between your fighter and the opponent. To do this, just use the left stick and then press it in the direction of your opponent. This will make your character move forward quickly towards the opponent. Additionally, when standing up, you can also use a clinch against an opponent by using the Left Trigger along with the right stick. To learn more about how this works, read about it in the following section.

A clinch is basically grappling at close quarters and can be used to deal great amounts of damage. There are high risks involved in using a clinch since your opponent can turn the situation around by taking you down, performing a submission thereby leading you to take heavy damage. However, a clinch is really useful to deal high damage very quickly. You can use a clinch by pressing Left Trigger + Right Stick Up or Left Trigger + Right Stick Down.

Once you’ve used a clinch, you can also go straight to ground fighting by holding Left Trigger to bring up ‘take down’ options and then selecting one of these using Right Stick. If your opponent puts you in a clinch, you should focus on defending yourself and building up your stamina. You can also block attacks using the same buttons as when stand-up fighting.

There are a whole number of multiplayer modes available in this game that makes it a great game to play with friends as you hone your skills at fighting. The following are the different multiplayer modes in the game.

In this game’s career mode, you need to take care of both your skills in the fighting ring as well make promotional choices that help increase your fans. As you get better contracts you can get more cash and better access to training equipment which helps your fighter becomes stronger. You need to manage your fighter’s skills and also manage his many fans. Slowly and steadily then, you’ll see your fighter become the Greatest Of All Time.

The game’s career mode will properly kick off with the World Fighting Alliance. If you’re able to impress those scouting new talent, then you’ll soon be able to fight in the UFC. If you don’t, it’s not a big deal as you’ll have plenty of opportunities to prove yourself later on as well.

In Ultimate Team mode, you get to assemble your very own dream squad to own the Octagon.You will need to know more about sets to be able to do this. Sets are basically a  thematic collection of Ultimate Team items that rewards you with new cards. As you trade more and more, your power over the Octagon also slowly increases. Make sure you build your fighter with Ultimate Team before you start playing the game online.

As for the crafting sets, completing a specific set will net you either a lot of tokens or some specific items such as Gold moves, Gold contracts, etc. You can complete the set by trading in items that are of the same tier. After you trade in these items, you’ll be rewarded with crafting tokens. Watch the video below for more information on how to build your Ultimate Team.

The following are the secret achievements.