A complete guide for The Elder Scrolls Online.

The Elder Scrolls Online is finally here – or rather, it’s been here for roughly a week. Given the massive size of ZeniMax Online Studios’ MMO though, it’ll take a lot longer to discover everything that the game has to offer. Quest, loot, skill trees, areas, allegiances and that’s really only scratching the surface when it comes to any Elder Scrolls game. What’re you gonna do?

Using this guide you will know all about earning finesse points, synergy, skill points, crafting across alchemist, clothier, enchanter, blacksmith, woodworker and provisioning professions, strategies to farm gold faster, world skills, weapon and armor skills, race and class skills, learn how to become a vampire and a werewolf, sky shards locations and the different guilds with their respective skills.

Furthermore, you can also learn how you can fish and increase storage/inventory space. The article below also consists guides for mounts, lockpicking, Mundus stones locations and how to become an Emperor. We have also covered basic stuff like how to use soul gems and how to fast travel. Finally, following everything in the guide will make you level up faster.

Fortunately, we’ve compiled a guide of everything you need to know about the game. Whether you’re wondering which is the best class for you or curious about the game and what it has to offer in general, check it out below.

Remember the old MMOs? If you have a party of say 5 people and among those one is not at all talented and does not react during a fight, that member will still get bonuses/unlocks. The system is unfair. Bethesda have changed that in The Elder Scrolls Online by introducing Finesse points. Depending on how you perform in a battle, against different enemies, with the right use of block/attack, the game will award you Finesse points. Note that Finesse points will help you recharge your Ultimate Skills which is something we have talked about in detail below.

Synergy requires multiple skills to be combined together to have desired effects. There are potential bonuses that you can earn by using Synergy. Using Synergy will unlock special rewards, Finesse points. Furthermore your team will be able to taken down enemies faster and gain more experience points.

The Elder Scrolls Online allows a vast amount of customization in terms of classes. Depending on what class and race you choose, there are a lot of different combinations and it really just boils down to what you prefer. You can acquire skills three different ways. Number one is through leveling up and every time you hit a new level you get a new skill point. Second way to get skill points is by collecting sky shards scattered throughout the world. Whenever you get three sky shards you are awarded with a new skill point.

The Elder Scrolls Online, just like any other MMO provides a lot of opportunities for loot. But it’s best to get started with crafting as soon as possible. The process might be a bit tough to learn initially but you will get the hang of it once you put your time into it. At the end of the day you will only need the recipes and the ingredients. Bellow you will find an in-depth guide for all the crafting profession. [Courtesy Reddit User Beldorr]. The guide below applies to all the professions in the game including alchemist, clothier, enchanter, blacksmith, woodworker and provisioning.

Please open the images in a new tab/window to see it in full screen. 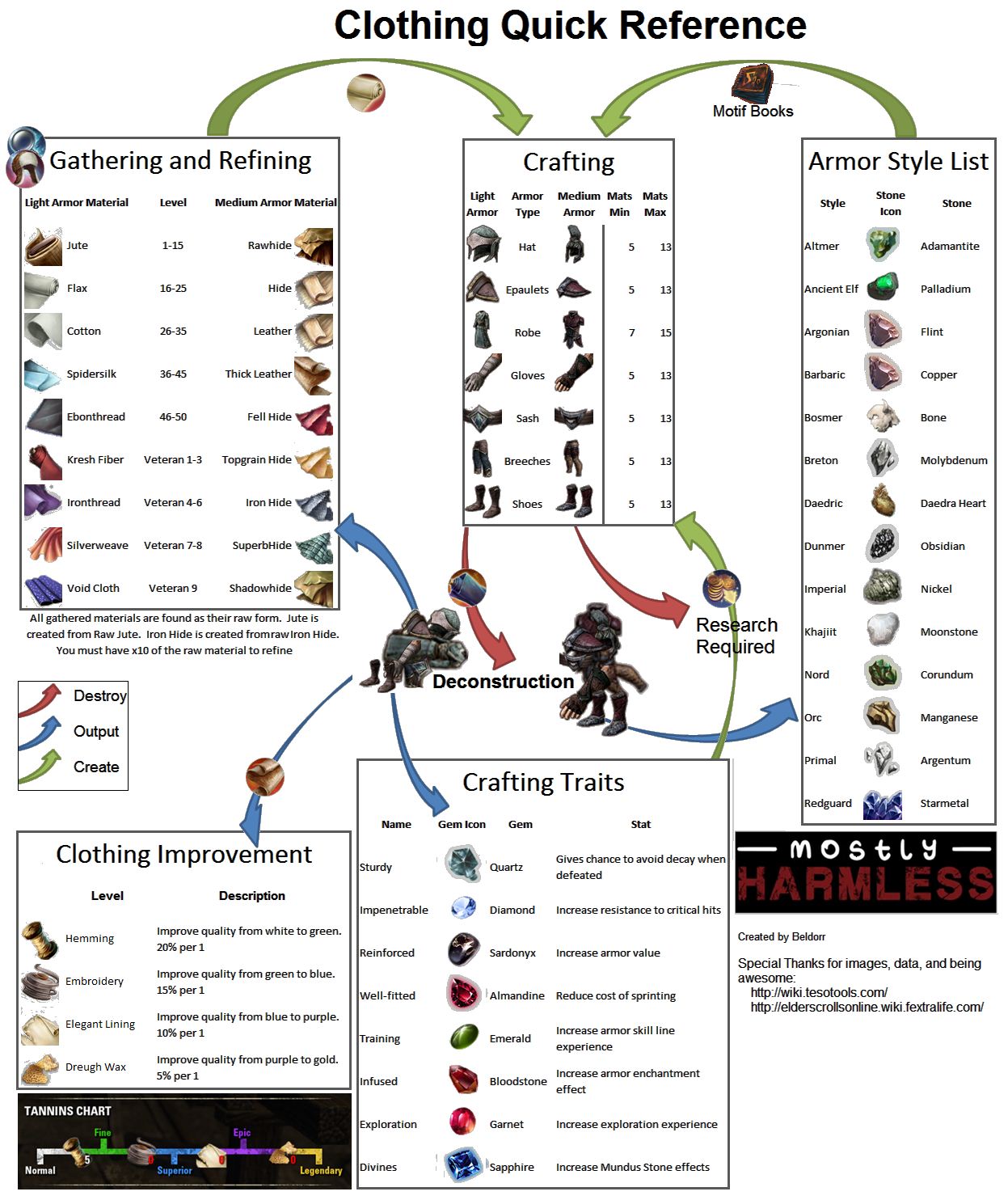 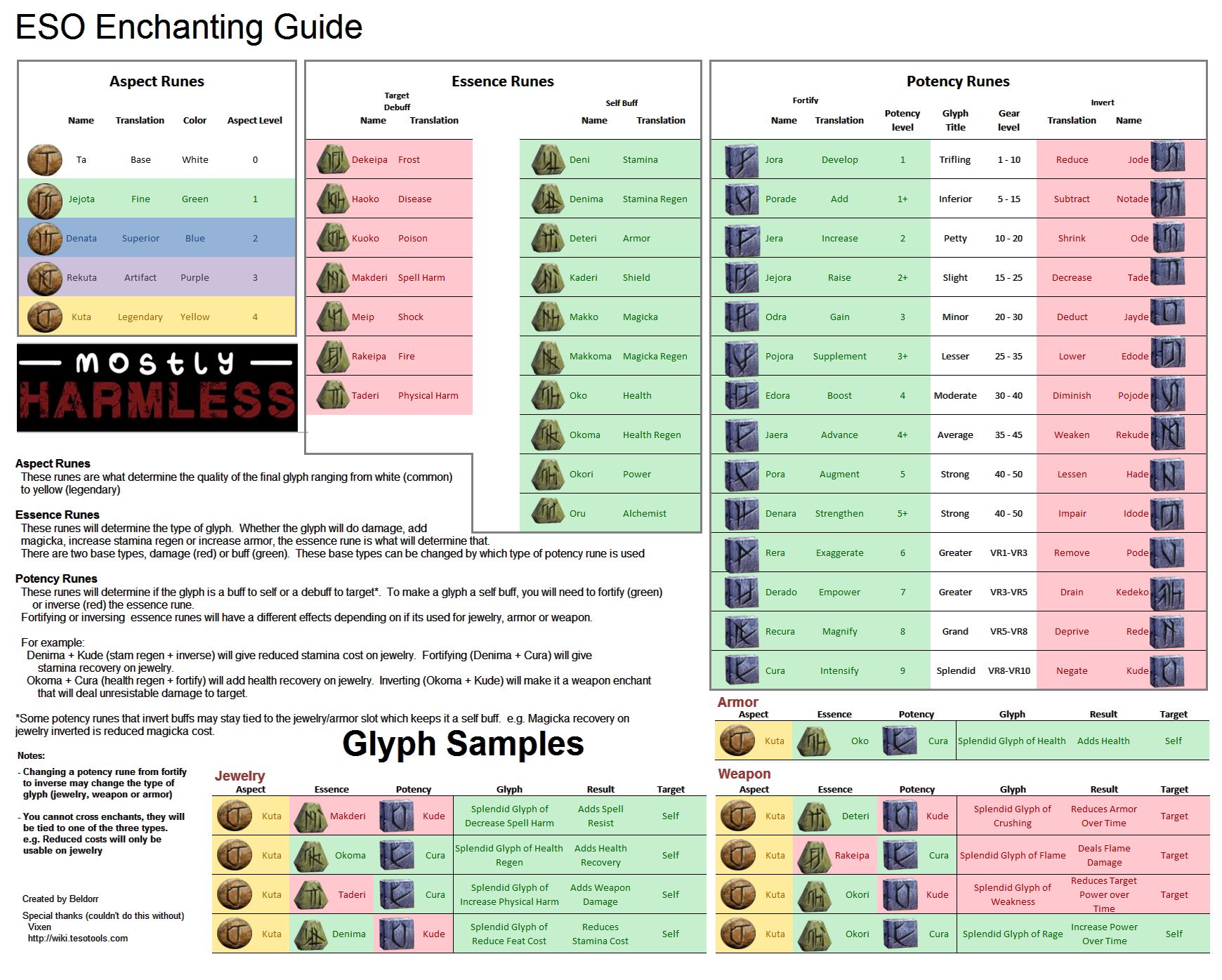 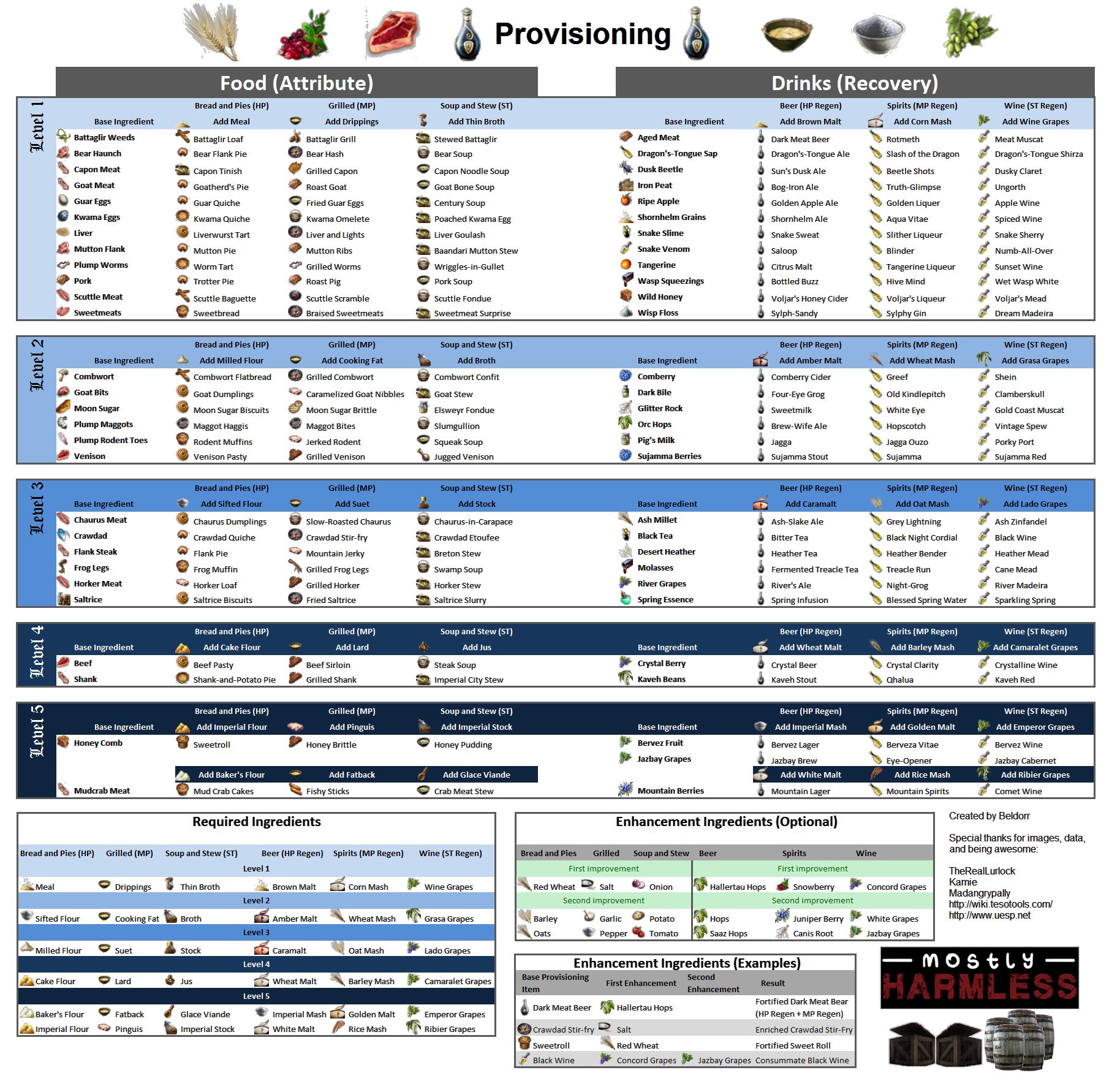 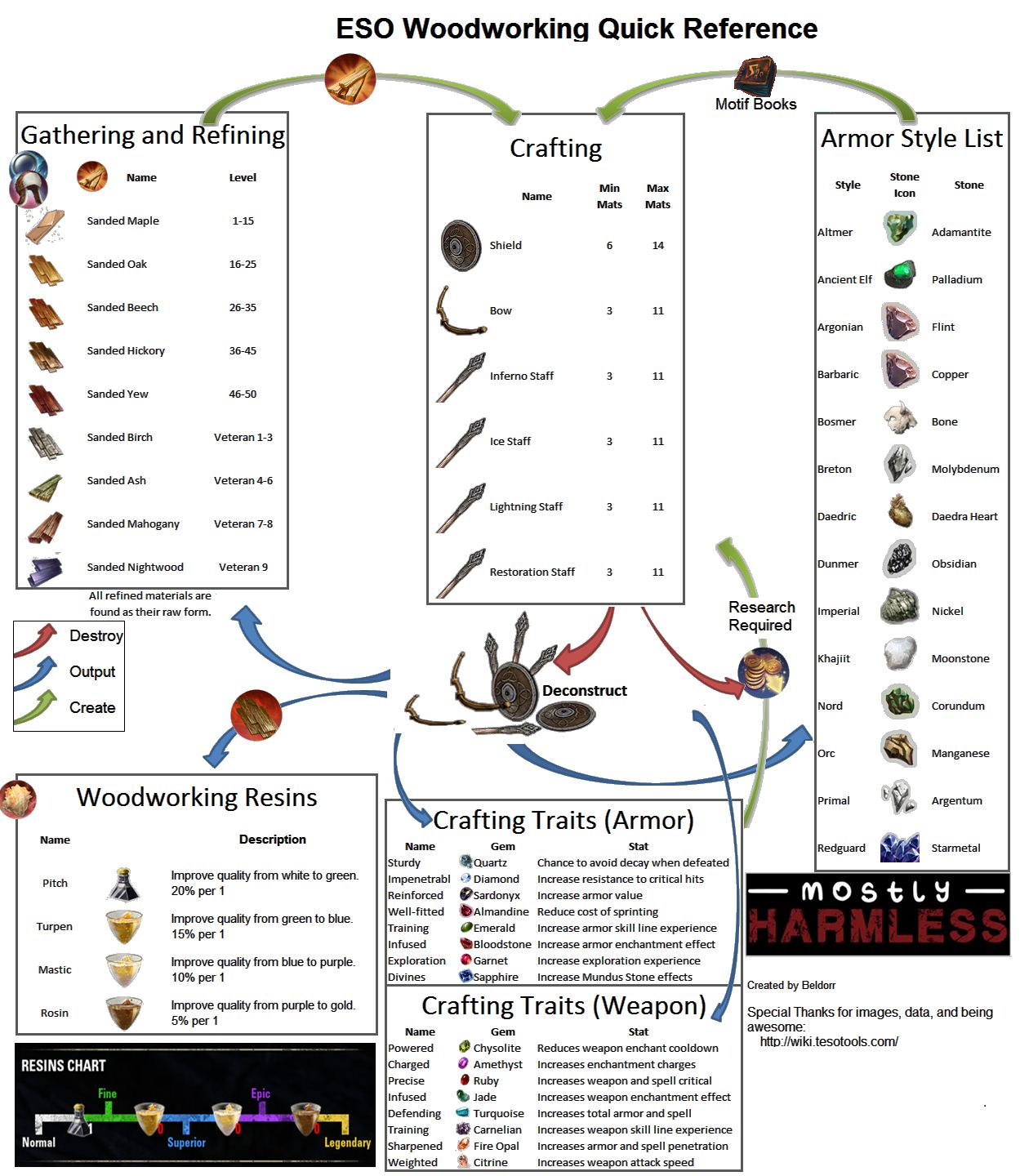 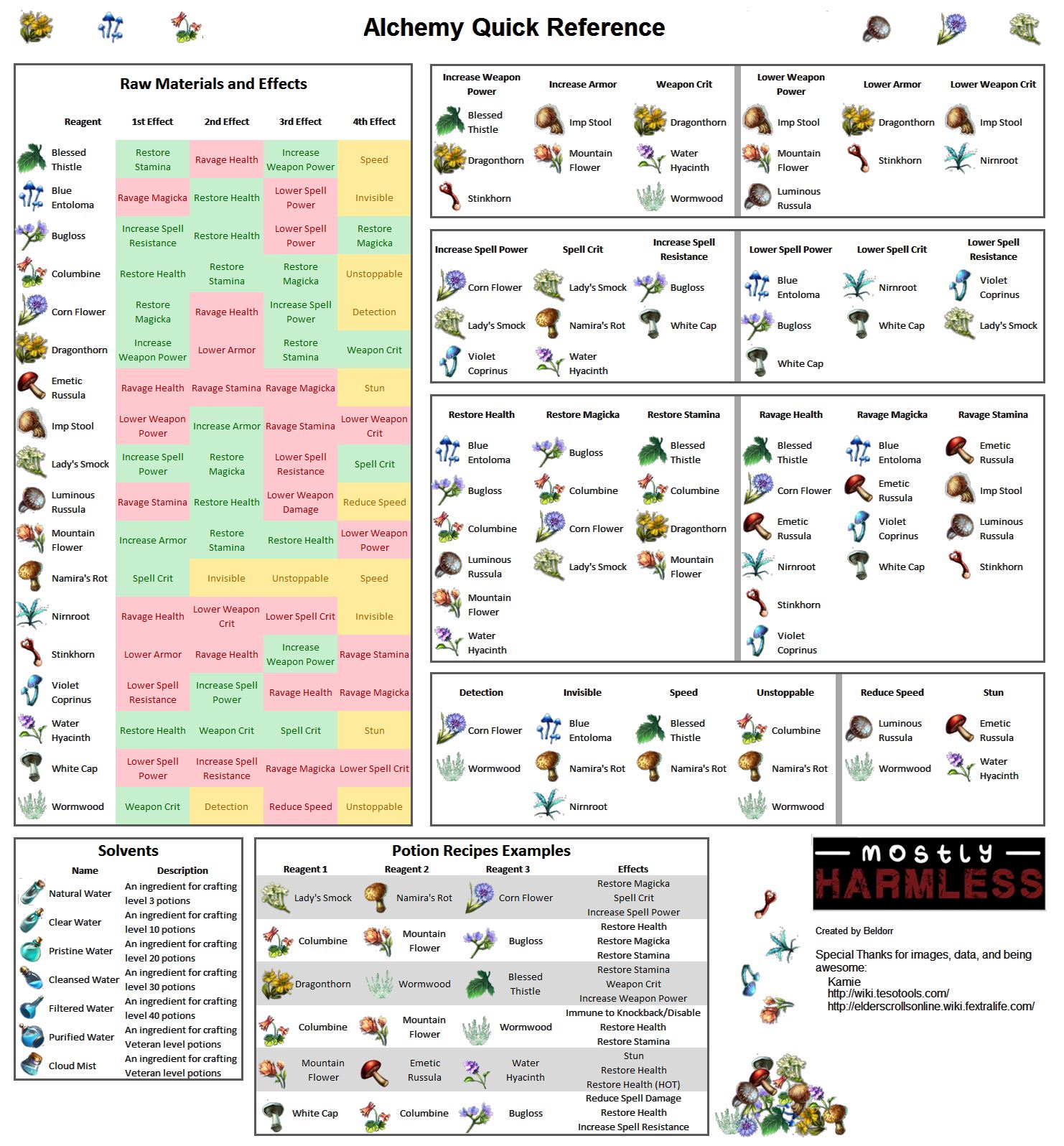 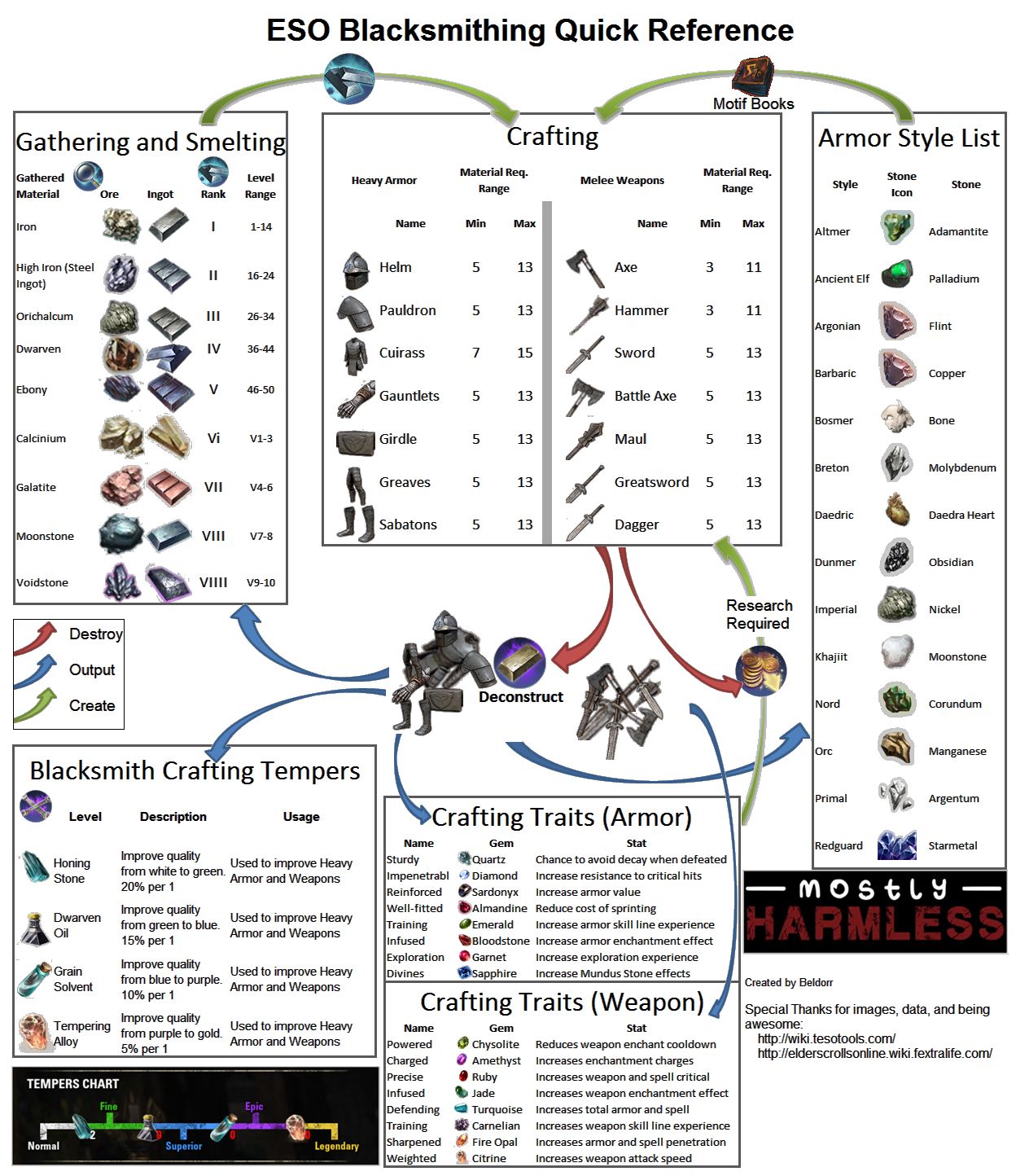 Furthermore, you can check out the video guide below to get a more detailed understanding on how crafting works in the game:

Find out more on the subsequent page.

As the name suggests, these skills are unlocked when you invest your time into exploring the world. There are three types of World Skills that you can acquire and each of them are further divided into passive and active abilities.

Soul Magic: You can capture other souls so that you can further improve yours.

Vampire: You need to find this while exploring and relies heavily on Magicka.

Lycanthropy: This is the Werewolf skill line and is easily one of the most difficult skill lines to unlock.

Each class has 3 skills along with 10 abilities.  Please note you can only master skills for the class you chose [this is obvious!]. Passive abilities remain static and their effects remain with the player, for example health upgrade. Active abilities on the other hand require the player to place it in the hot bar and as such depends on player input and is dynamic. The player is allowed to reset their skill set but note that it will cost you and as such is not recommendable.

One you reach level 4 for a particular weapon or class skill, you will be able to morph it. Morphing allows to add new abilities into an already existing skill and will cost you skill points.

There are six weapon skills in The Elder Scrolls Online. Let us take a look:

One Handed and Shield Skills:

Skills under this category are divided into three types: Light Armour Skills. Medium Armor Skills and Heavy Armor Skills. These are again further divided into passive and active skills. It’s important to note that each of these skills have respective perks and it all depends on what kind of armor you chose. The game does not force you with a single armor skill but if you wish to level up in a particular armor skill, it’s best to collect skills for that category only.

There are a total of 32 skills divided between the 10 races. Let us take a look at them one by one:

Guilds Guide: [this will be updated further after post-launch content is released]

Let us take a look at them one by one:

Mages Guild Skills: You need to find books located across the world in order to become a member. You may received more quests and extra skills tree.

Fighters Guild: You need to search and destroy several Dark Anchors in order to join this guild. They have an overwhelming advantage over Werewolfs and Vampires.

Mounts Guide:  [this will be updated further after post-launch content is released]

Just like in previous Elder Scrolls games, Online sees the player start off the game with no mounts. As you playthrough the game there will come a time where you can’t actually go ahead without a mount. Right now, the only option is a horse. You can obviously buy a Horse in a stable with a bit of the gold. The Elder Scrolls Online had added a bit of dynamism here, the player needs to feed its mount. You can give your horse hay or oats and this will cost gold. This adds a bit uniqueness in the gameplay. Right now there are five types of horses, Normal, Imperial, Light, Gaited and Draft which require 17 200, 1, 42 700, 42 700, 42 700 gold respectively.

It won’t be a Elder Scrolls game if it does not have lock picking. It’s a bit different this time around as the developers have added more dynamism by including a cool down period. The video guide below will make you aware of all things lockpicking in the game.

How to become a Vampire? [Vampire Quest Line]

Ideally you would need to be bitten by a vampire but that is not how it works in the game. You need to find Bloodfiends that appear in certain locations  which will make sure you get infected by vampirism. You can find them in level 37-44 which is Bangkorai, the Rift and Reaper’s March during night.

Once you get this disease, you need to start the Scion of the Blood Matron. This will kick off the Vampire Quest Line and will unlock the skill line as stated above.

How to cure Vampirism?

Simple, go back to the NPC that was present when you started Scion of the Blood Matron quest.

How To Become a Werewolf?

Just like the vampire guide above, you would need to be infected by Sanies Lupinus disease. You would need to encounter a Werewolf NPC [rumors are that some can be found in Cyrodiiil and Grahtwood] so that it can bite you or ask a fellow party member to bite you [provided it is infected by the disease.] This will kick start the Hircine’s Gift quest. This is the same quest that can cure you of this disease as well. 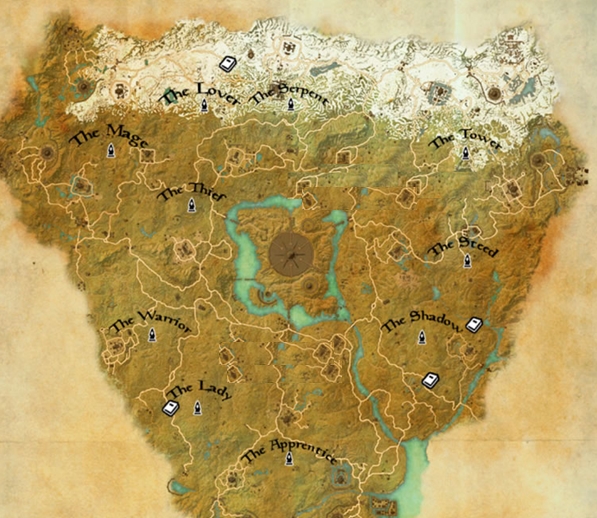 You will be picking up a lot of items in your quest and it’s obvious that you will be running out of space pretty soon. You would need to find one of the many Bag Merchants so that you can buy upgrades. This will cost you gold. The video guide below explains it all.

How To Become an Emperor:

Once you become an emperor, you will unlock the following passive skills:

But the question is how you become one? It’s hard but doable. You need to play the game in a way it’s meant to be played. Be a part of as many as guilds as possible and better create your own guild, play in as many PvP groups as possible, keep capturing territories and gains skills/abilities as described above.

We have a complete video guide below that will help you become an Emperor in the game.

How to use Soul Gems:

How To Fast Travel:

Whatever we have discussed in this guide will eventually level up the player much faster. There is a level cap of 50 in the game and you reach that by following the guide. Basically your entire journey to level 50 is divided between completing quests, crafting, earning gold, skills, abilities and engaging in combat. There are no short cuts in The Elder Scrolls Online but if you follow things in the right order, it definitely becomes easier.

Note: This guide will updated once we have more information about the game.