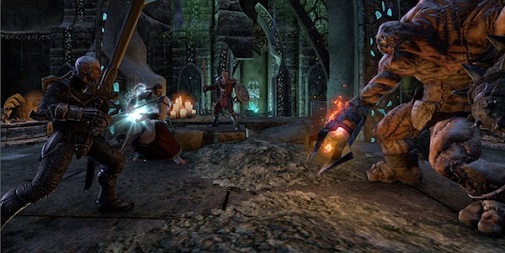 Matt Firor, who’s working on Bethesda’s upcoming MMORPG The Elder Scrolls Online as game director, says that the game’s first person view will not show your hands or your weapons. Which… is weird.

“We are still working on this system, but as it stands right now, we have first and third-person support, just like in any other Elder Scrolls game,” Firor told Digital Spy. “The only difference is that you don’t see your hands and weapons in first-person mode.”

“The main difference here is that in an online RPG, enemies can spawn in a 360 degree radius around you, especially in PvP,” he reasoned. “So third-person view mode, if you use it, will give you a far greater ability to see enemies behind you. In many situations, this will be the difference between living and not surviving a combat sequence.”

Well, it seems like even having a first person mode in this form would be pretty pointless. No one wants to damage their enemies just by clicking on them. But then again, TES has traditionally been a first person franchise.