Eldest Souls takes some common ideas and puts them into a well-made boss rush marathon.

If you enjoy a super sharp pixel art visual style or punishing souls-like combat, then Eldest Souls clearly wants to be the game for you by trying its best to provide a marriage of those two concepts. Not exactly the most original concept in 2021, but while Eldest Souls may not be the first to the party, it is a game that combines its ideas well. The game does end up doing its own thing a little bit more than it lets on with its premise, but with “souls” being right there in the title, it’s a pretty obvious signal to that fan base from developer Fallen Flag Studio.

The story of Eldest Souls is similar in tone to most games of this sort. Humanity is under threat and you play humanity’s last hope to put the conflict to bed for good. It’s a simple set up but also alludes to a tumultuous and complicated past that the game constantly reminds you of with shards of a former civilization all around you. Especially in outdoor areas, shattered buildings and rubble accompany every location, so the game does give you the feeling of being in the midst of a dense lore, despite the context of the current situation being quite simple.

All that said, the similarities between Eldest Souls and an actual Dark Souls game almost entirely end after you account for the high difficulty and the dreary gothic setting. There are no standard enemies per se, and dying doesn’t really make you lose anything (other than perhaps your patience), and I think that works in the game’s favor. Dying and trying again is a loop that is better served by the quickness you might more often find in something like Super Meat Boy, and the overall structure of the boss rush format has more in common with Cuphead than Souls games. So to simply lump Eldest Souls in with the countless other souls-likes would be an oversimplification.

"Not exactly the most original concept in 2021, but while Eldest Souls may not be the first to the party, it is a game that combines its ideas well."

The combat in Eldest Souls is a firm challenge. Bosses are varied, and present multiple types of challenges that need to be identified and conquered in order to even have a chance at taking them down. Using your dodge effectively, managing your stamina, charge time, and knowing exactly when to land a few hits or use a special attack is key to memorizing and surviving each one of the boss’ multiple attacks. Some attacks are more of a challenge of your ability to dodge at the exact right time, while others are more focused on getting you to learn where to stand to avoid taking damage, and some leave short windows of time for you to get a few hits in. All of them require patience and are rarely navigated properly on the first few tries. Most of those inaugural attempts will end in death and will probably do so quickly, as it only takes a few hits from any one boss to kill you – if that. The blood burst attacks often prove useful as they reward you with bits of health as you hack away at your opponent. While the idea of inching your life bar back up is enticing, and fun to do, it can also lead to death quickly if you get slightly carried away with it and don’t keep your eye on the ball. Blood bursts are just as much an invitation to regain some ground as they are an opportunity to accelerate your failure. Overall the combat is good with just enough depth and functionality to satisfy most seasoned players and surprisingly approachable in its relative simplicity compared to other similar games.

The moment to moment combat itself feels good, albeit a tad murky at times. The standard attacks have such short range that you’ll often be getting right on top of the various bosses to land hits, and that doesn’t always mix well with the constant flamboyant animations of you and your opponent. This can sometimes lead to situations where you can’t be quite sure of where exactly you’re at with any given swing of the sword, and thus, whether or not a dodge will register at the moment you need it to. This is partly a natural by-product of the isometric viewpoint, but also partly due to a clash between the idea of needing to be so close to the enemy to hit them, a short window to register a dash between attacks, and the indiscernible cluster of pixels that being right in an opponent can result in.

It’s also important to point out that, despite stamina management being rightfully made one of the games’ many challenging focal points, it can also be a little too easy – at times – to end up in situations where more dashes are required to avoid taking damage than you’ll be able to do in a short moment, requiring you to think further ahead than the game probably needs you to in order to get it’s point across. Getting the hang of the special attacks associated with each style is extremely helpful. Many of the more challenging moments can turn in your favor as soon you begin to truly wield those to their greatest effect. Eldest Souls does not have what I would call a robust amount of combat options, but between the three styles, the health regenerating blood burst attacks, the special moves for each style, and the open-ended flexibility of the skill trees, I’d say there is more than enough meat on the bone here to keep you experimenting and refining your skills all the way through. While I would have preferred slightly less of an emphasis on repetition and memorization, it’s hard to argue with the end result of all of its pieces. It mostly works quite well for what it is. 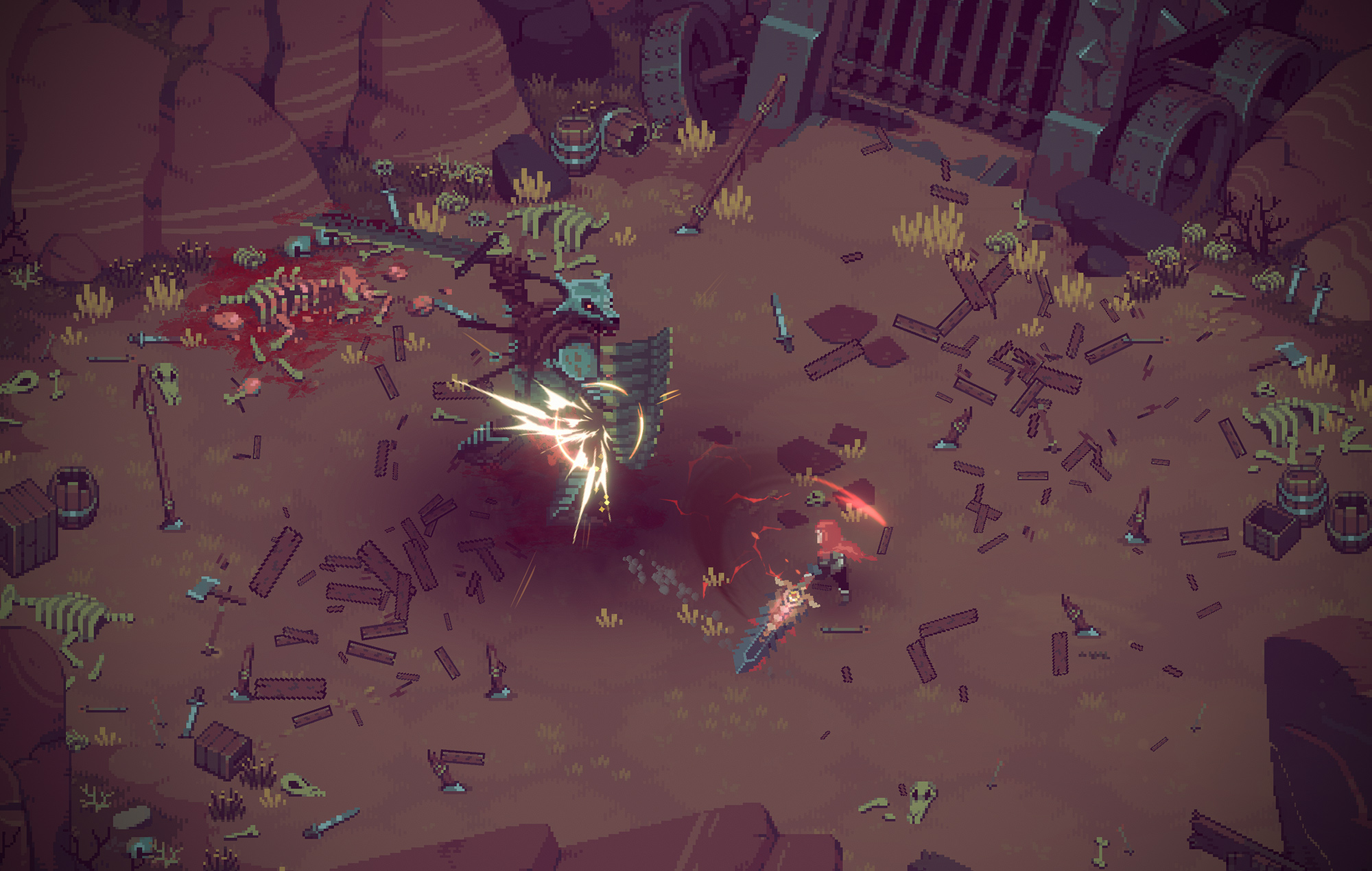 "Eldest Souls does not have what I would call a robust amount of combat options, but between the three styles, the health regenerating blood burst attacks, the special moves for each style, and the open-ended flexibility of the skill trees, I’d say there is more than enough meat on the bone here to keep you experimenting and refining your skills all the way through."

While the game is generally centered around the character’s one, massive sword, which is every bit as big as he is, you do have three different combat styles to choose from, and all have their own respective skill trees that can be completely recalibrated at any time before or after a boss battle. If the elevated defense of the “counter” style isn’t helping you with your current situation, feel free to switch to “berzerk” for higher damage or “windslide” for more maneuverability for your next try. Either way, you can always dump all of your experience points into whatever you choose so going all-in on any one style will never pigeon-hole you into any one area of expertise. This is something that I wish more action RPGs allowed, and makes perfect sense for a game full of enemies that challenge you in such different ways.

Accompanying the levity in-between bosses, you will also come across a handful of explorable areas, some of which might contain items useful to the games interesting but unobtrusive NPC characters scattered throughout. The light explorability in the game’s hub world is a nice palette cleanser between fights and also helps the tone of the game’s lore ring a little truer as you learn just a little bit more about it each time.

The art style, much like the general story of Eldest Souls, is nothing new, and doesn’t stand out much in concept. Super sharp pixel art will always be pleasing to the eye, and it’s executed well here, but it doesn’t ever really feel like it’s utilized to its potential, either. Most of the game’s areas look fairly similar, and will rarely if ever surprise with their color pallets or visual depth until the final area. It’s far from bad, but I couldn’t help but notice the lack of variety and overuse of the same drab cool colors and earth tones for most of it. Conversely, visual variety is indeed present and consistent with the game’s 10 entrancing bosses, which is where that effort is needed most I suppose. They all vary greatly in shape and size but still feel very much like a part of the dark ruthless world they inhabit. The bosses are so unique and interesting that the intrigue of finding out what the next one is all about often becomes a huge part of what drives you forward through the game, and that’s a great thing to have in a boss-rush game. 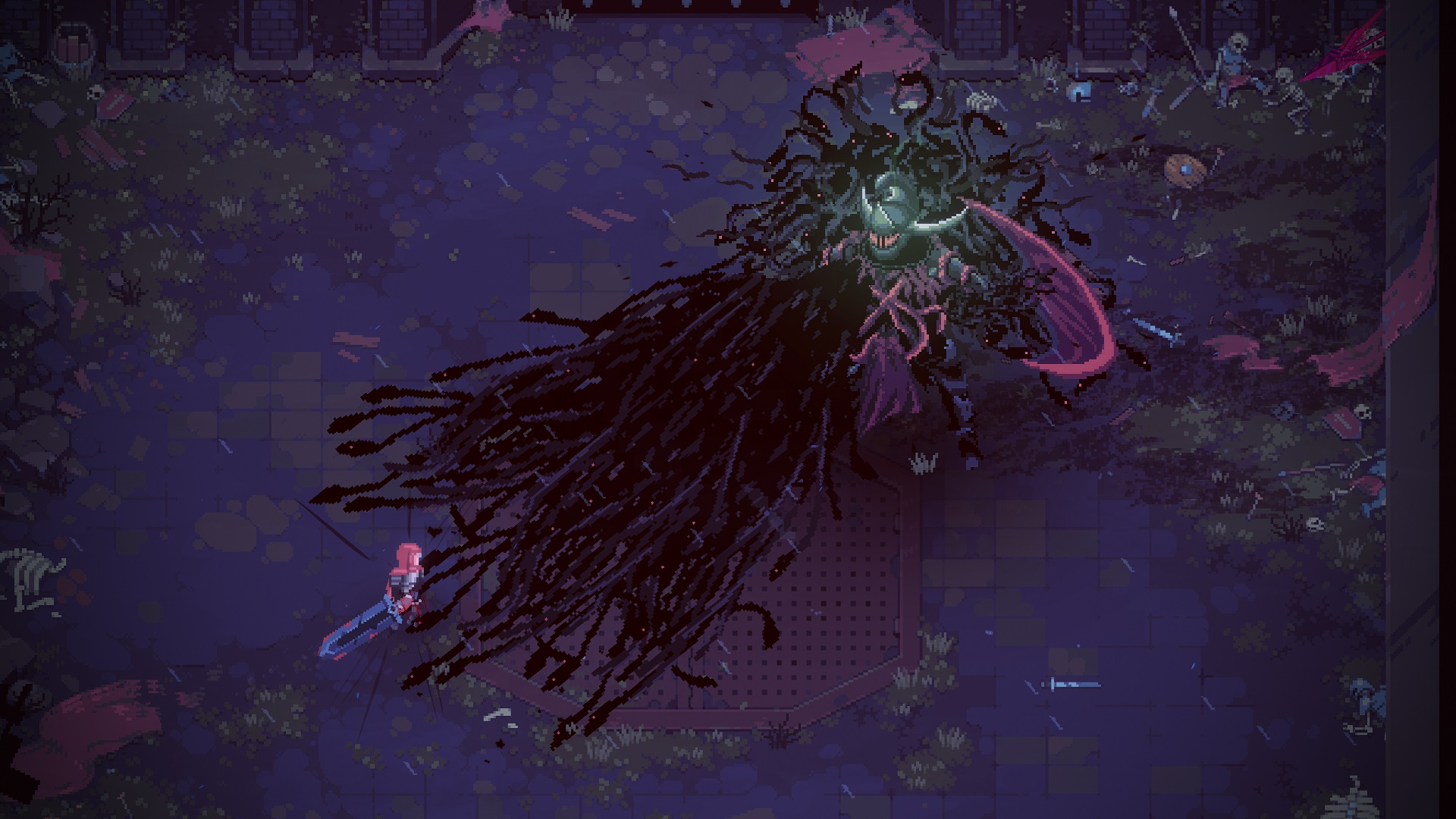 "Most of the game’s areas look fairly similar, and will rarely if ever surprise with their color pallets or visual depth until the final area. It’s far from bad, but I couldn’t help but notice the lack of variety and overuse of the same drab cool colors and earth tones for most of it. Conversely, visual variety is indeed present and consistent with the game’s 10 entrancing bosses, which is where that effort is needed most I suppose."

The game’s music also seems to strike the right tone with lots of brooding chords on the low end that loom over the games calmer segments, but appropriately heats up in tempo and intensity during fights. It’s not a soundtrack I would recommend paying extra to have, but it fits the game just fine. Sound effects follow suit with slashes and bashes that don’t overwhelm the music, but stand out enough to let you know when you’ve been hit or landed one of your own.

Eldest Souls isn’t going to blow anyone away with most of its ideas, as they’ve all been done countless times before in different games, but this particular union of art style, tough-but-approachable combat, and the under-appreciated boss rush format, pulls its weight and makes this game more memorable than I expected it to be, especially considering that this is the developer’s first major outing. It’s got a few flaws and could have used more pop in the sound department and level design, but that’s nothing that a true fan of any of its core elements couldn’t overlook.

Final Verdict:
GREAT
Eldest Souls unites the ideas behind the plethora of other pixel art action games with a challenging boss rush to mostly great effect.
A copy of this game was provided by Developer/Publisher/Distributor/PR Agency for review purposes. Click here to know more about our Reviews Policy.