Epic Mickey 2: The Power of Two now out, launch trailer inside

"Mickey Mouse is one of the most beloved characters of all time." 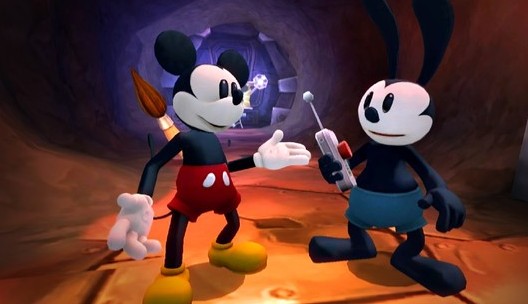 Disney has announced that Epic Mickey 2: The Power of Two is now available worldwide. The game put you in the shoes of Mickey Mouse for the first time ever, and is created by Warren Spector, who created wonderful games like Deus Ex and System Shock 2.

The Nintendo Wii U comes out on November 30 in the EU, and that’s when the game will be released for the system. We had interviewed Warren Spector and he had a lot of things to say to us regarding this game.

The game also features a co-op mechanic where Mickey and Oswald can join forces and use their respective powers for each others benefit.

“Mickey Mouse is one of the most beloved characters of all time,” said Warren Spector, vice president and creative director, Disney Interactive’s Junction Point.

“I feel incredibly lucky to have been given the opportunity to once again help craft his latest journey and at the same time bring Oswald the Lucky Rabbit back in such an amazing and innovative way, by allowing this once forgotten silent cartoon star to get a voice for the first time in history.”

“We continually strive to develop interactive content that resonates across Disney’s broad fan base,” said John Pleasants, co-president, Disney Interactive. “Our goal was to capture the nostalgic feeling that makes the Disney experience so magical, and it is clear that we’ve accomplished that with ‘Disney Epic Mickey 2: The Power of Two’ exceptionally well.”