Posted By Alex Jackson | On 04th, May. 2017 Under Article, Previews | Follow This Author @teh_jackson

Survival is hardly a new concept to PC gaming, with titles like Day Z and H1Z1 littering Steam like so many Zombie bits. Escape from Tarkov is in many ways reminiscent of that style of game, asking players to find their way out of danger while contending with the violence of opposing factions as well as unfriendly players trying to get their own leg up.

Set within the fictional Russian city of Tarkov, the now abandoned metropolis is a lawless wasteland where the strongest survive. The paper thin plot of your character being a PMC solder abandoned behind enemy lines is only there to provide context and doesn’t really make a huge difference. You’re in hostile territory, with next to nothing besides a handgun and a handful of magazines, and you need to make your way out. 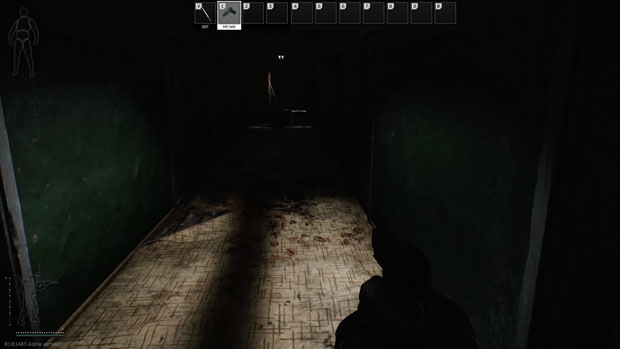 "The atmosphere of Escape from Tarkov is immediately striking."

Much like other games in the genre, your life is a precious thing that you’re going to lose again and again. You’re contending not only with the AI Scavengers around the map, but other players within the same location who have no issues with ending your life to make your stash of ammo their own. When you die, you lose anything you had on you save for your axe, and can only keep things you’ve scavenged safe within your personal stash if you can reach safety. The immediate danger constantly around you is only heightened by the presentation.

The atmosphere of Escape from Tarkov is immediately striking. You feel vulnerable right from the outset with so few methods to defend yourself and the idea that anything could be lurking just around the corner. The Alpha build always dropped me in during the middle of the night, which made it quite difficult to see any detail to most scenes but worked wonders for the gameplay, working in tandem with strong sound design and my imagination to keep me paranoid about what was lurking around me just out of sight. 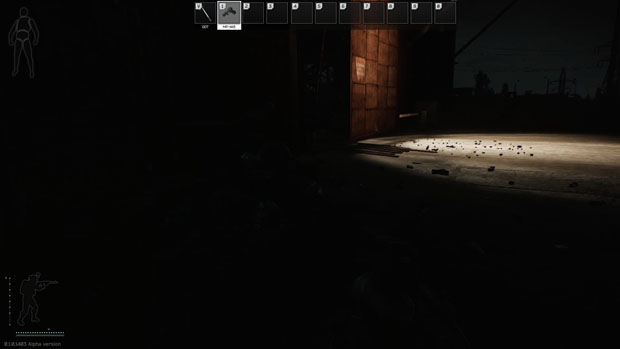 "The depth of the inky blackness provided by cover of night is a deliberate choice, but it can at times be a bit too much and I found myself easily losing track of where I was going."

The depth of the inky blackness provided by cover of night is a deliberate choice, but it can at times be a bit too much and I found myself easily losing track of where I was going. Flashlights and night vision goggles can be found within Escape from Tarkov, but are not included in basic kit and can easily be lost to another player. I found myself frequently wishing I had it as a basic option, which could have even added to the metagame, as using it could easily give away your position.

Tarkov gives players a ridiculous amount of control over your avatar to facilitate the stealth approach or frantic firefights. With a mouse wheel scroll and a few keystrokes you can manipulate factors like how much you’re crouching or how fast you’re moving to a granular degree. The flexibility to peek out just enough to fire off a shot and get back behind cover fast, or move slowly enough to minimize the noise of moving is important to the flow of the game and surviving the trip through Tarkov. 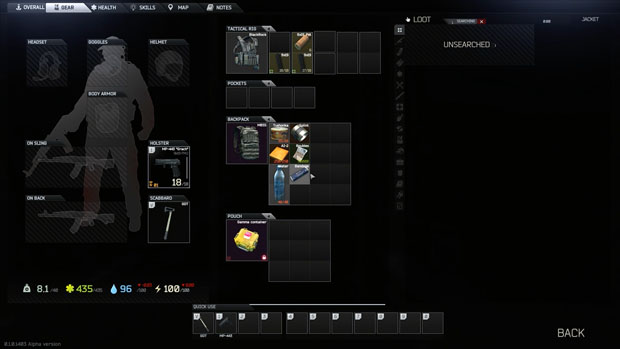 "Escape from Tarkov sets itself apart from others in the genre is a rather smart inventory system."

The three maps available within the alpha have nicely realized layouts and plenty of places to scrounge for supplies. With an area of roughly 10-15 square kilometres each, there’s a lot of ground to cover for each map. If you see a building in the distance, odds are that you can try to enter it. Exploration of course comes with its own dangers- perhaps the entrance is locked and trying to breach it would give away your position, or perhaps you might find others inside who wouldn’t be so friendly. If you come across a point that seems like it could be dangerous to cross such as a bridge without much cover and streetlights to take away the cover of night, you might try to find a different way around.

One of the places Escape from Tarkov sets itself apart from others in the genre is a rather smart inventory system. On one half, you get a glimpse of all the ways you can gear up. Headsets, goggles, body armour, tactical rig, holsters and others allow you to customize how much you can bring in and how protected from attack you are if you can claw your way into having these things. Containers you’re in the process of looting appear on the right side of the screen and can simply be dragged into a place they’ll fit on the left similarly to a classic Resident Evil inventory, keeping things intuitive and snappy to get you back in the action.

Escape from Tarkov is shaping up to be just as deep and engaging to fans as the best the genre has had to offer yet. Strong map design works with great atmosphere to give that fantastic tense feeling, and a well design inventory system keeps you engaged in the action. If you have some comrades who enjoy this kind of game, it should be a good time once the final version hits Steam.