It’s a messy situation all around. 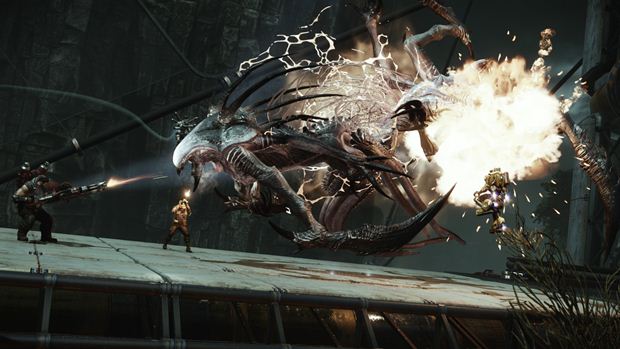 Although there is a lot of hype and anticipation for Turtle Rock and 2K’s upcoming asymmetric multiplayer shooter, Evolve, recent developments have led to some controversy and uproar with the fans; predictably, these developments have all to do with DLC, specifically pre-launch DLC that has been spread across a multitude of retailers as exclusive pre-order bonuses, meaning that it is physically impossible for a fan to actually get access to the ‘full’ game upon launch- depending on where you shop, you will be locked out of something or the other.

That’s not all either, as it appears as though certain hunters and monsters are being sold separately- basically, it sounds like Turtle Rock are taking a leaf out of Ubisoft or EA’s book here, something that fans are accusing them of doing in those very words.

Turtle Rock’s co-founder, Phill Robb, took to the thread on the forums where these objections are being raised to defend Turtle Rock’s position:

“If we thought we could have finished all those monsters and hunters for ship we would have put them in the box … Hunters and monsters are a pretty big undertaking, they cost a lot of money and time to make. We’re hoping that once people see how much new hunters and monsters bring to the game that they’ll feel like they got their money’s worth.

“Our number one rule for DLC is never split the community. Never. So we worked it out so that any DLC maps are free, any new game modes are free. Then, recognizing that not everyone wants to buy DLC, we made sure that even if you didn’t purchase any of the paid content, you could still play with people who did!

“So if I buy a new monster or hunter, and you don’t, we can still play together. You may not want to buy it, but your original purchase of the game will be enhanced by it anyway because you can still get into games with people who wanted to buy them. Hell, you can even set the DLC characters and monsters up as opponents in solo games.”

He also addressed the question of the DLC exclusives-

“We then have to trust our publisher to make the best decision on how to sell that game,” Robb said. “We’ve done everything we could to keep this stuff as open to choice as possible and despite how it may look to some, there isn’t anything here that forces people to spend more money than they are comfortable with. We feel like all of the Evolve bundles that 2K announced just offer people choices, and having choices isn’t a bad thing.”

Honestly, it sounds like, on their part, they are doing the best they can, and a lot of these bad decisions are coming from the publisher, and not them. It’s a sticky situation, but it is also reflective of the market as it stands today. I can only hope that the game is strong enough to stand on its own, because it sounds like Turtle Rock made a great product, one that might be getting unnecessarily mired in controversy due to 2K’s decisions.