F.I.S.T.: Forged in Shadow Torch Review – Striking Through the Opposition

This 2D platformer packs a punch.

F.I.S.T.: Forged in Shadow Torch by Ti Games and Bilibili takes the 2D side-scrolling formula and runs with mechanical flair in both its atmosphere and gameplay. Aside from some visual blemishes and initially restricted flow and structure, F.I.S.T. accomplishes its goal accompanied by the cool factor of playing as a rabbit bashing robots with a giant arm.

F.I.S.T. tells a story about a rabbit named Rayton who when an old friend gets arrested and taken to prison and he goes to rescue him, punching a multitude of robots led by the Legions of Iron Dogs along the way. Right out the gate, the title takes the anthropomorphic route in terms of its character design but it works surprisingly well. It never seemed too overdone and felt very natural or appealing to the setting. The story expands at a good pace and was very enjoyable throughout due in part to Ray himself. I was able to sample both the English and Chinese voicework and both casts do a fine job of selling the world of F.I.S.T., even if their character traits are familiar affairs. Still, having an English voice option for F.I.S.T. is surprising to me, since there are a lot of voiced NPC conversations and this is an independent game developed by a Chinese studio. Localization feats for a smaller game like this deserve recognition.

"Aside from some visual blemishes and initially restricted flow and structure, F.I.S.T. accomplishes its goal accompanied by the cool factor of playing as a rabbit bashing robots with a giant arm."

The art style of F.I.S.T. is very inspired for the approach it goes for. “Dieselpunk ” as it’s referred to is realized in the environmental design and the background detail is very sharp on the PlayStation 5. The nighttime scenery in the outdoor areas like the starting city shift very well with the camera adding a great deal of depth. The main city hub in particular looks great along with its China inspired scenery. F.I.S.T.’s world is very grimy and industrial, and the soundtrack composed by Caisong Bo compliments this nicely. The OST blends jazz and piano tunes for the main city hub with quieter sounds to set the moon while exploring the various zones. Sometimes a great score sets out to compliment the gameplay, instead of overtake it; and that is the case here.

F.I.S.T. runs at a smooth 60 fps at a native 4K on the PlayStation 5, and keeps the framerate with dynamic resolution scaling on the PS4 Pro. This is great because the two versions are very comparable in this respect. 1080p at 30 frames a second on the base PS4 console still can work modestly well but when the platforming gets hairy, 60 fps might seem vital. A Performance Mode on PS4 to knock the resolution down to achieve a higher framerate would be useful.

One trapping F.I.S.T.: Forged in Shadow Torch falls into in its visual presentation is the use of motion blur and camera shake. The game uses both camera and per-object motion blur, taking away a significant amount of sharpness from the picture in both gameplay and cutscenes. Being a game made in Unreal Engine, this is likely a limitation of the software as opposed to an artistic choice; at least in regards to camera blur. The options menu offers no customization for the visuals other than the camera angle of finishers, so it comes down to personal preference. I usually almost always turn off camera blur but in a 2D side scroller such as F.I.S.T., it’s less of an issue than in a 3D game. Every time Ray attacks, the camera shakes a little or a lot and unfortunately this cannot be turned off either. While most of the cutscenes in the game are with static models with limited animation, the dynamic cutscenes are when the animators really flexes their muscles. Characters have great choreography in these sequences, and they really highlight what motion blur can add to the table when animating characters. 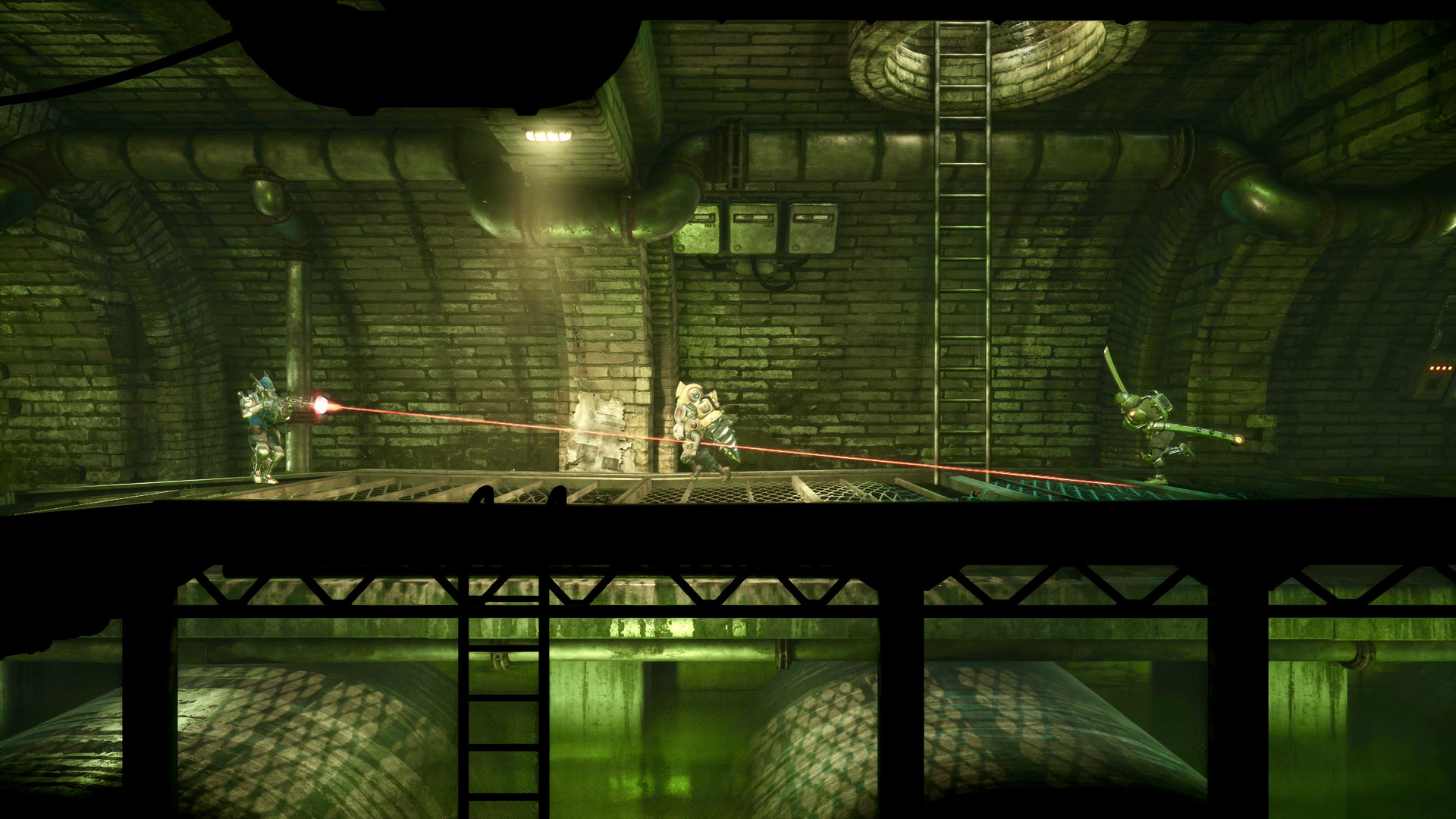 "The interconnected map is incredibly large."

The combat starts off pretty stale and clunky. Weapons have light and heavy attacks that can be chained together, but there isn’t much room for experimentation. The skill tree for each weapon is built around adding combos instead of boots to attack or health. Players are specifically shown what they can and cannot do. It’s only when later abilities and combo extenders are gained where things really get going. However, most of the later skills for each weapon do require Data Disks, which can be obtained from boss fights, exploration or purchased for a hefty sum. SP moves are stronger attacks that use a resource bar refilled by attacking foes. I think that these are best used as strong combo enders and can make combat more manageable. Some of the boss fights can be very taxing, and this is because of how enemy staggering is handled. When Ray staggers or does not stagger a foe is very inconsistent and can lead to taking unnecessary hits or deaths when committing to combos. To that end, SP abilities do not grant invincibility either but have a better chance to stagger. There are two more weapons obtained in the story, but Ray’s first tool in his arsenal is the most fun and versatile to use; but the second weapon he obtains, a drill, does allow him to glide and traverse underwater which is a great boost to moving around the world.

The interconnected map is incredibly large. Each named zone such as the Sewers, Tower, or otherwise are color coded on the map to help differentiate them from the world view. Tracking later objectives or previous unclaimed secrets can be a pain but mission goals are easily seen with a small text box or a red exclamation icon on screen. One other minor note about viewing the map is that you can’t cycle through or pin specific icons for collectibles and goals. What this comes down to is a map that does the job at letting you know what’s around you and where you can go, but heavy backtracking might require a little more time to relearn where certain doors or barriers were that hide secrets.

Traversal offers a steadier form of progression and in a game like this, it is always welcome and this part of the game delivers on the fun factor the most. F.I.S.T. knows when it’s the right time to introduce a new movement option after you get accustomed to a previous ability. Rayton will find transformers throughout the world, giving him movement upgrades. Like with combat, traversing the world can be stiff but it becomes fast and fluid past the early parts of the game. One small but extremely appreciated aspect of the platforming challenge that really helps its pace is that hugging walls does give you an extra dash. This gives the player fluid movement through the levels which are largely boxed rooms and hallways filled with enemies and traps. 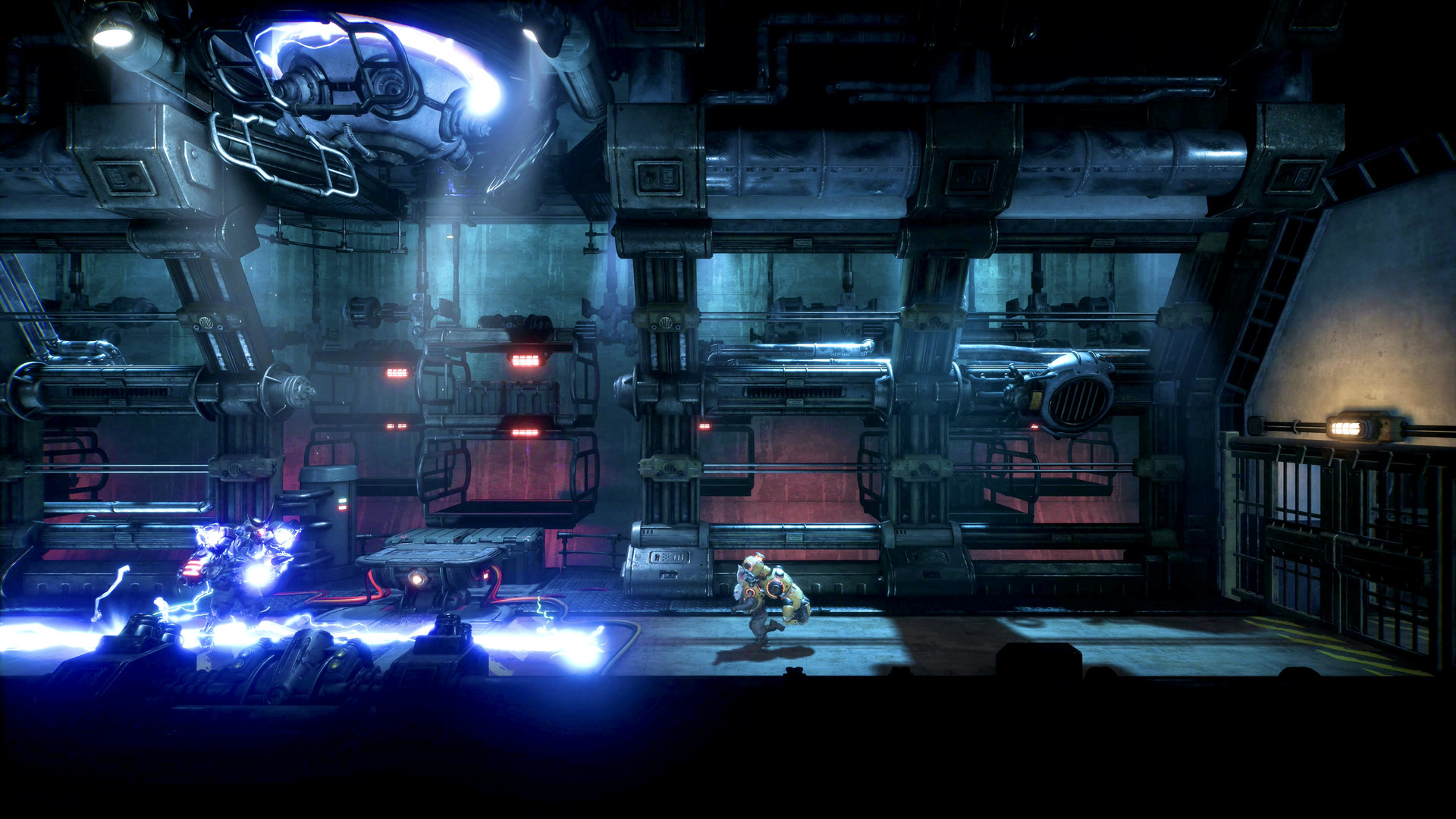 "F.I.S.T.: Forged in Shadow Torch is worth keeping an eye on."

It’s when F.I.S.T. combines combat with intense platforming challenges that starts to bring a level of frustration. Depending on the combination of enemies and room hazards, moving forward may take several tries. Early on, there’s a skill that makes executions give EP back. EP is a resource used for gadgets and one of them is a flask that heals Rayton. I recommend getting this ability in the skill tree as soon as possible as it can help keep you going through tougher areas as long as enemies are able to be executed along the way. Some foes do have weapons that can stun or stick you in place, and certain hazards like poisonous fluid in the sewers make this a really lethal and vexing combination.

F.I.S.T.: Forged in Shadow Torch is worth keeping an eye on. It brings some unique flavor to the platformer genre with its story and world building but lacks some map functionality. After some time gaining the exploration and combat tools available, platforming is very responsive and fluid to play even though combat doesn’t reach the same heights. Ever still, punching robots with a large metal fist is very satisfying to do.

Final Verdict:
GOOD
Aside from rigid combat and some visual hiccups, F.I.S.T.: Forged in Shadow Torch delivers a unique world with an intriguing narrative and tight traversal.
A copy of this game was provided by Developer/Publisher/Distributor/PR Agency for review purposes. Click here to know more about our Reviews Policy.