Is it worth it?

Described by Mad Catz as “Beats of the geek generation”, the Cyborg F.R.E.Q.5 gaming headsets are designed to accompany the futuristic-looking R.A.T. mouse range. They’re angular in appearance, slightly bulkier than the aforementioned Beats headphones, and almost robotic looking. As is the trend nowadays, they’re also available in a range of colours including red, white and black to suit various tastes.

Negotiate the typically sturdy Mad Catz packaging and prise these babies out of the cardboard and their moulded plastic sheath and you’re immediately struck by the build quality. Rugged plastic and lightweight metal components combine to make this worthy of its fairly hefty price tag (£129.99 in the UK, $149.99 in the US). Inside the box nestle the phones themselves, cabling, detachable microphone and an extremely minimal sheet of instructions. To be fair, you really don’t need much guidance to get these up and running – plug them into your PC and they’re automatically installed. You may initially have to enter the sound settings menu to make these the default audio device but after that, you’re ready to go. 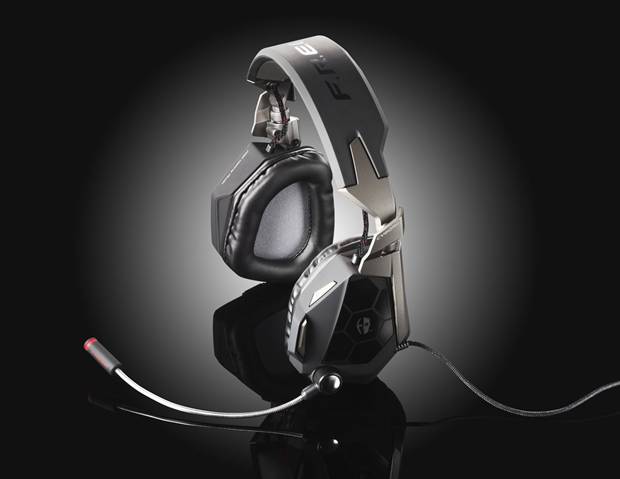 Slipping these onto your head is a pleasure. No matter the size of your cranium, the adjustable band means you can tweak them to fit comfortably – made easier thanks to a measure on each side so you can always get the correct setting. When not in use Mad Catz has employed the rather cool rotating earcup facility, which allows the headphones to nestle comfortably around your neck.

The cups fit snugly over the ears and prove incredibly comfortable even after long periods. External sound is barely audible. A rubberised strip along the length of the headband proves comfortable and stops slippage – while the weight of the ensemble is minimal and barely noticeable. Thankfully, we didn’t suffer sweaty ear syndrome after a good gaming session either.

With a frequency response of -20Hz–20KHz, the large 50mm drivers and Neodymium Magnets ensure thumping bass and great tone for crisp, clean audio. You’ll honestly hear your songs, films and games differently. Playing games with these on your head is a fantastic experience, picking up sounds and intricate detail that would previously have passed you by.

Although you’ll probably be buying these to connect to your PC and Mac via USB, the rather cool thing is that a quick-release connector means the USB can can be detached and switched for the included 3.5mm audio cable. This means that when not gaming it also works wonderfully with MP3 players, tablets and smartphones such as the Apple iPhone, Blackberry, and HTC handsets. You can even use the microphone for voice calls with some phones, which is a nice touch. The braided cable in its USB form is a healthy 2m long, and this reduces to a far more manageable 1m with the 3.5mm attachment. Perfect when you’re on the move; there’s nothing worse than having un-necessary and unwieldy cabling flopping about.

We tested the F.R.E.Q.5  with all manner of movies, music and games and found its performance to be fantastic. This is a powerful beast and with the volume cranked up, you’ll be blown away. From intricate sounds to full on thumping beats, the sounds are as good as, if not better than, other PC headsets I’ve tried in the past. From explosions and speech, to gentle footsteps and gunfire, it’s very capable.

On-ear controls make adjustments easy during use. There are three equaliser settings – accessed via a button on the left ear cup – that make a noticeable difference. By switching between Gaming, Music and Chat, you can adjust your experience to suit. The right headcup also harbours the volume control, which proves far handier than having to fiddle about with a toggle on a cable. 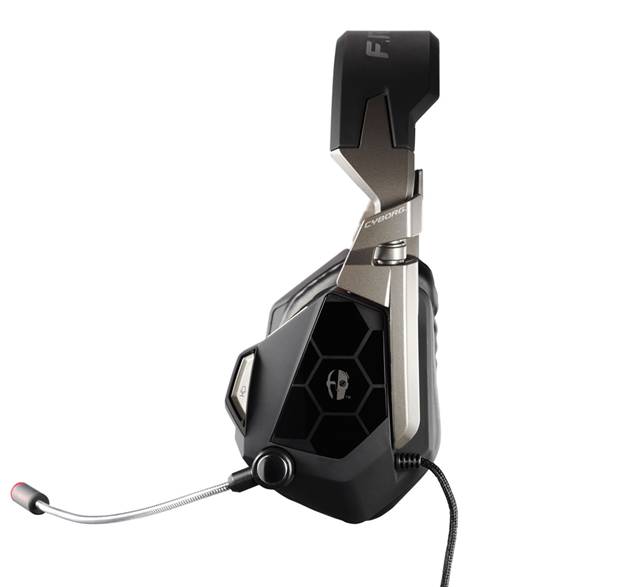 A small removable – and discreet – stud on the left cup conceals the connector for the detachable noise-cancelling microphone, which can be clicked in and locked when required. The highly bendable appendage can be contorted into all manner of positions and provides crystal clear speech to whoever you’re playing. A mute button is handily positioned on the headset too, with a red LED on the tip of the microphone meaning you’ll always know if you can be heard by others. It’s a nice design, although I do wonder how long it will be before I lose that stud… a spare included in the box would have been nice.

The fact the microphone can be removed when not chatting is a great move by Mad Catz and converts it to a more conventional-looking set of headphones, making you look far less daft wandering around the streets using them to listen to music.

If you’ve got some cash to spend and are looking for a superior PC gaming headset, then you can’t go far wrong with the F.R.E.Q.5. Stylish – especially the gloss black version – light and comfortable, they boast excellent performance and are rugged enough to withstand even the most strenuous of gaming sessions.

They look great, feel light and comfy and provide booming beats. Can be used on PC/Mac and also with portable devices and phones

A little on the pricey side. Not particularly streamlined and a little more bulky than rival headsets. Its aesthetic won’t be to everyone’s taste

A copy of this game was provided by developer/publisher for review purposes. Click here to know more about our Reviews Policy.
Tagged With: F.R.E.Q.5, F.R.E.Q.5 Headset Review, mad catz