F1 fanatics will probably enjoy this but it largely feels similar to the 2013 edition.

Posted By Shubhankar Parijat | On 26th, Jan. 2015 Under Article, Reviews

F1 2013 was a pretty good game. Better than most people expected it to be, in fact. However, the one problem with it was that those of us who aren’t familiar with the sport itself and don’t follow it too avidly ended up not enjoying it as much. That’s kind of a given, considering that it was, after all, an F1 game, but still, it’s not a very wide market in the video game industry.

F1 2014 doesn’t fix many of 2013’s problems, least of all the one we just talked about. But that’s not a bad thing- F1 2014 takes the best of its predecessor and builds on that, but also ends up taking a few missteps in its attempt to streamline its experience for potential players. 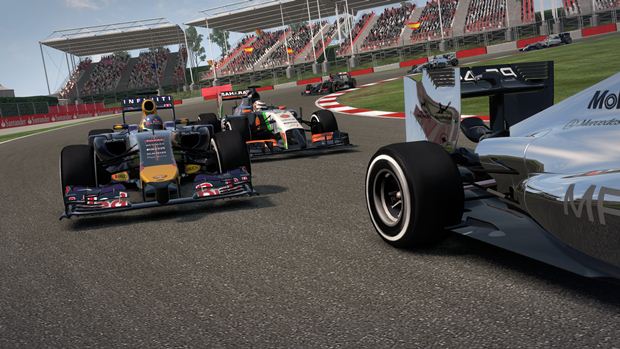 "The PS3 and the Xbox 360 are ancient consoles, and no one expects those systems to be able to match the visual prowess of the games that will fully take advantage of the Xbox One and the PS4, but F1 2014 has managed to utilize the two old systems’ technical potential rather well."

The first thing that you notice when you start playing F1 2014 – and the thing you notice even more minute by minute as you play more of it – is that it is a stunning game. The PS3 and the Xbox 360 are ancient consoles, and no one expects those systems to be able to match the visual prowess of the games that will fully take advantage of the Xbox One and the PS4, but F1 2014 has managed to utilize the two old systems’ technical potential rather well.

F1 2014 looks beautiful- the environments, the racetracks, the cars, all look stunning. The visual effects as a car veers off-track, the tiny little details as you start noticing the damage on the body of your car and as the wheels of your vehicle start to wear away. There are a few instances when the visuals don’t hold up as well- the side mirrors of all vehicles, for examples, are a travesty- but overall, the game looks beautiful all around. Participate in just one race on a soaked racetrack while it is raining and you’ll see what I mean.

The visuals are not the only thing that is authentic about F1 2014 though. The races are as real and as challenging as you would expect of a game that bears the name of the F1 motorsport. Nothing is more satisfying that a perfect turn around a corner, with the exception of successfully overtaking a rival, or nicking a race just as you are about to finish the home stretch, or even something as simple as a perfect gear shift. 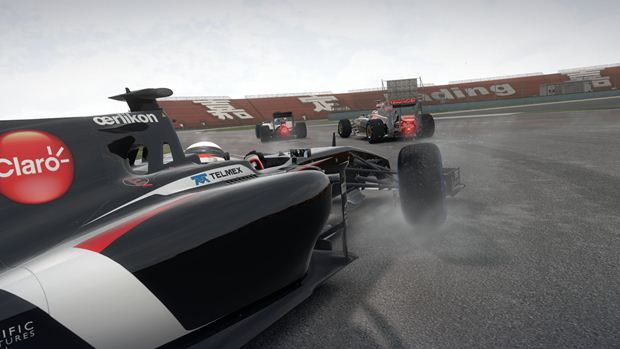 "However, the one major change that is there is not a very good one- the Classic mode has been removed, and that comes as a bit of a shock."

The racing feels just right in F1 2014. And all the while, you have to be careful about your car. You have to make sure that it hasn’t taken too much damage, or that the wheels and the tires are in a perfect condition, or that you aren’t running out of fuel, and taking all of this into consideration, you have to time your pit stops perfectly.

Sometimes, however, the game can be stubbornly difficult, almost frustratingly so. The controls aren’t always as responsive as you would want them to be, and when you’re punished for making a miniscule mistake, and that mistake results in you losing a race, it can be very frustrating. It may have been done by the developers to add to the feeling of authenticity, but it ends up making the game maddening at times.

There’s another thing that disappointed me in F1 2014- there’s a general lack of content here. First of all, other than a few new cars and some minor tweaks to the visuals and the mechanics, the game isn’t all that different from 2013’s installment. However, the one major change that is there is not a very good one- the Classic mode has been removed, and that comes as a bit of a shock. Sure, the Career mode and the Scenarios mode are as good as ever, if not better, but it just feels the game is a little lacking in terms of content.

If you’re an F1 fan, there’s a very good chance that you’ll end up buying (and liking) this game for its authenticity. If nothing else, just for the new cars. While the lack of new content will disappoint you, you will ultimately find that F1 2014 is a very enjoyable game, albeit with a few undeniable flaws.

Not very different from F1 2013; No more Classic mode; Can be frustratingly tough at times.

F1 2014 is a very enjoyable game, however it falls short of being better than “good” due to too many similarities with the previous year’s entry and lack of content.

A copy of this game was provided by developer/publisher for review purposes. Click here to know more about our Reviews Policy.
Tagged With: codemasters, f1 2014, pc, ps3, xbox 360