F1 2016 Interview: ‘We Set Out To Create The Most Comprehensive Formula One Title To Date’

Lee Mather, Principle Games Designer at Codemasters gives us the low down on F1 2016.

F1 2016 is the eight entry in the long running racing franchise developed by Codemasters and this time around the developers are upping the ante with a ton of new features and modes. GamingBolt recently chatted with Lee Mather, Principle Games Designer at Codemasters in order to know more about the new features and improvements.

F1 2016 promises a “massive step forward for the franchise.” What was the thought process going into development, especially with the level of competition these days?

We knew we had a really strong starting point with F1 2015, then from there we wanted to expand on the features in the game. The focus for this game is to give the player the full F1 experience in Career taking inspiration from the sport wherever possible. The vision for the new Career mode was to take it beyond anything we had previously achieved and to make the player feel really connected to the game and always motivated to want to keep playing.Beyond that we wanted to include key elements of the sport and community requested features.

What were the biggest criticisms facing previous F1 games? How does F1 2016 improve on this to attract both old and new racers?

We paid a lot of attention to the feedback we got from our community while developing F1 2016. Their main request was for a Career mode, then Safety Car and Formation lap were also heavily requested. So we set out to give the fans the features they really cared about. The overall presentation and structure of the Career will attract both new and old fans, plus to help the less hardcore F1 fan we’ve also added some tutorials to explain the nuances and intricacies of the sport. 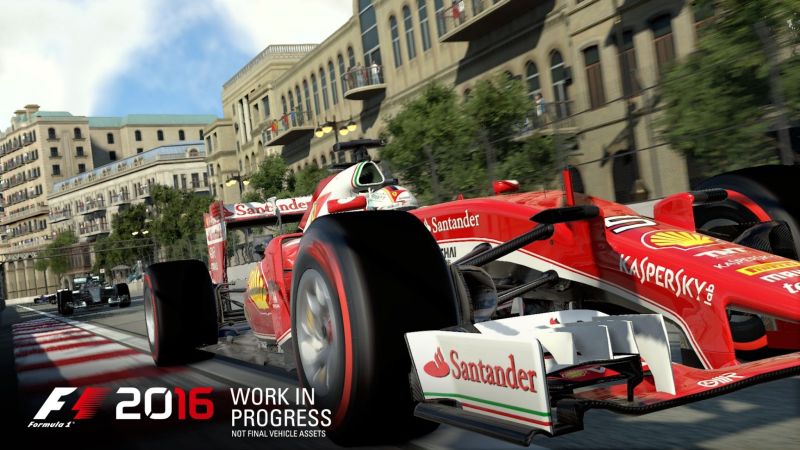 "Ultimately it’s the players on track performance, development of the car and results in their driver rivalries which affect player standing within the teams."

Career mode will allow players to create their own avatar, earn contracts, choose teams and whatnot. Can you offer some examples as to some common scenarios they’ll face?

We wanted to give the player total team freedom at the start of the game.Because of this the player will face different challenges depending on the team they select, and also based on how they want to progress their Career. Driving for a top team will require the player to immediately start winning races and scoring big points.Over achieving for a top team is tough, and the team will also require the player to keep developing and progressing the car. If the player starts to slip they will be at risk of losing their drive with the team. Alternatively, if the player starts with a lower performing team the goals will be more realistic; earn a point, make it in to Qualifying 2, upgrade the car etc. however, the player may want to move team, in which case meeting the teams’ goals will help attract contract offers from other teams. It’s entirely up to the player which path they take to becoming a World Champion, but they will be challenged accordingly no matter which path they choose to take when starting their 10-year Career.

How much will one’s decisions affect their overall progress? Is there a general conclusion to arrive at or will players keep going to maintain their status?

Ultimately it’s the players on track performance, development of the car and results in their driver rivalries which affect player standing within the teams. Working hard and hitting the goals the team set could see you becoming the 1st driver. Achieving 1st driver status sees the player gaining more upgrade points to allow them to have an edge over their team-mate. Repeated failure to meet goals will result in the player being ejected from the team.

How long will it take players to complete the ten seasons of Career Mode?

That very much depends on the length of the sessions and level of investment the player wants to put in to each session. At the extreme end of the scale the player could participate in 3 full length practice sessions, all 3 qualifying sessions and a full distance race. Over 10 seasons that’s a huge amount of gameplay.For those who want a more condensed experience there’s the option to skip some of the practice sessions, run One Shot Qualifying an as short as a 5 lap race. We want to allow the player to scale the experience to suit the time they have available to them to play F1. 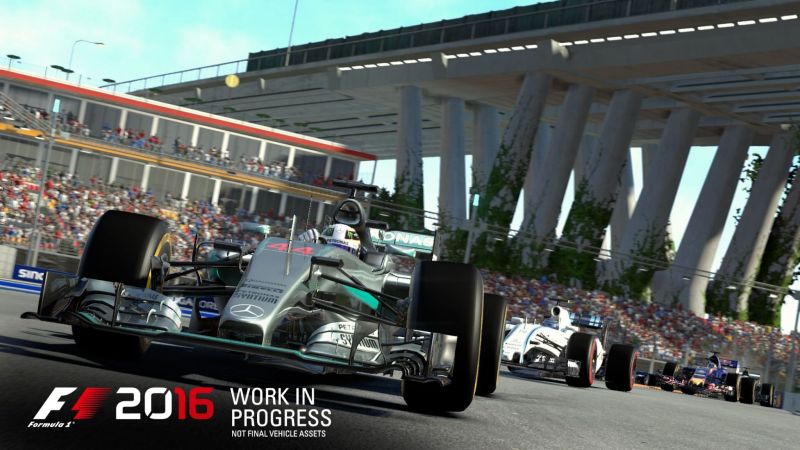 "The safety car was actually the second most requested feature by our community for F1 2016.We knew we wanted to include it in the game, as we feel representing the sport accurately is very important in a licensed title."

How many tracks, drivers and settings can players look forward to?

With F1 2016 being the official game of the 2016 season, players can look forward to 21 circuits, including the stunning new Baku track and the return of a fan favorite ofHockenheim. We also have the entire grid of 22 drivers, plus the addition of the new American Haas team who have entered the sport this season.

Are there any other modes that will offer challenges to players?

In the sport of Formula One, practice sessions are incredibly important to the teams.We wanted to take inspiration from what the teams do during practice and then create some new cool features around them for the game. When playing Career in F1 2016 the player will be presented with three practice programs which will allow them to learn the circuit, gauge what sort of qualifying pace we can expect, which allows us to set realistic goals and also learn how tire wear functions. Taking part in the tire wear test allows us to create a bespoke pit stop strategy for the player based around how they drive the car and wear the tires specifically for that day’s weather conditions.

What can you tell us about the re-introduction of Safety Car along with Virtual Safety Car?

The safety car was actually the second most requested feature by our community for F1 2016.We knew we wanted to include it in the game, as we feel representing the sport accurately is very important in a licensed title. We also wanted to include it as it brings the excitement of the restart when the safety car returns to the pit lane. It generates a sense of tension and really mixes up the race, often affecting where drivers finish the race. The Virtual Safety Car is a new initiative in Formula One and one something we knew would work well in the game. We’ve marked the tracks up accordingly and have the notification boards around the circuit. As in the real sport, the Virtual Safety Car neutralizes the race, with each driver not being permitted to gain time. In the game, the driver must race to a delta time to avoid being penalized.

Can you tell us about the online modes and how they’ve been improved for F1 2016?

There are two significant improvements to the online portion of the game this year. The first is an increase in the maximum number of permitted human players. Previously the maximum we allowed was 16. In F1 2016 you can now fill the grid with 22 human players.

To complement the fact that players can now run 22 player faces in this way, we’ve added in a Saveable Championship feature. This allows participants to save a copy of the lobby list, which then retains the drivers and constructors’ points as well as players/teams selected etc. Another thing which the feature covers is being able to substitute a player. Should someone not be able to make it online to take part in a league race, the host can substitute them for another player who is online during any race, and then add them back later. 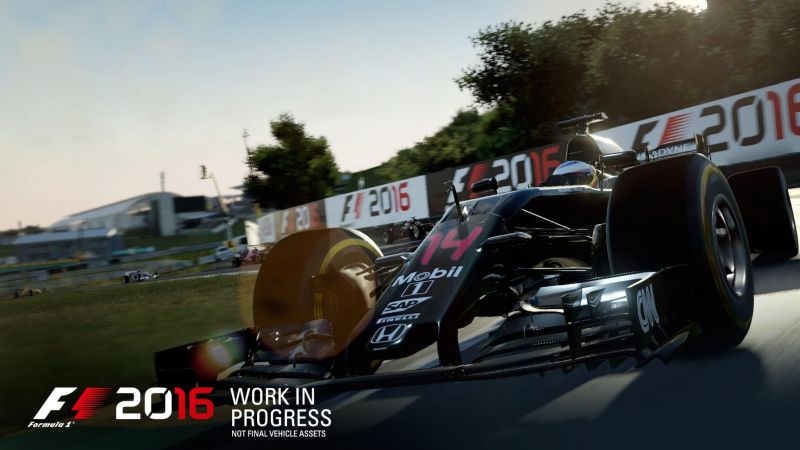 "We reward the player for multiple things while out on track, including clean laps, sector times, correct DRS usage etc., but the main tests are part of the Practice Programs."

A rich car upgrade system along with a “deep practice development programme which mirrors the tests carried out by the teams in real life” has been promised. How will this prepare players for the more difficult races in the game?

With the player now having the ability to work on upgrading their car, taking one of the slower teams to the top, we wanted to give the player interesting and also educational tests to take part in with which we can feed the system and allow the player to collect upgrade points.

We reward the player for multiple things while out on track, including clean laps, sector times, correct DRS usage etc., but the main tests are part of the Practice Programs. The three practice programs are designed to not only fill practice with some cool gameplay, but also to help educate the player on how to drive the car and on intricacies of the sport of Formula One. The first test is a track acclimatization test where the player is challenged to drive through gates with the correct line and speed. This helps to teach them how to race a circuit correctly, but also generates points for them to spend on upgrading the car. Another test is a hot lap which allows us to understand the level of performance the player can achieve in Qualifying. Again there is a target which we expect the player to hit, or even exceed for extra points. The final test is a tire wear test. We challenge the player to keep the tires within a range of wear while still maintaining a good race pace. This test helps with consistency and also highlights to the player areas of the circuit where they’re doing additional wear to their tires.

These elements along with Qualifying, Race positions and the rivalry battle which takes place all feed in to the Career and upgrade system.

In F1 2016 we set out to create the most comprehensive Formula One title to date. We discussed the features with our community much earlier in the development cycle and we believe we’ve created the game which not only we wanted to make, but also the game with the fans craved and truly deserved. Thank you to anyone who has purchased any of our F1 games in the past, and we sincerely hope you have as much fun playing F1 2016 as we did making it.