F1 Manager is a nice collection of elements that most manager sim fans would want, but rarely feels like more than the sum of those parts.

Despite not having a definitive annual franchise like the proper F1 series of racing games, the genre of racing management sims has been a thing for a while with a few sporadic releases over the last couple of decades. Demand has clearly outpaced supply though, as the modding communities around the few racing management games that do exist have been pretty busy trying to satisfy this niche. F1 Manager 2022 is an officially licensed F1 Management game though, and from what I can tell, it’s got a pretty good handle on what makes a competent management simulator despite rarely feeling like more than a sum of those parts.

Once you select which of the ten teams you’ll be starting with, it’s off the races as it were. Choosing your pit crew, engineering team, scouters and more are all done one-by-one from a list of free agents, and doing your best to get the most promising talent is a little overwhelming at first with so many choices, but once you get your arms around the general stats you see for them, it really just comes down to what you want to put emphasis on. There is rarely a wrong answer. Plus different types of training facilities can also be used to compensate for most shortcomings.

"Selecting drivers and staff isn’t as fun as it could have been, as it’s missing a lot of the depth offered by the talent acquisition mechanics in other games’ team management modes."

Selecting drivers and staff isn’t as fun as it could have been, as it’s missing a lot of the depth offered by the talent acquisition mechanics in other games’ team management modes. Here, the list of drivers can be altered through poaching and some basic recruiting, but I never felt like choosing one candidate over another had much of a long-term impact once I got them into the pipeline of training them and getting them ready to take over for the old guard. It’s fine for what it is, but more depth here could have made this part of the process more impactful.

Still, this part integrates some nice RPG elements into the gameplay by developing each member of your team more and more as you do better in the races and accomplishing different tasks assigned by the board. Same more-or-less goes for the facilities you train in. There’s not much there when it comes to designing them or customizing them but you can upgrade them on an individual basis. Improving your wind tunnel or suspension simulator generally increases the amount of experience they offer in their respective areas and that can give you lots of incentive to focus on them early on. Also they degrade over time, so you’ll occasionally have to refurbish them if you don’t regularly upgrade them.

Races can be completely simulated if you wish, with the practice, qualifiers, and races themselves all being executed automatically with results that are seemingly based on how well or poorly you managed your preparation leading up to the race. I never quite felt satisfied with the outcome of these simulations personally, as I felt I generally did a good job with preparing and training, but with the sheer number of moving parts that are likely factored into the algorithm here I very well might be missing something. Cracking the code on this to get simulated races to turn out exactly how I want is likely something I’m probably not supposed to be able to do though, and would make the game less fun anyway. 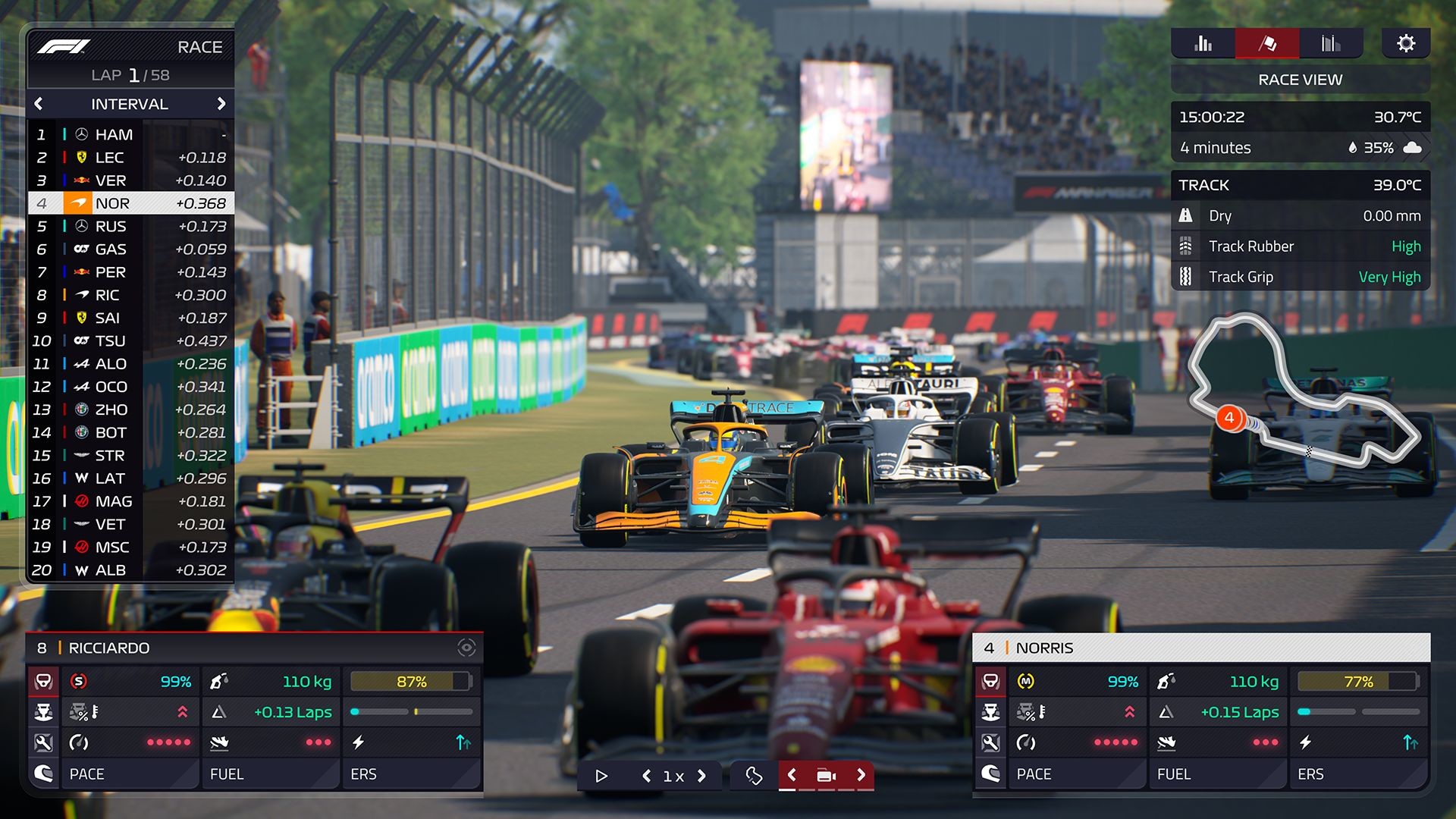 "Learning how to adapt dynamically to events as they unfold and even prepare for them beforehand is where the most compelling experience lies."

For those that do want a bit more control, you can affect the racer’s strategy in real-time with driver commands, scheduling pit stops, and just generally balancing out the pros and cons with being more defensive or aggressive in any given situation, which is the name of the game here. Changing conditions related to weather, surface conditions, and even changes to the leagues regulations can happen so mastering the ins and outs of how the game plays is really just the beginning. Learning how to adapt dynamically to events as they unfold and even prepare for them beforehand is where the most compelling experience lies.

Tweaking your set up is something you’ll be doing a lot, and it’s about as intuitive as it probably could be while still including the amount of variables it does. Adjusting your front wing angle, rear wing angle, anti-roll distribution, tire camber and toe out is just scratching the surface when you factor in all of the different types of parts that also affect the ultimate results. For instance the softness of the tire can be matched or mismatched with the surface conditions to varying effects. Again, it’s not as deep as some management modes of other racing sims in this regard, but it’s enough to make you feel like you have a lot of control, and that’s the point I suppose.

Some finely-tuned visual effects and soft lighting can make F1 Manager 2022’s presentation appear stellar at times. For a game with such a focus on UI and menus, the character models look pretty good. Well, for main racers anyway. Seeing them standing in a showroom by themselves you’d think we’ve finally come upon a racing game with good looking human models, but the minute you see them talking to a crew member, you’ll see more of the dead-eyed low-detail NPC stuff that we’ve come to expect, which is a shame. Significant or not, seeing these models look so dated does quite a number on the immersion factor of the game. The UI on the other hand is similar to what you would see in other modern racing sims, and it’s reasonably laid out consistently throughout the game. Common UI language cues like using the triggers and shoulder buttons to scoot around to different menus and arrow keys to shift around within them make enough sense, and you can usually get around pretty easily despite some of the animations associated with them not being perfectly smooth, sifting around into different areas is a fairly breezy process. 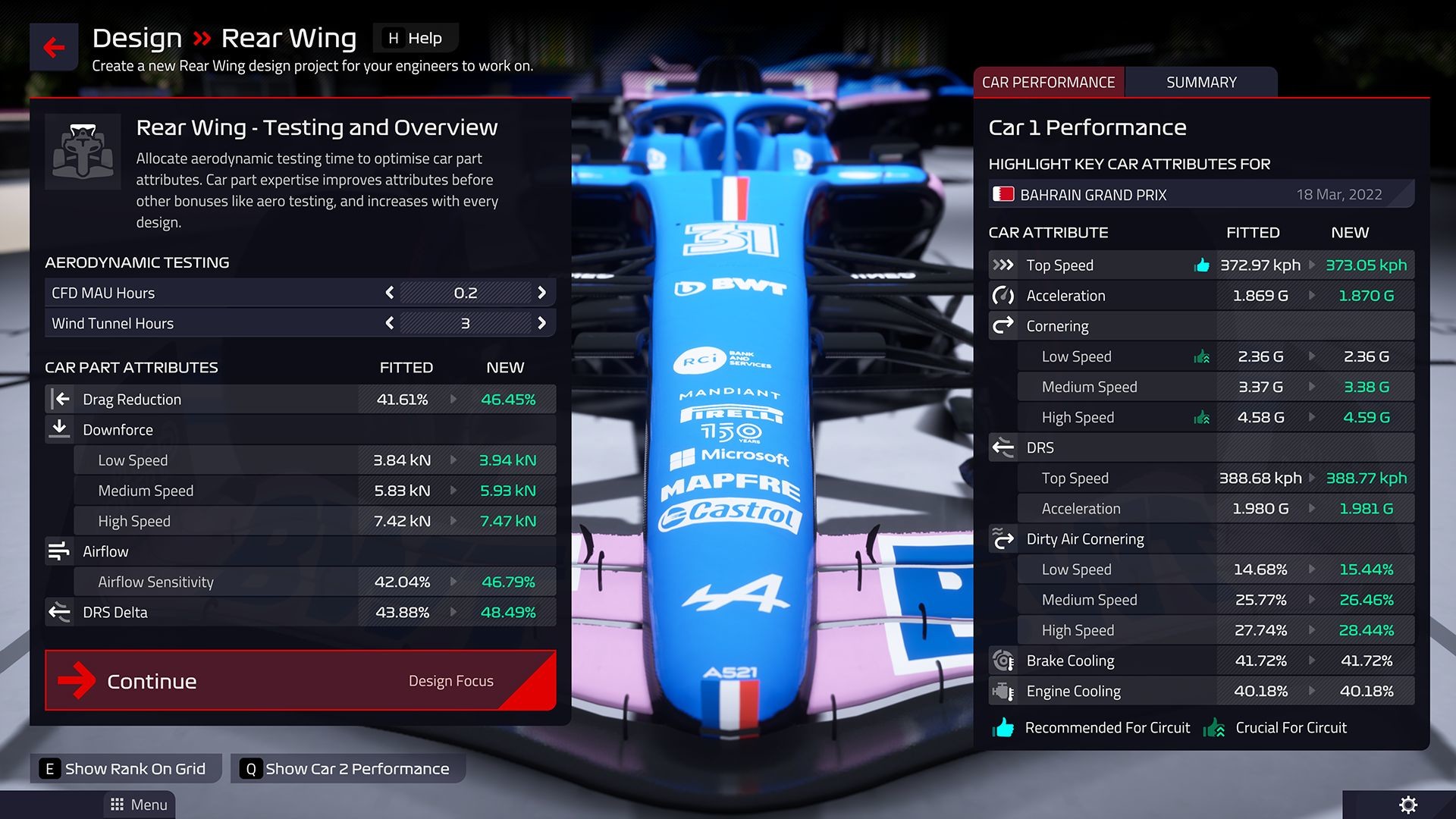 "Unprecedentedly deep or extremely addicting it is not, but F1 Manager 2022 does serviceably take care of the audience it seems primarily aimed at, while hopefully laying the foundation for a steady stream of new and improved sequels to follow."

F1 Manager 2022 brings a lot of key elements that have emerged in previous iterations of the genre as well as manager modes from other – more recent – simulation sports games. While a lot of its ideas are borrowed from one or the other, it integrates them pretty well for the most part and sprinkles in a few neat touches like managing team confidence with accomplishing tasks and approving budget requests. It doesn’t do any one thing outstandingly well, but also never really fails to feel like a fully-featured simulation manager game. If an officially licensed F1 game totally focused on preparing, executing, and learning from data collected after F1 races is an itch you’ve been wanting to scratch for a while, then this will probably take care of that for you to some extent. Unprecedentedly deep or extremely addicting it is not, but it does serviceably take care of the audience it seems primarily aimed at, while hopefully laying the foundation for a steady stream of new and improved sequels to follow.

Fairly bland presentation; Depth could be better in several areas.

Final Verdict:
GOOD
F1 Manager 22 does a decent job learning from other management simulations but only rarely feels like a step forward for the genre.
A copy of this game was provided by Developer/Publisher/Distributor/PR Agency for review purposes. Click here to know more about our Reviews Policy.