Fallen Legion: Sins of An Empire Review – The Pauper Princess

Fallen Legion reaches towards the sun, managing to return with only some singed wings.

Game genres can be a tricky thing in 2017, because so many games are becoming so intertwined and inbred that they don’t really fit into a single little box. Thankfully chocolate and peanut butter combinations like the tactical MOBA of Atlas Reactor or the Rougelike shooting of STRAFE come up a lot more often than those that really don’t work. But to finally find the point, Fallen Legion: Sins of an Empire is a game that breaks all my notions of genre into pieces.

Fallen Legion is an RPG. It’s also a beat em up, and an action game, and a kingdom manager, and has heavy elements of strategy as well as a rhythm element to its combat. A game with this many hats might sound entirely overwhelming just to read it like that, but in practice the gameplay is kept remarkably simple, satisfying and compelling by feeding back on those more action oriented elements.

It’s unfortunate that everything outside of that gameplay loop feels under serviced by virtue of receiving less focus than it should have. The story of Cecile Octavia doesn’t so much begin as it drops you in the middle of what feels like an ongoing narrative that needed time to flesh out. First you’re a young princess on the run from pursuing forces, then you’re informed that your father, the Emperor is dead, making you the acting Emperor and to quell political unrest you need to get back to the capital. Then you’re introduced to the Grimoire, a talking book with ghoulish need to consume human souls to somehow help hold the kingdom together. 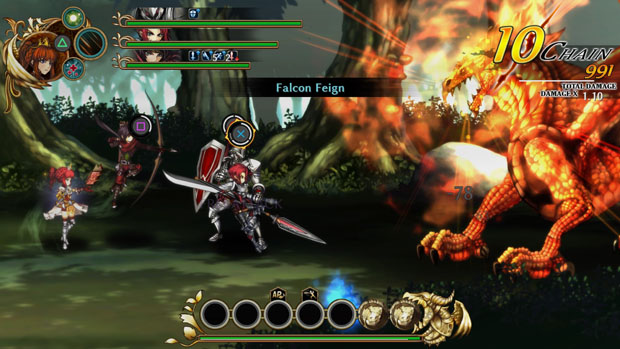 "The pacing of the plot is all over the place and feels nearly like reading a “choose your own adventure” book out of order."

The pacing of the plot is all over the place and feels nearly like reading a “choose your own adventure” book out of order. Grimoire and his abilities to allow Cecile to summon figments of warriors to wield legendary weapons and make up her party, but these figments appear within the first level before the book is ever introduced. Motivations and goals flit almost battle to battle and the game never really takes the time to stop and communicate what’s happening.

Married to the schizophrenic story is a wholly uneven presentation that undercuts the kind of budget the game was working with. Visually at its best the game can look like the moving paintings that Vanillaware is known for such as Odin Sphere. However at its worst, the story segments can’t even match Fire Emblem Echoes, with static portraits lacking any voice acting or emotion when there really should be. Certain plot critical scenes also get the short end of the stick while meaningless inner monologue from Cecile get the grand treatment. 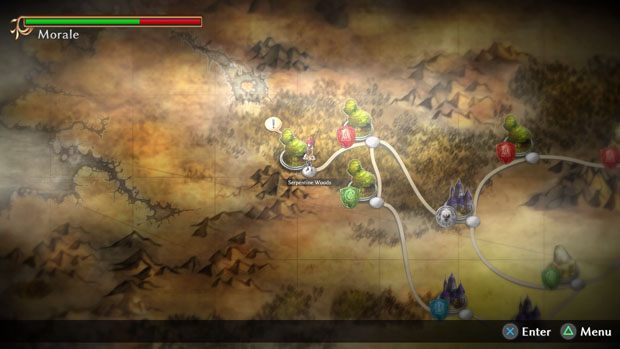 "The result is an almost rhythmic call and response flow to the combat that kept me engaged, especially in the tense one on one boss fights."

While stumbling in presentation, Fallen Legion really pulls out the stops with its unique battle system. Cecile and her three party members always remain attached to whatever specific face button you’ve attached them to before the battle. As opposed to navigating menus and choosing attacks and spells, a simple tap will cue up one of those party members to move on a combo bar, which can itself be influenced with new death blow attacks and effects by equips to Cecile herself.

You can move any party member at any moment, assuming they have a command point to use. Knowing the effects of your deathblows and how to take full advantage of the abilities of your party becomes quickly evident. The real time nature of the battle system introduces action game elements such as the almost necessary perfect guard, which when pulled off will automatically restore command points to allow you to press your attack. The block has a very short wind up and cannot cancel attack animations, necessitating some degree of forethought about when to move and when to hang back. The result is an almost rhythmic call and response flow to the combat that kept me engaged, especially in the tense one on one boss fights. 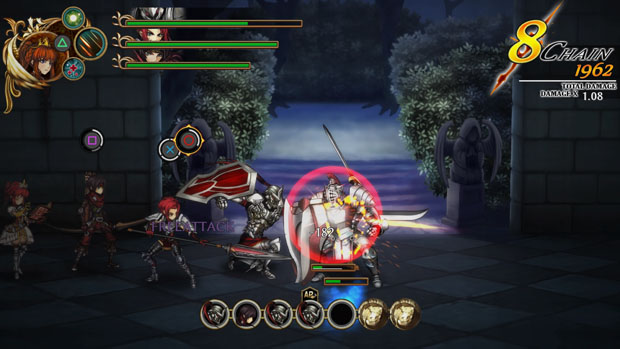 "Budget was obviously the restraint in all the big ideas Fallen Legion: Sins of the Empire had to offer,"

Between the battles, one of the less well integrated but still unique systems is managing decisions for the kingdom. A situation and three paths will pop up with both an immediate effect for the chapter such as a buff or item, and a less obvious impact on the kingdom. The former is less pronounced than it should be, giving the immediate effects more leverage over your decisions than the larger kingdom, though you’ll unlock different side missions based on your choices.

Budget was obviously the restraint in all the big ideas Fallen Legion: Sins of the Empire had to offer, and it’s clear by the aimless narrative and presentation glitches that this could easily become a flawed prototype to something much more polished later on if this game takes off. Between wanting to roll with some fresh ideas but not being able to pull it off or limiting your focus to your restraints, well, I can safely say I’m glad enough that Fallen Legion decided to reach for the stars.

A unique battle system that feels good to play coupled with a great art style create an engaging gameplay loop, leveraging action game sensibilities and strategy elements to deliver something both visually and intrinsically interesting to play.

Some really strange presentational choices hamper the story experience and show how limited the game probably was. Battles can occasionally get messy and hard to follow.

Fallen Legion: Sins of an Empire shows more ambition than it probably had any financial right to show, and it pays off in some really surprising ways. If you want to try something unique in the RPG space, this is certainly reaching for something beyond its grasp but comes out great anyway.

A copy of this game was provided by developer/publisher for review purposes. Click here to know more about our Reviews Policy.
Tagged With: action, Fallen Legion, ps4, RPG, Sins of an Empire, Yummyyummytummy