Bethesda Softworks’ Fallout 4 is a game somewhat at odds with its overall fan-base, delivering a strong open world with plenty of things to do while facing the slings and arrows of an uneventful story and not enough content. Which is fair enough given the hype surrounding the game and what was ultimately delivered, but that conflict also meant a whole lot wasn’t expected from Automatron, the first paid DLC for the shooter. You try telling your audience that a Season Pass will be raised in price and delivering more content while promising the same concept that a user-created mod provided for free. Despite those compunctions, Fallout 4‘s Automatron DLC succeeds not just because of its gameplay, prompting us to revisit the Commonwealth again, but also due to its new mechanics that suck up hours of crafting time.

"VATS will help you decide the best strategies for effectively fighting the robots and the variety in combat, that too with the addition of the new lightning chaining rifle, is a nice change of pace."

Once your version of the Sole Survivor hits level 15, you’ll receive a mysterious signal of sorts. Follow this signal and you’ll discover the robot Ada under attack by a robotic horde. Wipe out said foes, take Ada as a companion and you’re off to fight the mysterious Mechanist and halt his robot army in the process. What’s the Mechanist’s problem though? What are his motivations? What’s up with all the robots?

Well, the robots are the stars is what’s up. Right away, Automatron impresses with the attention to detail of its robots. With their own unique appearances, weaknesses and weapons, the robots provide a strong challenge that’s equal parts rewarding and frustrating. It’s a fairly different experience from the Synth war, especially since these mechanical monsters range from your “average” foot soldiers to hulking monsters armed to the teeth. You won’t be completely overwhelmed if your level is high enough but it isn’t exactly a cake walk at higher difficulties either. VATS will help you decide the best strategies for effectively fighting the robots and the variety in combat, that too with the addition of the new lightning chaining rifle, is a nice change of pace.

That variety in robot design also carries over to Automatron‘s main hook – the ability to create and customize your own robots. Along with modifying Ada, Jezebel and even Codsworth, you can take to creating completely new robots using aluminum. The options on hand are quite diverse – you can decide on the overall size of the robot, its movement options, weapons, head design and various special mods to turn it into a mechanized reaper of a companion. The ability to choose between different voices adds that extra bit of personality to each creation.

"The lore in Automatron is exceptionally compelling, providing context to the robots’ creation and their ultimately sad state of affairs."

Of course, the problem is you’ll need a certain set of perks in order to really customize your robot. Said perks include Robotics Expert, Science and Armorer and while it’s not the biggest issue when you’re level 15 to 20, veteran players who dabbled in special builds that don’t feature those perks will be stuck. They either have to create brand new characters or commit to grinding out enemies and quests in order to level the necessary perks.

Whichever way you go about it, there’s no denying a certain amount of gating for attempting what’s meant to be your next major time sink. At least those robots you destroy and salvage will provide enough resources when it comes to crafting your own creations. Especially when the overall content is a little light. We didn’t expect Automatron to bring tons of new quests to the table and honestly, the new dungeons – a new bandit stronghold owned by the Rust Devils and the Mechanist’s HQ – are lots of fun.

The Mechanist’s home turf is especially large and presents tons of traps and robots to battle. Even if the main story isn’t outstanding, learning the Mechanist’s motivations and bonding with Ada provide their own moments of solid story development. The lore in Automatron is exceptionally compelling, providing context to the robots’ creation and their ultimately sad state of affairs. Long story short – and without any spoilers – there’s more than enough reason to sympathize with the Mechanist. 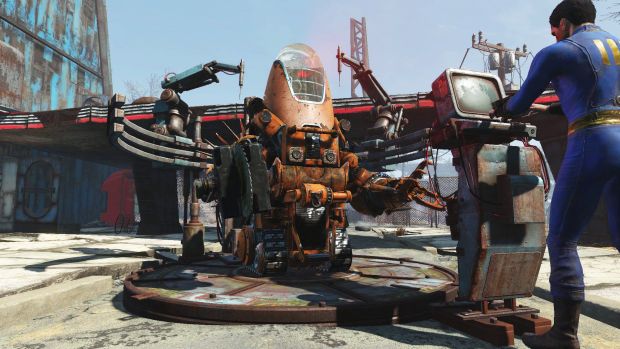 "If you need any excuse to get back into Fallout 4 or just want to walk around with a huge robot watching your back, engaging in fun skirmishes with other robots, then Automatron is worth a look."

That being said, even if you run around, exploring everything new the DLC has to offer, you’re still looking at some 3 or 4 hours of fresh content. Of course, as with every Bethesda release, Automatron has its share of bugs and issues. While one didn’t encounter any game-breaking glitches, it was fascinating to see robots get stuck on environments due to their overall size and stature. This could be chalked up to the difference in movement options but it just felt weird at times, especially when factoring the sometimes-wonky nature of companion AI.

Make no mistake though – this DLC is meant to provide a few new twists and mechanics to tide fans over rather than a stop-gap, time-sink. Despite featuring more content than we expected, Automatron is just a fun set of tools to play around with, changing the base game and its world in unexpected ways while presenting a limited set of dungeons to challenge you. It’s an excellent diversion but by no means a full expansion (which May’s Far Harbor promises to deliver).

If you need any excuse to get back into Fallout 4 or just want to walk around with a huge robot watching your back, engaging in fun skirmishes with other robots, then Automatron is worth a look. As a DLC, it promises just the right amount and delivers such without setting our collective world on fire or outright justifying its $10 asking price.

Not a whole lot of story content to delve into. Robot crafting somewhat gated depending on player perks. Bugs and other issues. Difficulty can oscillate strangely at times.

Fallout 4's Automatron DLC is a neat little diversion rather than the start of something epic. Its story missions are limited but its robot customization is strong, even with the usual bugs and hurdles.

A copy of this game was provided by developer/publisher for review purposes. Click here to know more about our Reviews Policy.
Tagged With: Automatron, bethesda softworks, DLC, Fallout 4, pc, ps4, Xbox One