The pic seems convincing, but no further content was offered.

Just weeks away from Fallout 4’s official release, a rather big leak from inside the game has apparently hit the web. We’ve had other information about the inner workings of the game go public this week already, such as what kind of trophies can be earned when playing the game using the PS4 at least. Now a video streamer who calls themself “vileself” has claimed a friend of his got his hands on the game early.

According to Gameranx, the streamer offered up proof of this by posting a screenshot of the main menu for the game. What he doesn’t make clear is whether this is the PC, or console version, or whether that really matters because all of the game’s menus will be the same no matter the platform. This person also didn’t divulge just how his friend was able to get the game weeks before it’s release. By all accounts, it doesn’t appear as though review copies of Fallout 4 have gone out to media yet.

Those who saw the post understandably wanted vileself to post some videos of the gameplay but he only replied with “cant” when he was asked to do so. The cynical among us would say that’s because this picture is a very elaborate ruse, but the real reason appears to be that he believes posting that much of the game would put his friend’s reputation or perhaps even job, in jeopardy. In a few more week’s we’ll get to see if this was indeed the genuine article. Fallout 4 is due to land on the PS4, Xbox One and PC on November 10, 2015. 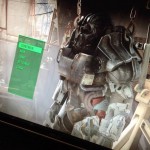