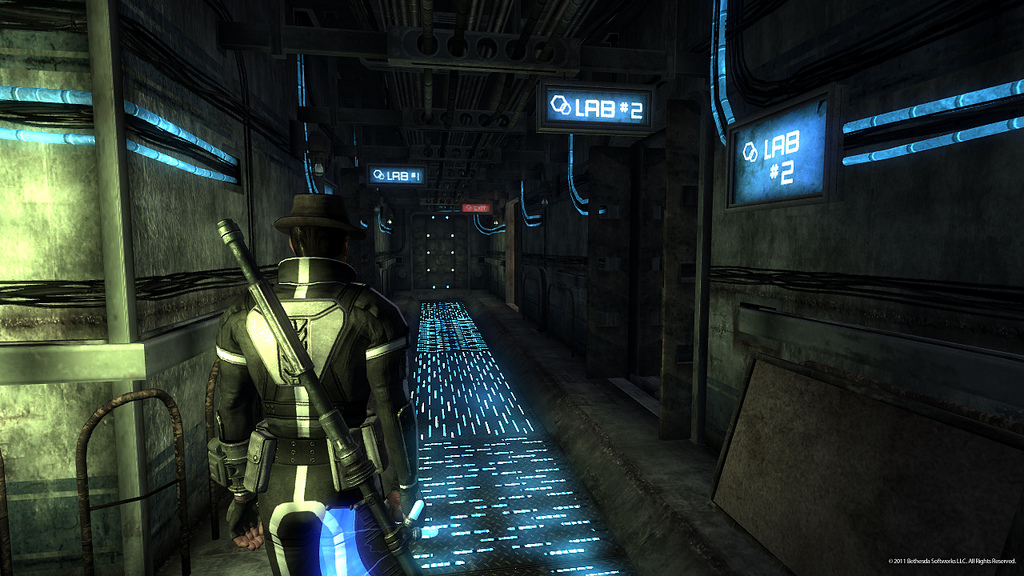 That suit talks to you …freaky.

As I loaded up Fallout: New Vegas, I received a strange radio signal on my pip-boy, essentially inviting me to a midnight showing of a feature film of some sorts that had the reminiscence of a drive in movie theater.  The projector was an old broken down United States of America Satellite clearly marked.  A few enemies were waiting for me there but I had no problem taking them out.  In the broadcast it said to arrive early and i guess I arrived a little too early.  I sat there waiting and waiting, drank a redbull, waited some more, drank a beer, waited, started to get frustrated and then finally it was midnight in Fallout: New Vegas time.  By this time the projector lit up the screen wilth a strange and very non-entertaining eyeball.  After the unsatisfactory of the thrilling eyeball on screen, thinking I would see a film or something I went to tinker inside the projector.  Then all of a sudden a huge beam of light flashed before me, almost blinding me and the story of ‘Old World Blues’ began.

I won’t give any spoilers away but let’s just say after that I was transported to another place.  Not an alien world kind of place, a more humorously, previously unknown place.  And while the Fallout series has always had its smart remarks, I truly believe this content to be one of the humorous pieces of content I have ever played in the world of Fallout.  This DLC also brings you back to the real roots of exploration, which is a large part of what Fallout is.  New groovy apparel, new weapons as well as useless coffee mugs (well useless to some) are all apart of the latest addition in the Fallout: New Vegas series. You will come across new enemies and new, well I’m not really sure what I would call them… interestingly, odd beings?  I don’t know.. that is the best I have got with out giving away any spoilers.  Just to add this one thing that people may remember going to a 1950’s black and white world as a child in the first game being forced to do bad things in a neighborhood.  We found it for real and it’s not so pretty. 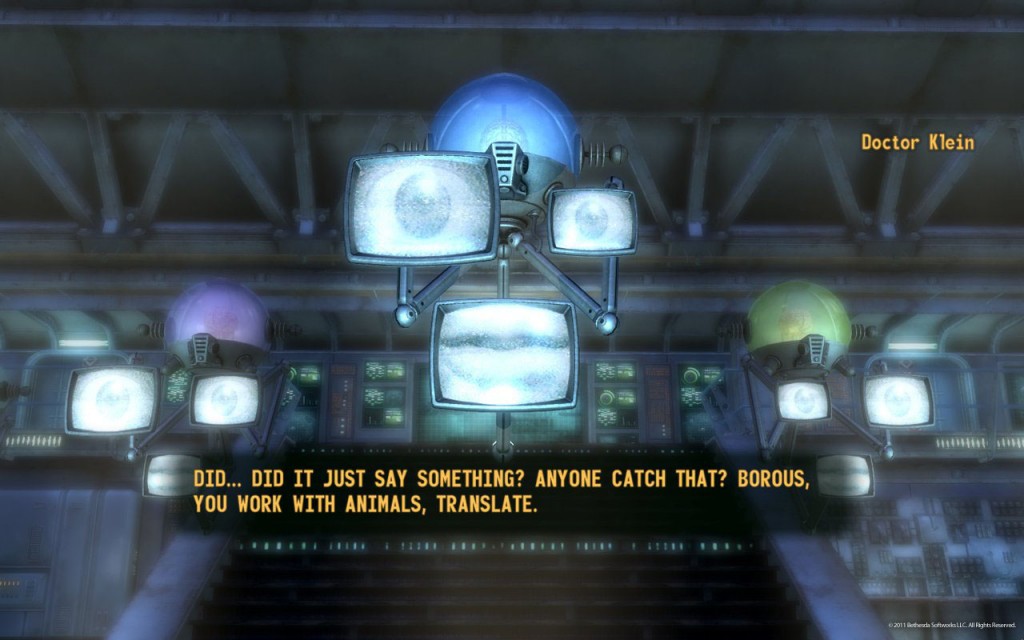 To smart to be dumb.

Once again the level cap has been risen by five levels which really makes it more worth it at you try to max out your skills.  You’ll travel across this previously unknown place, completing mission and you don’t even need things like your brain, spine or heart.  You actually get perks for running around with out them!  I’ll stop there on that subject for people that really want to be surprised.  The whole area here is unique and scientific looking as some of the weapons show some true technological advancements whether it comes to a plasma gun or a lead chucking machine.  You will come across force fields, robot scorpions and of course the main inhabitants who were able to sustain them selves during the fallout, just certainly not in the way you would expect.  The inhabitants are trapped in fear of a Dr. Mobius, one of the same ..race I suppose you could say but the real fun in this third DLC installment is the interactions you have with these things, they are hilarious and they don’t even know it.

Other than that you pretty much do what you usually do in Fallout, with its typical missions.  Of course there is the suit that talks to you and room full of appliances that all have their own personalities.  They all talk as well and the light are in an eternal quarrel, so I would stay clear of them.  All of these appliances though, even the very angry talking toaster, have special things they can do but all require you to go on a scavenger hunt to find their missing parts in order to do them.  The juke-box can equip one of your  new weapons with specific emitters and the auto-doc can even give you permanent implants that give you bonuses.  But it all comes down to the end when you realize your own brain is much smarter than you think it is. One down side of the content is it is rare to come by a stim-pack and parts can become very difficult, so you will have to rely on food as well as drinks to keep your health up.  You can definitely approach situations in different ways, now more than ever considering you skills should be rather high by now and I suppose there could be altered endings but I think it was meant all in all to end happily ever after.  In the end the moral is, well I’m not sure what the moral was, but this DLC was extremely funny and you can return at any time… as long as you don’t lose your transporter.

The beginning and end are very dialogue heavy.

Final Verdict:
SUPERB
Travel to a previously unknown scientifically advanced placed where you learn what has not advanced.
A copy of this game was provided by Developer/Publisher/Distributor/PR Agency for review purposes. Click here to know more about our Reviews Policy.