Posted By George Reith | On 02nd, May. 2011 Under Reviews | Follow This Author @GNReith

As a rule, I just plain dislike pet simulators. They usually aim for a kind of realism that boarders on annoying. No one likes picking up dog turd, so why would I want to do it in a game? Thankfully Fantastic Pets goes further into the realms of imagination, letting you put wings on dogs and raise unicorns. Whilst this immediately carves it a niche in the pet sim world, it also falls foul of many standard problems within the genre.

The game attempts to shoe-horn in a mild plot and narrative to explain the whole pet raising thing. You visit your uncle, Dr. Menagerie, (get it, like a zoological garden?) who has a massive house full of weird ass animals that you need to look after while he’s away doing some kind of excavation work. So you get to choose a pet and look after it. Not exactly a compelling narrative, but that’s not what we’re here for. 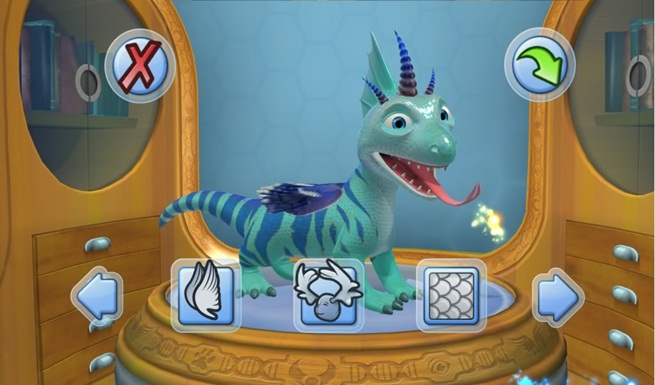 There are many ways to customise your pets, but the menu navigation can be fiddly

The choice of pets is fairly decent with dogs, cats, horses and lizards offering a solid variety. You can also customise nearly all aspects of your pet, even going into the more whimsical. I chose a cat with wings, not at all thinking about how annoying that could actually be. From there you are guided through a needlessly long tutorial by your uncle’s AI Natalie. This is where a major problem lies. The game is quite clearly aimed at a younger audience, but the sheer amount of hand holding that occurs is a constant frustration. Yet, there are also many times when things aren’t explained well enough, with new events in the game’s talent shows giving you no instructions whatsoever.

Having chosen your pet, you are taken to the main home screen. It projects the images of you in your room onto the screen, where your pet frolics around in real time. In this respect it is an accomplished stab at augmented reality gaming, but there is little to it outside of the initial spectacle. You can interact with your pet by making various gestures on screen that it will respond to. There’s a wide variety of ways to interact with your pet but, aside from looking cute and cuddly, these don’t really offer much else. You can also collect various gems as you interact with your pet that let you unlock various features in the game. 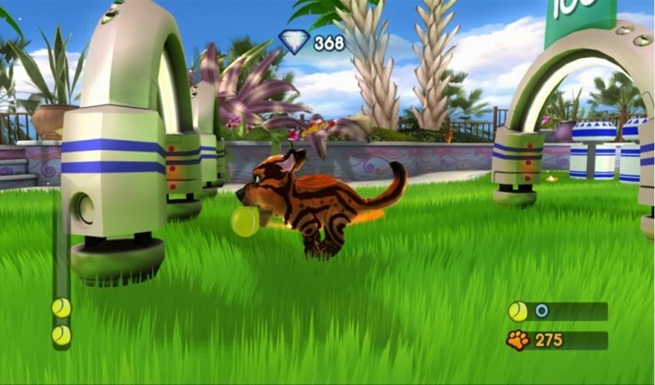 The mini-games are a good stab at AR gaming, but dodgy motion detection lets some of them down

The main unlocks are a variety of mini-games. Some involve your pet while others seem less relevant, and many of the games can be played with a second player as well. They range from dodging bubbles, racing your pet, to throwing balls through hoops. Most of the games work well and offer a nice spread of different activities, but the motion detection accuracy is mixed. The ball throwing games seemed to suffer especially, with no way to let the game know when you want to release the ball in your hand. The step up from these unlockable practice games are the talent shows where you compete for medals based on your score. These offer a decent structure and challenge, but you can only compete in one per real time day. This is a staple of many pet sims, and it’s an odd and frustrating tradition. Why limit content like this?

As you collect gems from these games you can also unlock more parts for your pets. You can then change these features as you see fit. Want some horns on your dog? Go for it. Scales? Chuck ’em on. There’s a lot of scope for enjoyment just tinkering with the way your pet looks, and it’s interesting that the features you apply can also alter your animal’s behaviour patterns. The only issue that plagues this section of the game is the menus. The Kinect sensor is an intriguing piece of kit, but it is frustrating using it to navigate menus even at the best of times. This is further aggravated by the fact that most of the icons depicting certain pet features don’t offer a sufficient enough preview of what the part will look like, meaning you just have to keep scrolling through all of them one by one until you find what you want. Though the customisation elements are enjoyable enough, the menu heavy parts selection can be extremely tedious. 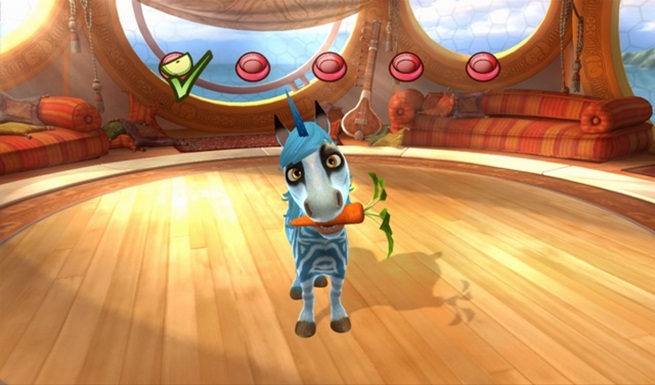 The visuals are pretty good, and set up some adorable moments

The main problem with Fantastic Pets is the lack of structured gameplay. Aside from the talent shows, there’s not much else to aim for. In comparison to the adventures-based quest in last year’s Kinectimals, Fantastic Pets feels a lot less compelling. The only real thing keeping you going aside from cosmetic unlocks are the achievements, which do a good job of being in depth and varied.

At least Fantastic Pets does a good job with its presentation. The aural side of things is well covered by some fun tunes and the usually cute pet sound bites. The voice acting also isn’t too bad for a children’s title. The visuals deserve praise as well with some really decent fur effects and animations. It might not be all up to scratch with competing title Kinectimals, but it certainly has a colourful flair and charm of its own.

Fantastic Pets jumps the usual hurdle of needless realism seen in other competing pet simulators, but doesn’t quite nail the structure and compelling gameplay needed to truly rise above the competition. I’m sure there will be many younger children and families who will be rather taken with the charm and fun shenanigans of Fantastic Pets, but other demographics should seriously consider whether they will get full value for money out of a game like Fantastic Pets.

Some games feel loose and poorly tracked, Very patronising, Too much hand holding, At other times not clearly explained enough, Content is fairly limited, Menus are unintuitive

An enjoyable and imaginative enough pet sim that could've done with aiming for a broader audience, Fantastic Pets aims so hard for the family demographic that it often feels patronising and lacking in structure

A copy of this game was provided by developer/publisher for review purposes. Click here to know more about our Reviews Policy.
Tagged With: Fantastic Pets, Kinect, xbox 360