Head to head graphics comparison between the PS4 Pro, Xbox One X and PC versions of Far Cry New Dawn.

Another year and another Far Cry title. This is not a bad thing as New Dawn is yet another great entry in the long running open world shooter series. Far Cry New Dawn’s design is largely based on last year’s Far Cry 5, but it also adds its own flavor of bright and neon colors to an already engaging and emergent gameplay system. To begin with, the game continues the trend of using the Dunia engine to deliver some great looking vistas and render a massive map, which by the way is a modified version of the one we saw in Far Cry 5. New Dawn features the same post processing effect that we saw in its predecessor thereby giving the game a rather soft look. Regardless of the platform you will play the game on, Far Cry New Dawn makes some smart use of temporal anti-aliasing thereby resulting into a superb image quality. This results into a rendered image which basically has next to no jaggies.

Far Cry games have always excelled in rendering intricate details throughout its world map, and this trend continues in New Dawn. The lighting tech was already at the top of its game in Far Cry 5, and it’s great to see the solution in action all over again in New Dawn. Moving through locations with a rich, densely rendered foliage is a sight to behold at times. The texture work on trees is impeccable and seeing the sun rays getting scattered through the leaves is a pretty satisfying effect. This is all due to the complex material shaders in action; whether it be the surrounding architectures, the dense foliage or the pathways, Far Cry 5 delivers a high level of detail across all the three major platforms.

As far as cutscenes goes, Far Cry Dawn utilizes the same rendering tech that its predecessors utilized. The cutscenes are running in real time but they feature enhanced post processing and depth of field, thereby giving a cinematic look and feel. Alpha effects are decent, whereas more physics based effects like explosions look pretty amazing. Water effects are still a bit of a mixed bag; for example, water doesn’t splash when the player drives a vehicle over it. But overall, the water effects are not up to modern standards in Far Cry games and this is intriguing because this is the same company that developed the likes of Watch Dogs and Assassin’s Creed Odyssey which had spectacular water effects. However, volumetric effects like wind causing random dust displacement and smoke coming out of destroyed objects have all been implemented quite well.

So, overall, Far Cry New Dawn seems like natural continuation of Far Cry 5 in terms of terms of the technology involved. Now, let’s tackle the elephant in the room. How does the game perform on the PC, PS4 Pro and Xbox One X? As usual, we will take a look at the PC version. The developers recommend a Intel Core i7-4790 @ 3.6 GHz or AMD Ryzen 5 1600 @ 3.2 GHz, 8GB of memory and NVIDIA GeForce GTX 970 (4GB) or AMD Radeon R9 290X (4GB) or better. Our test build includes a GTX 1080Ti, 16GB of GDDR4 memory and Ryzen 1700 CPU. On the graphical options front, it’s great to see the developer continuing the vast array of options that we saw in Far Cry 5. These include the likes of Texture Filtering, Shadows, Geometry, Environment, Water, Terrain, Volumetric Fog, Anti-Aliasing, Motion Blur along with the ability to lock your frame rate, field of view and resolution scale. You can also enable adaptive resolution that will improve your performance but it will dynamically change the resolution so as to maintain the desired frame rate. The ability to lock frame rate option is an intriguing parameter but we are not sure whether it works as intended.

Furthermore, the UI does a great job of showcasing what each option does, the effect it can have on the visuals and the amount of GPU memory it needs. The game also comes packed with an in-game benchmark tool which will help you to gauge expected performance parameters based on the hardware you have. On the performance front, the game ran fine with every setting maxed out. There were no noticeable frame rate drops and the visual quality was always a class above its console counterparts.

Now, let’s take a look at the PS4 Pro and Xbox One X versions. As mentioned before, Far Cry New Dawn is largely based on Far Cry 5, so performance parameters are largely similar for both games. The Xbox One X once takes the lead with better resolution compared to the PS4 Pro which immediately gives it an advantage as far as image quality is concerned. The frame rate is capped at 30 frames per second for both platforms, and Far Cry New Dawn manages to stick at that target pretty consistently. 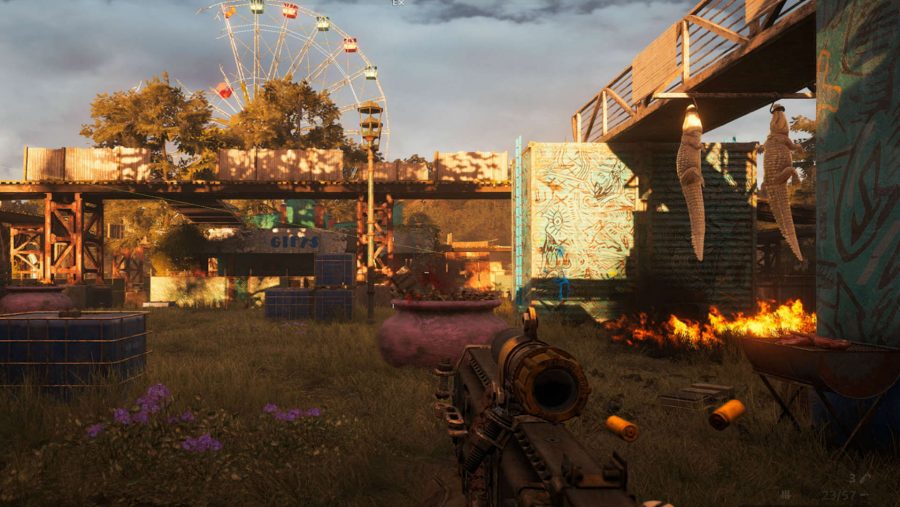 However, both console versions suffer from some inconsistencies. First up is the pop in issue for nearby objects; it’s quite distracting to see in-game objects like foliage pop up all of a sudden. Secondly, compared to the PC build, texture filtering on surfaces is pretty mediocre. You won’t notice this while you are traveling in a vehicle but its pretty apparent when compared side by side against the PC build.

In conclusion, Far Cry New Dawn successfully manages to retain all of the tech we saw in Far Cry 5 but It doesn’t necessarily build on anything noticeable. As far as the question of the best version is concerned, this is an easy pick for us. The PC version easily trumps PS4 Pro and Xbox One X due to its vast scalable options. Between the PS4 Pro and Xbox One X versions, Microsoft’s console once again takes the lead with better resolution and image quality. This is not to say that the PS4 Pro version is bad by any means. In the end, Far Cry Dawn is a commendable effort on all three leading platforms and a worthy entry in the long running series.