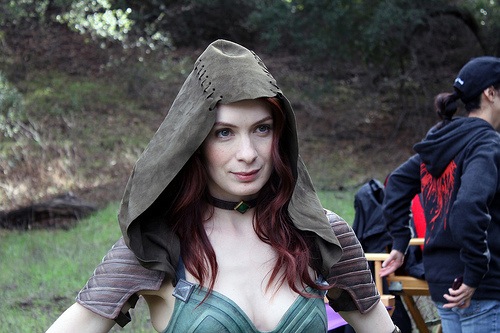 Now you have already seen this video, even on or site as it premiered on the Jimmy Fallon Show as Felicia Day was guest to promote the live action mini-series, Dragon Age Redemption.  But I figure now that the teaser trailer is now available outside of the Jimmy Fallon site, why not post it in full HD.  Felicia Day is mostly known for her writing and starting the the web series called “The Guild” and even played a role in Buffy the Vampire Slayer when she wasn’t playing World of Warcraft.  So check out the trailer once again just to remind you just how cute Felicia is with those little elf ears.  Next time we run into her, we will be sure to ask her some questions regarding the new mini-series that is being co-developed by Felicia Day and EA/Bioware that will air as a six episode web-series.  Day will star as ‘Elven thief Tallis, who gathers a band of allies together to help her find a renegade magician’.