The FIFA series has been at an all time high ever since it’s 2007 installment, FIFA 08. In the past many years, it has overtaken its arch-rival and the once supreme football franchise, Pro Evolution Soccer. And with 10, FIFA really proved that it is, without any doubt, the best footy sim franchise out there. FIFA 11 sure did improve upon the solid foundations of FIFA 10, but it wasn’t as big a revolution as its predecessor was. FIFA 12, though, seems to be following FIFA 10 in its footsteps with tons of new features, modes and overhauls that we’ve never seen in a FIFA game before. Has FIFA 12 trumped its own predecessors and come on top as the best football game ever, or does it fail miserably? 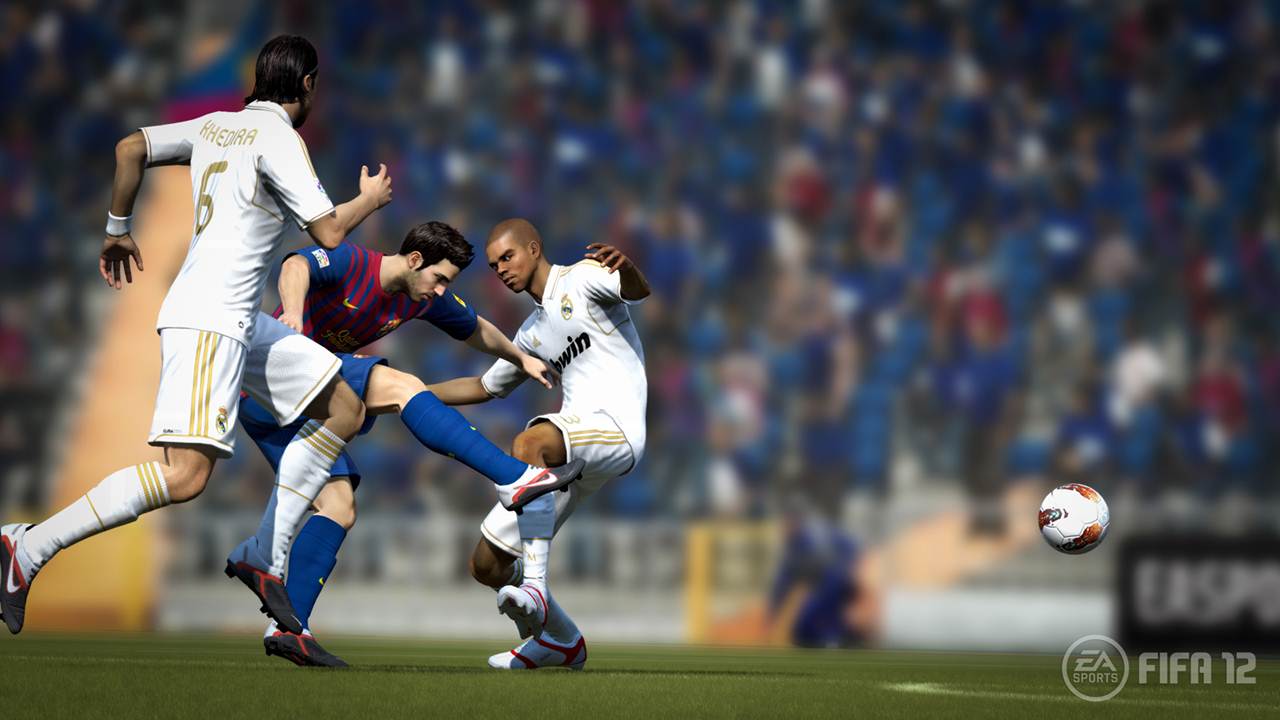 And here we go again.

The answer: a loud, emphatic yes. FIFA 12 is not only the best game in the franchise, it’s also the best sports game ever. Yes, it does have a few shortcomings, like some bugs and glitches, but ultimately, the pros of the game far outweigh the cons, and FIFA 12 shines through as a brilliant game that a lot of work has been put into by the ever so hardworking EA Sports.

When you first boot up FIFA 12, the game teaches you how to use the most noticeable and the biggest change in this year’s game- Tactical Defending. In past FIFA games, whenever you saw one of your rivals coming at your goal with the ball, all you did was mindlessly hold the tackle button, getting back on the ball as quickly as possible. This year, with Tactical Defending, things have gotten a whole lot more realistic. In FIFA 12, what you do is, you contain the player, jockeying around him, and when the time is right, you hit the tackle button and take the ball back. It requires very precise timing, and the slightest of bad touches can get the opposite team’s player injured and you a booking or a sending off. You can also call in another player to help you out, and that adds a lot more complexity to the system.

It can take a lot of time to get used to this new system of defending, especially for past players of the series who were used to mindlessly holding down the tackle button to get back in possession. But once you do get used to it, it turns out to be a very rewarding, deeply satisfying system that lends a great deal of realism and authenticity to the on-field action. 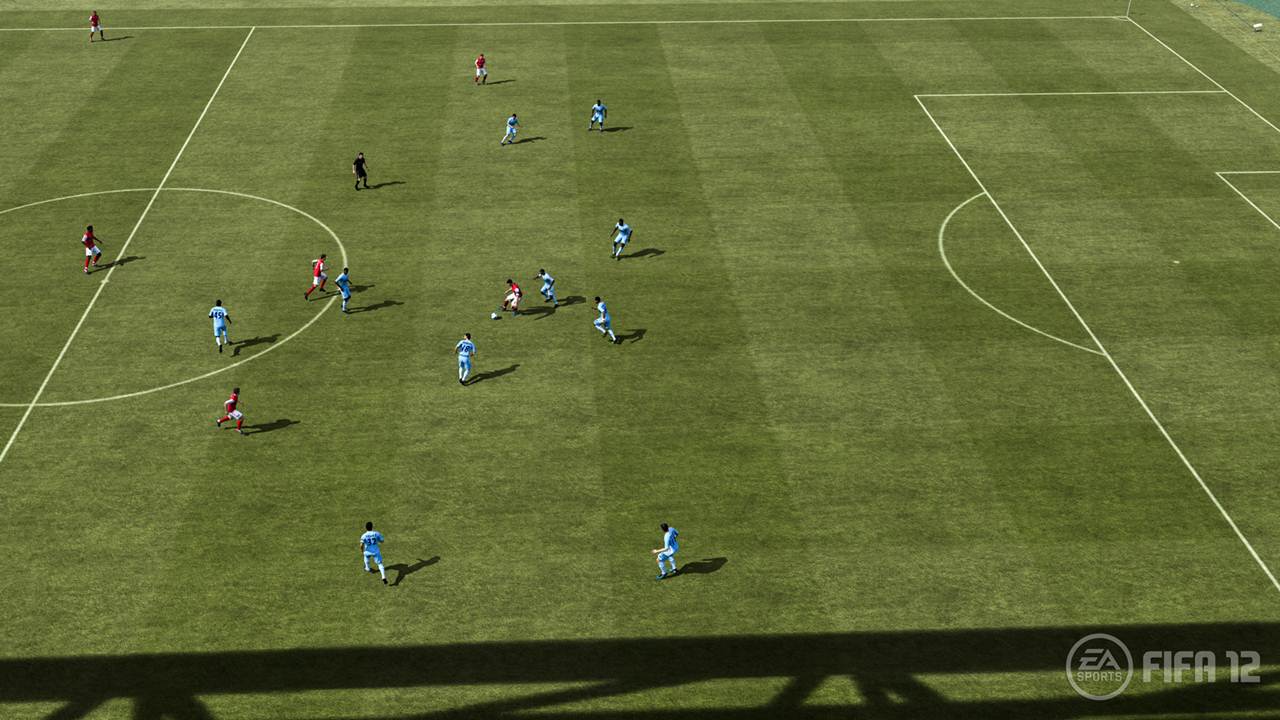 An all new camera angle provides for a much more realistic presentation.

What supplements this defending system, and the rest of the game (more or less), is the Player Impact Engine that EA Sports had been working on for three years. The Impact Engine results in some of the most authentic injuries with very realistic animations for tackles and dives, and injuries that are severe perfectly according to the momentum and direction of the tackle that hit the injured player, and where it hit him. The Impact Engine, too, is unbelievably realistic. But that’s not to say it doesn’t have problems. While for most of the part, the PIE (Player Impact Engine) provides for some very realistic physics and tackles, it sometimes results in hilarious animations of players falling each other dramatically, that aren’t particularly realistic. At the end of the day, though, the PIE does its job.

The third of the ‘Trinity’ of gameplay features is Precision Dribbling. With Precision Dribbling, you can swerve around the defense with just a tap of the button, giving you a fraction of an extra second and that much more extra space to position your player perfectly and score spectacular goals. When used in short bursts and tight situations, this can prove to be very useful.

The overall on-field gameplay in FIFA 12 feels a lot smoother than in FIFA 11. Players are more nimble and agile, they can squeeze through tight gaps more easily, and enemy and friendly AI are both very impressive. Players of the opposite teams will play to their strengths, while trying to break your defensive barriers, keeping your weaknesses in mind. The visuals of the game are stunning.

The on-field action is not even the half of FIFA 12’s brilliance though. The Career Mode, for example, has received an astounding overhaul, with more realistic transfers, player morale and injuries coming into play. If you player gets injured and is not playing well, his morale will get a negative impact, while if he performs consistently well and gets high match ratings, his morale will get a boost. Having a low morale, or not not being played in matches enough to his liking can make the player change his thoughts about the club he’s playing for and asked to be placed on the transfer window. This year’s Manager Mode actually makes you feel like a manager, rather than just a collector of all the big names in the football world.

The online mode is comprehensively better than the single player modes, though. Modes like Head to Head Seasons come to mind as an example of this. You start with your team at the bottom of the tenth division, and in a season of 10 matches each, you try to make your way to the top. There are also times you can play with your friends directly in head-to-head seasons. The EA Sports Football Club, though, is the biggest overhauls, and makes the online component feel that much more integrated and well crafted. Matchmaking is much fairer this time, leveling up and gaining experience points can be very satisfying, while seeing your favourite club rising through the ranks of an online table is just the most gratifying feeling ever.

The presentation is, as always, stellar. Pre-match build ups have been given a huge improvement, with spanning panoramic views of the stadiums better than ever before, and the new menus look slick and stylish. Visuals are stellar, the fields look great and the licensed stadiums look great too (the crowds, not so much). Player likenesses are uncanny, and commentary is as good as ever, with newcomer Alan Smith doing a good job of filling in the shoes of Andy Gray. The soundtrack that EA Sports has compiled is great too, but the lack of angsty songs like Blackout in last year’s compilation is felt constantly. But it doesn’t matter much, and makes no difference to the overall experience of the game at all. Crouch, you idiot, why?

Ultimately, FIFA 12 is about as close a football game can get to realism without being on the field itself. With a host of new features, the same great presentation that FIFA is known for and a ton of refinements to the already strong gameplay of the FIFA series, FIFA 12 is a must buy for all people who have even the tiniest bit of knowledge of the sport. The beautiful game just got a whole lot beautiful.

Tactical defending completely changes the way you play; Stellar presentation; Great soundtrack and very detailed commentary; Impact Engine provides a lot of realism to the gamneplay; Career Mode is better than ever, more realistic than you could have imagined; Online modes are a ton of fun, especially Head to Head Seasons; EA Sports Football Club is a great addition to the series; Looks stunning; Great opposition AIl; Player morale adds a whole new twist to the Career Mode; New menus look great

Several bugs and glitches; Player Impact Engine not always authentic; Tactical Defending might take some getting used to

Final Verdict:
EDITOR’S CHOICE
With a ton of new features, refinements, additions and game modes, FIFA 12 not only manages to beat FIFA 10 as the best in the series, but also comes out as the best game in the sports genre yet.
A copy of this game was provided by Developer/Publisher/Distributor/PR Agency for review purposes. Click here to know more about our Reviews Policy.