The Ultimate Edition will give fans, on top of the game, 24 Ultimate Team gold packs and will only be available for one day, European launch day, 28 September. 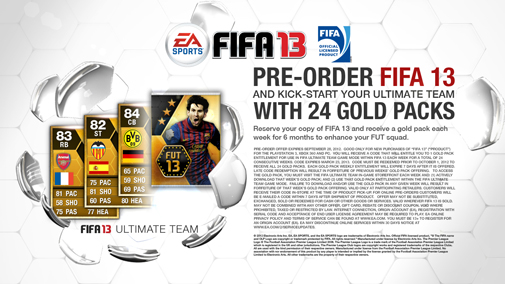 One Ultimate Team Gold pack can be redeemed per week, over 24 weeks, with a real-world value of £15. Each Gold pack conists of a random assortment of 12 items, with players, contracts, stadiums, managers, fitness, staff, kits, balls and badges, one item guaranteed to be rare. The players which can be found in Gold Packs will all be rated 75+.

Other FIFA 13 pre-order incentives are: