Available only on Xbox One, it seems. 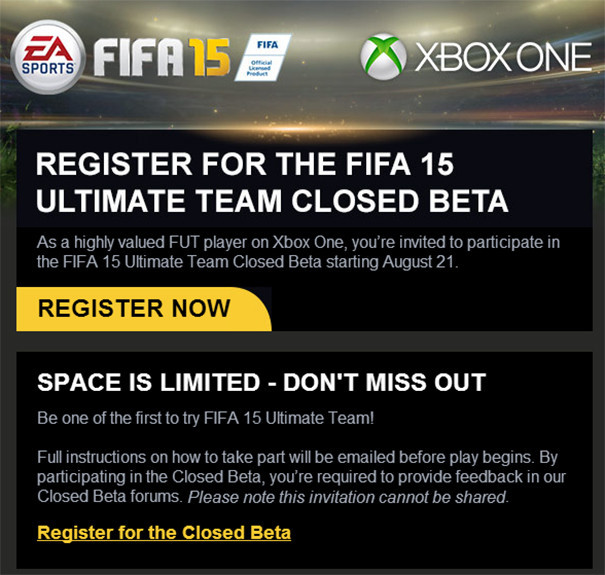 EA’s Ultimate Team modes for its EA Sports titles are pretty damn successful, but none have been as successful as the Ultimate Team mode in FIFA.They generate a lot of revenue for EA, and for a lot of people, FIFA- which, I need to remind you, sells in excess of ten million units every year– is FIFA Ultimate Team. So when EA announced that Ultimate Team would have exclusive content on the Xbox One last year, that was a big deal, and assumed to give the Xbox One an advantage, at least in European territories.

That did not happen, but in spite of betting on the wrong horse, Ultimate Team continues to thrive. However, it still has exclusivity on the Xbox One, and now next week, FIFA 15 Ultimate Team may be getting a closed beta next weekThe invitation image (see above) seems to imply that the beta will be restricted only to experienced players of the mode who own an Xbox One.

An announcement may be made during Microsoft’s presentation at Gamescom tomorrow. Stay tuned.