The FIFA franchise has been at the top of its game ever since 2007, dishing out one excellent game after another. Always keeping two steps ahead of its competition, the PES franchise, it’s hard to think FIFA can go wrong. With FIFA Street, EA Sports has tried rebooting the street football spin-off franchise and give it new life, and while it’s fun and definitely not a misstep, it’s not as good as it could have been. The biggest problem that stands between FIFA Street and the near perfection that last year’s incredible FIFA 12 achieved is the fact that EA Sports has omitted so many important gameplay mechanics here that they introduced last year. Features like Tactical Defending, Player Impact Engine, Precision Dribbling and so much more that made FIFA 12 so good and enjoyable are missing here. And it’s baffling that EA Sports didn’t include these, because they spent so much time on these features. Including them in FIFA Street would result in a longer development period and more production costs, but it would also make for a much better game.

However, there’s an upside to this- FIFA Street manages to provide the arcade-y fun that the mainstream FIFA franchise has deviated from recerntly. Without all the realism, the game’s much more chaotic and fun. And that’s what street football is supposed to be like, right? Fun?

The best feature in FIFA Street, however, is the career mode, known as World Tour. It’s a typical rising-through-the-ranks mode. You create a team with a Virtual Pro as the captain (you can also import the Virtual Pro from you FIFA 12 save), and then rise through the ranks, going from being a penniless street football team to an internationally renowned team that has the potential to beat even the best of clubs. This feeling of progress adds greatly to the experience, and each new milestone feels like a personal achievement.

This depth and sense of progression makes the World Tour mode addictive and fun, and this is probably what will keep you hooked to the game. Add to that the pure arcade fun the gameplay provides that I mentioned above, and you have one of the most enjoyable sports games out there. 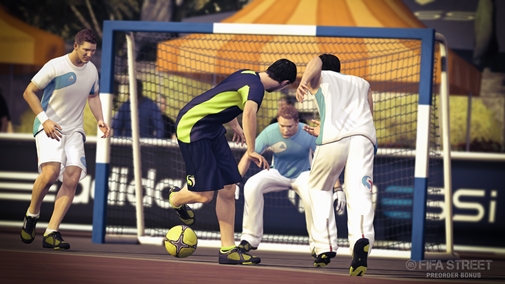 The online mode also is a great deal of fun, if not as much as the career. It’s not as complex and intricate as what you saw in FIFA 12, quite unsurprisingly, but it’s still pretty enjoyable, and head to head battles are a pure blast.

FIFA Street relies heavily on style- everything you do earns you style points, and these style points earn you experience or help your team progress in a league. Everything you do in matches earns you these style points, but some actions earn more of those than others. Performing neat tricks or complex actions or scoring impossible goals will get you more points than scoring a normal goal or dodging a tackle. It’s a pretty simple system that doesn’t require much thought and depth, and works fairly well in its own rights.

The controls, however, don’t work so well. They’re basically the same as those in any other FIFA games, other than a few simplifications. However, the players’ movement feels much stiffer than it should. Tackling feels disastrous, and sprinting is more harmful to you than advantageous. Oftentimes, the game simply didn’t respond to my commands. There were so many times when a player simply failed to pass the ball, even after i literally smashed the X Button repeatedly. This constantly gets in the way of the action, and unfortunately, I cannot say it’s a small hindrance.

I also want to mention the presentation of FIFA Street. In typical FIFA fashion, it’s absolutely fantastic. The menus are slick and stylish, the stadiums (or arenas) look great, the visuals are amazing, character models are wonderful and camera angles and mini-cutscenes will blow you away. Considering this is a FIFA game, good presentation is kind of a given. 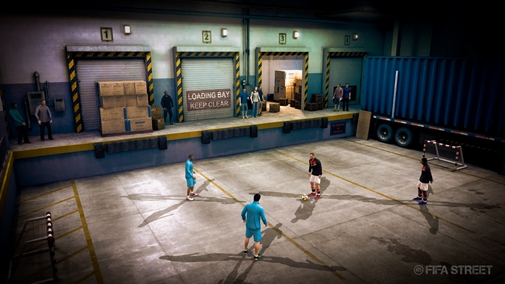 Ultimately, FIFA Street reboots the sub-franchise fairly successfully. It hits a few roadbumps, and it definitely has plenty of flaws that are absolutely not negligible. But a great career mode and enjoyable gameplay make it a great game, one that football fans definitely should try out.

Great graphics and presentation; The career mode is engaging and reasonably deep; Head to head online battles are a ton of fun; Seeing your team rise through the ranks is very satisfying; Excellent character models; Addictive and extremely enjoyable

A lot of gameplay mechanics from FIFA 12 haven't been carried over; Not enough variety; Controls feel stiff and unresponsive at times

Final Verdict:
GOOD
While FIFA Street can be fun and addictive at times, it has several glaring flaws that hold it back from the greatness it has the potential to achieve.
A copy of this game was provided by Developer/Publisher/Distributor/PR Agency for review purposes. Click here to know more about our Reviews Policy.