Who doesn’t remember choose your own adventure books in their youth? Endlessly drawing maps onto a separate sheet of paper to catalogue your adventures, keeping seven or eight bookmarks at your side so you could go back to a previous page if you made a mistake and religiously re-treading your steps in the hope of finding the best way through the story. Back before I had enough money to regular invest in gaming, these things gave me my interactive entertainment fix, none more so than the classic Fighting Fantasy series. A version is now available on PS minis for The Talisman of Death that is playable on both PS3 and PSP. Though it is an excellent way to experience the book, there might not be enough new additions to get non-fans of the Fighting Fantasy series interested. 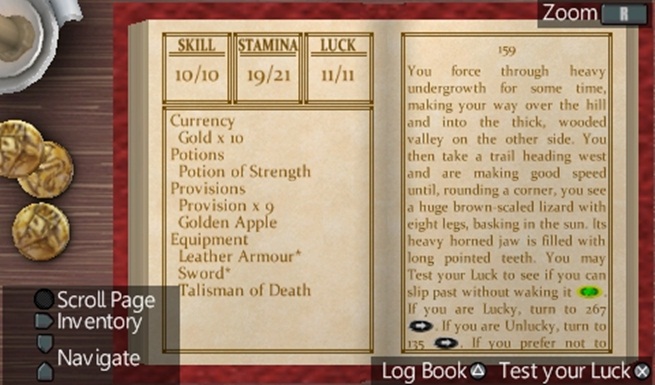 It’s a book. A good and interactive one, but it doesn’t get much flashier than this

The game follows the plot of the book by the letter, with your character being snatched by the mystical land of orb and tasked with recovering and protecting the Talisman of Death. The only way to protect it is to return with it to your own world so that it is out of the dark lord’s reach. It’s all very standard high fantasy, but it is altogether a very engaging experience, provided you can enjoy the clichéd nature of it all. The pacing too is immaculate, with a well struck balance between action and role-playing. Considering a game like this lives or dies by the story, it’s a good start knowing that Talisman of Death is an exhilarating tale and a real page turner. I guess page turner isn’t appropriate to the video game adaptation, but you get what I mean.

Whilst the story is as rock solid now as it was back in the 80’s, the video game conversion is a mixed blessing in my eyes. The game is recreated very faithfully, to the point where the text has literally just been copied onto your screen. I was kind of excited at first to see how the world of Orb would be rendered in a PS minis title, and so was a little disappointed to suddenly see a book not dissimilar to the originals I enjoyed in my youth show up on the right side of the screen. That said, it’s how Fighting Fantasy was supposed to be enjoyed, so I can’t really complain too much. The concern I have though is this classic text based format might put off those new to Fighting Fantasy due to the excessive amount of text you need to read through. 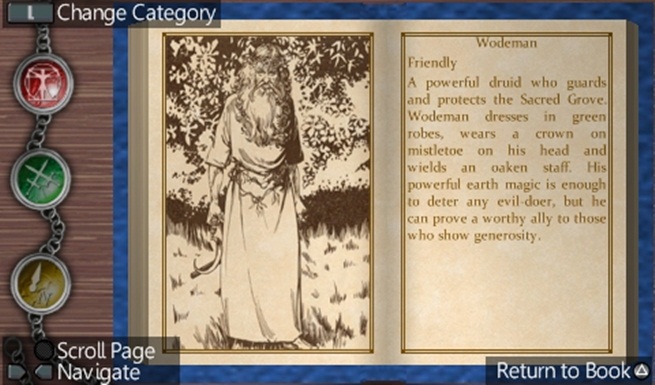 The log book offers more insight into your quest, but it adds to the sheer amount of text in the game

As far as additions are concerned, there are a few things that make this version an improvement over sitting there with the book on your lap. A logbook is available that you can access at any time with detailed information on the items in your inventory and the characters you have encountered during your journey. It’s a nice touch in case you forget about something, but it’s unlikely to revolutionise the way you go about playing the game. Further enhancements come in the form of how combat is handled, with a choice of dice or non-dice based methods. The dice method plays out exactly as it did in the old books, with random dice rolls being added to skill scores to determine your success in a combat scenario. For those who want a more standard “game” style of combat that isn’t as random, the non-dice method offers a moderately enjoyable alternative. A selection of different symbols appear that result in you winning that particular turn, losing or clashing swords with your opponent. The ratio of these symbols is based on both contestants’ skill scores, with more appearing in your favour or vice versa based on how high your skill is in comparison to your opponent. You get to see all the symbols, which are then jumbled up and flipped over. You then have to try and find a favourable symbol in the mashed up pile. Success makes you damage the enemy, but drawing an enemy symbol means you take damage. It’s a simple and fun way to make more of a game out of the combat, but it is exceptionally easy. You can almost always see where the positive icons fall and, because of this, combat is an absolute breeze when you play without dice. 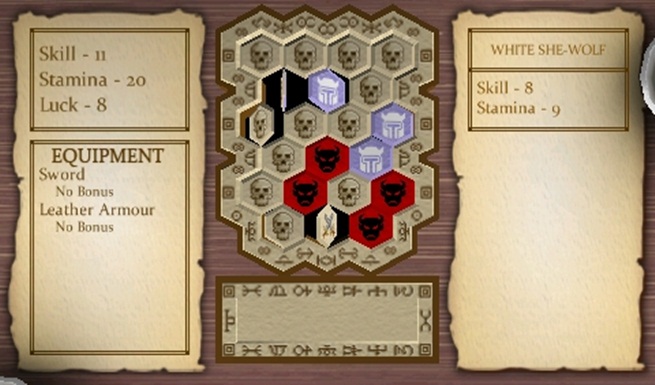 Non-dice combat makes a proper game out of the proceedings, but it’s a little too easy

All in all Talisman of Death offers a fun way for those who never read the book to experience it. It’s a functional port that tells a fantastically involving choose your own adventure, but those who’ve already read the story won’t find anything here worth concerning themselves with. If you like these style of books then you could do worse, as the game version offers good value for money. It’s worth thinking about however, as there is a lot to say for having an actual physical copy of the book. It’s your choice whether this is enough to make or break the deal but, rest assured that if you do pick up a copy on your PS3 or PSP, your money will be well spent.

Fantastic story, Non-linear gameplay, Choice of combat modes, Well paced, Good value for money, A brilliant nostalgia trip for anyone who grew up with the books

It's literally a book in digital form, Non-dice based combat is very easy, You can't skip pages and cheat like you could with the books, Might be tough for non-fans to break into

Final Verdict:
GOOD
A classic high-fantasy adventure, Fighting Fantasy on Playstation Minis distils nearly all the elements that made the classic choose your own adventure books great into a concise, if overly classic, package
A copy of this game was provided by Developer/Publisher/Distributor/PR Agency for review purposes. Click here to know more about our Reviews Policy.