Football Manager as a series usually faces more scrutiny with its annual instalments than other annual sports game franchises do. You see, unlike those other games, Football Manager is entirely about the larger metagame of managing a football club, which means you can’t have a whole lot of changes to the moment to moment gameplay that instantly communicate what has changed to the casual bystander. Then again, Football Manager has never been a franchise for casual fans- it’s always been something intended specifically for the hardcorest of all football fans, fans who immerse themselves entirely in every aspect of their favorite sport and their favorite club, people who live and breathe football.

These people love Football Manager because it is, bar none, the most robust and full featured simulation of exactly what it would be like to have your own football club. These are the people who will be buying Football Manager this year (as with all years), and they’re not interested in slightly shinier graphics (though that’s there, if you want it), or new modes (though there are a lot of modes here). Instead, they’re more concerned about whether the reports you get after each match, transfer, and season are now presented better, or whether the general UI, which is all you’ll be spending your time on, has been fixed. 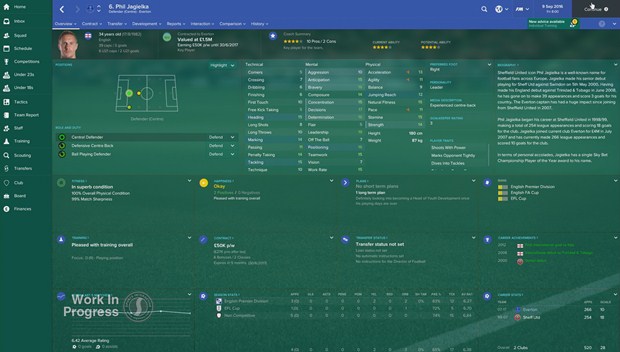 "The match engine, however, is superficial dressing for a lot of the more hardcore FM players- for them, the bulk of their time will be spent in the menu screens."

The good news is that the answer to both of those questions, and to many more, is yes. Football Manager 2017 takes on the excellent base that its predecessor laid down, and builds on it, delivering what is undoubtedly the most compelling entry in the series, and also the definitive football game experience for football maniacs around the world.

The most obvious change in Football Manager 2017 is the match engine, which simulates each match for you on screen- previously, the match engine tended to favor certain kinds of plays and strategies over others (ignoring, in many cases, your own strategies, or even what was happening on field sometimes), leading to an unsatisfying experience. This was a very rare occurrence and was not likely to be something you would notice over even dozens of hours of play. Football Manager 2017’s match engine is more robust- matches play out in accordance to your strategies, players seem to be more dynamic with what they do, and so many games come down to thrilling, nail biting finishes.

The match engine, however, is superficial dressing for a lot of the more hardcore FM players- for them, the bulk of their time will be spent in the menu screens. The good news here is that the UI has been largely improved too. The most significant area that saw improvements was the reports you get- earlier, it was easy to get lost in the flood of menus that would ensue as you tried to go through your inbox. Football Manager 2017 is an improvement over the previous games in the series in that regard, and it is now possible to act on reports from directly within the inbox itself. 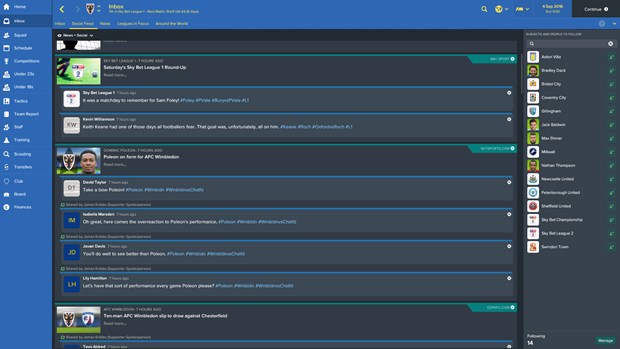 The game has just become better in general at presenting its tomes’ worth of information to the player better- there are now extremely well designed pre match and post match reports, that tell you what your areas of strength and weaknesses are and have been, allowing you to plan better.

In general, that’s the big theme with Football Manager 2017– it is not a game that focuses on doing much new, it’s a game that focuses more on doing what it already did better. The fixes to the match engine should have made that clear, and that also extends to how the game handles its menus and its UI. In general, the idea here is to make Football Manager more fun to play.

That said, there are new additions to the mix here- the social media feed, for example, which aggregates responses from all social media networks to your various moves, is fascinating, and probably my favorite part of the whole experience. The social media feed shows you how fans are taking to your various victories, losses, and even signings, and true to life, can be hyperbolic and brutal (just wait till you finish a signing the players disagree with- your ego will be tattered and bruised beyond belief).

The social media feed also has the benefit of keeping you connected with the larger football world in the game. Too often as you play Football Manager, it is easy to exist in your own bubble, with the other clubs and events only becoming a consideration when they interact with you in any way. However, the social media feed is not just about you, but also about other clubs and the larger football world in general, ensuring that the world of football manager seems even more authentic and real than it otherwise does. 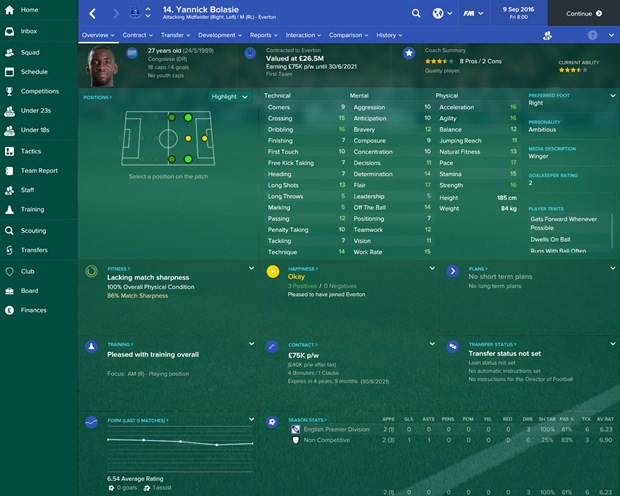 "Football Manager 2017 is more of the same, just bigger, better, and more refined. For many, that is exactly what the series needed."

The authenticity is also helped by random events in the game- these have always been a thing, of course, and while they can be frustrating, they also reflect how things work in the real world. They have now been updated to reflect some real world occurrences and developments, such as Brexit. The best part is, the game deals with this sensitive issue in the most apolitical manner possible, while still assessing the effect it will have on the larger world around it.

In the end, if you don’t already like Football Manager, this year’s entry is unlikely to change your mind- there’s not much new here, and indeed, the issues that existed in previous games still persist to a large degree. But if the series is your jam, then this year’s entry will appeal to you more than any previous entry- Football Manager 2017 is more of the same, just bigger, better, and more refined. For many, that is exactly what the series needed.

Refined match engine, refined UI, stream of information and flow constantly keeping you connected with what is going on with your club, and the larger football world, authentic.

Still obtuse for new players to get into, and issues from previous entries still largely persist to a very large degree.

Final Verdict:
GREAT
Football Manager 2017 is more of the same, just bigger, better, and more refined. For many, that is exactly what the series needed.
A copy of this game was provided by Developer/Publisher/Distributor/PR Agency for review purposes. Click here to know more about our Reviews Policy.