Some inherent self contradictions in the game's design stop For Honor from truly shining.

For Honor is actually a refreshing departure as far as Ubisoft’s output is concerned- this is not an open world action game with icons littering the minimap, which in turn must be unlocked by climbing and navigating towers. Unlike a lot of other Ubisoft games, that feel like they came off an assembly line churning out open world action games, For Honor is fresh. For Honor is different. It has its own distinct identity, and it sets about to assert that identity right as soon as you start playing the game.

For Honor basically follows a melee combat system – and it is highly tactical, simply button mashing your way through the game is not going to get you anywhere, and will result in almost certain death – wrapped into the veneer of an online multiplayer game, which in turn is wrapped into an online war simulation meta-game. There are multiple levels and layers to For Honor– so much so, that it can actually feel incredibly daunting the first time you boot the game up.

"For Honor has some excellent tutorials, explaining not just how its basic mechanics work, but also how the flow of battles in a multiplayer game is structured, and how the larger war meta-game functions."

Thankfully, the game understands this, and right off the bat, gently starts easing you into its world and mechanics. For Honor has some excellent tutorials, explaining not just how its basic mechanics work, but also how the flow of battles in a multiplayer game is structured, and how the larger war meta-game functions. If you play its campaign, you are further treated to essentially an extended tutorial for each of the game’s classes and factions.

The end result of all of this is that in spite of the depth and breadth of mechanics and options that the game presents you with, you don’t actually ever feel overwhelmed. The game slowly teaches you to internalize its many workings, so that no matter what mode of the game you find yourself playing, you should be able to hold your own, at least as far as knowledge of the mechanics goes- how you do after that comes down entirely to your own level of skill.

And For Honor demands skill. In For Honor, defense is as important as offense- if your enemy is attacking you, you need to know what direction the strike is coming in from, and block and fend it off appropriately. Simply spamming a button won’t work- you need to orient your block in such a way that it cancels your opponent’s blow. You can choose not to parry attacks, and try to dodge away. Similarly, when you attack an opponent, you can’t just try raining blows down on them- you need to watch how they are blocking your attacks, and attempt to attack from a different direction. Conversely, you could try breaking their parry, and then simply slamming them into the wall, or off the battlefield, with your own momentum. You must also decide if you want to use a light attack or a heavy attack. And all this while, you must also watch your own stamina, because if you ever run out, you become easy pickings for your opponent. 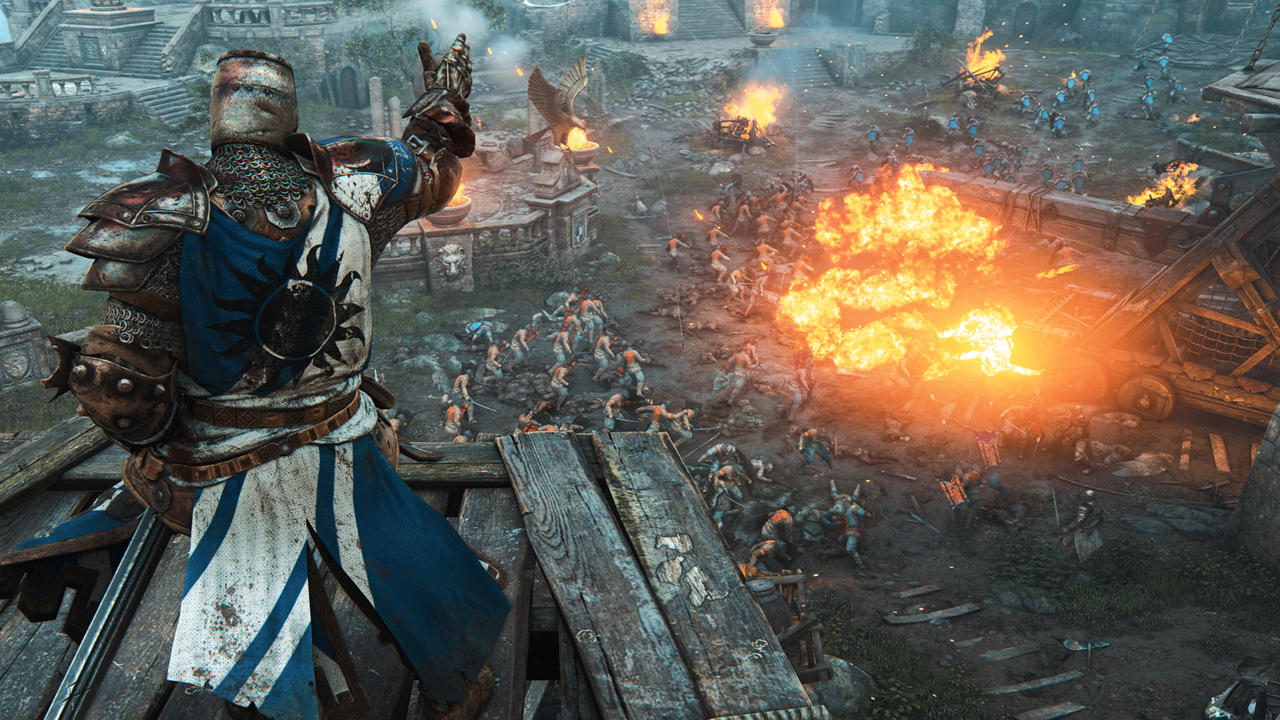 "For Honor is basically a highly tactical melee combat system – and it is highly tactical, simply button mashing your way through the game is not going to get you anywhere, and will result in almost certain death – wrapped into the veneer of an online multiplayer game, which in turn is wrapped into an online war simulation meta-game."

But wait, there’s more- For Honor gives you perks and feats, special moves you can activate in battle. Running low on health? Use your perk to regain some of it in battle. Feeling swarmed by enemies? Just activate your higher speed perk, and hightail it out of there. Perks and feats are not actually available in all game modes, but where they are, they become just one more thing for you to keep track of.

Once you have mastered the mechanics, you probably want to venture into the online modes. There are a whole lot of these- there’s Duel (where you battle an enemy one on one), Brawl (which is a two on two variant of Duel), Dominion (which is an objective based multiplayer mode, charging you to take control of multiple objectives on the map, and then keeping a hold of them), and Deathmatch (which is exactly what it sounds like, and comes further in two variants). Duel and Brawl are arguably For Honor distilled to its core essence- just you and the enemy, playing a game of each player trying to outguess and out-guess the other player. This is the mode where you need the most skill, the mode where you have to use the multiple, finely crafted mechanics in the game to try and win against your opponent on sheer mastery of For Honor and nothing else. And while Brawl sort of cheapens that a bit (the mode basically becomes a game of both sides trying to whittle down the other side to just one player, so they can then overwhelm him), hardcore players who appreciate the finesse in For Honor will probably end up appreciating Duel mode the most.

The problem of being swarmed and overwhelmed, however, is a persistent one in For Honor– the game’s mechanics are fantastic. However, they are designed and tweaked best for 1 vs. 1 combat- the minute you introduce more players into the fray, things get messy. Deathmatch and Dominion games become problematic, because the minute you find yourself taking on more than one player, you are effectively guaranteed to lose- you cannot win in a situation where you are battling two players at once. This problem is especially prevalent in Dominion, where in addition to the players on the opposing team, you also have to contend with dozens upon dozens of ‘soldiers’, AI controlled bots, on the field at once.

"There is something strangely compelling about For Honor‘s mechanical depth and finesse, and with how it chooses to apply that to a larger scale with its multiplayer modes, and then to a larger scale still with its war simulation meta-game. "

This creates a fundamental self contradiction within For Honor- it has this intricacy of mechanics that works wonderfully well, but is undermined by the game’s insistence on being the medieval equivalent of a multiplayer shooter. Don’t get me wrong, Dominion and Deathmatch are still fun modes – and there is a thrill to capturing an objective, and then fending off an enemy who comes to take it from you, winning by the width of a hair – but they are more susceptible to variables outside of the player’s control, often feeling unfair as a result.

For Honor is also besought with a fair few other issues- it’s early days for the game yet, but matchmaking and connectivity issues are surprisingly prevalent. I’ve never had so many connectivity issues in any of the other online games I play, across at least four other systems. Considering that For Honor is an online only game – even its single player campaign modes mandate a connection to Ubisoft’s servers – this can be frustrating. It’s not game breaking, and honestly, the problem is likely to be resolved in the coming few days. For Honor is also one of the few games where you can almost justify its always online design, especially thanks to its persistent meta-game- but after three straight disconnects right in the beginning of a Deathmatch, I was pretty annoyed.

I was never annoyed enough to stop playing it entirely, however. There is something strangely compelling about For Honor‘s mechanical depth and finesse, and with how it chooses to apply that to a larger scale with its multiplayer modes, and then to a larger scale still with its war simulation metagame. For Honor is not a perfect game by any means – the campaign’s banality, the connectivity issues, the contradictions inherent within its very design ensure that – but it is, most of all, a fun game, and it is a game that has some real depth and soul to it.

Connectivity and matchmaking issues, inherent self contradictions in the game's design with the potential to be swarmed by enemies, banal and trite campaign

Final Verdict:
GOOD
For Honor is, most of all, a fun game, and it is a game that has some real depth and soul to it.
A copy of this game was provided by Developer/Publisher/Distributor/PR Agency for review purposes. Click here to know more about our Reviews Policy.