There is some solid fun to be had in Forced, if you can ignore some of its issues.

Forced is the purest of examples of a Kickstarter project gone right. Supporting up to 4-players locally or online Forced is an arena-based, hack ‘n’ slash game that plays from a top-down view, packed with action. Providing a level of challenge and tactical combat that demonstrates a clear understanding of balancing difficulty with gameplay, Forced is addictive.

Opening up with a short motion comic-like sequence that details the story of the game, Forced makes a strong attempt to immerse you within its plot. Playing as a captured tribe member and raised from an early age to prove your worth as a gladiator, you play as a nameless slave chosen to compete in a series of trials. While this sounds strong and has the potential to be something amazing, it’s all to familiar and has been done to death. The games’ story may not win any awards but that’s not where its intentions lie. 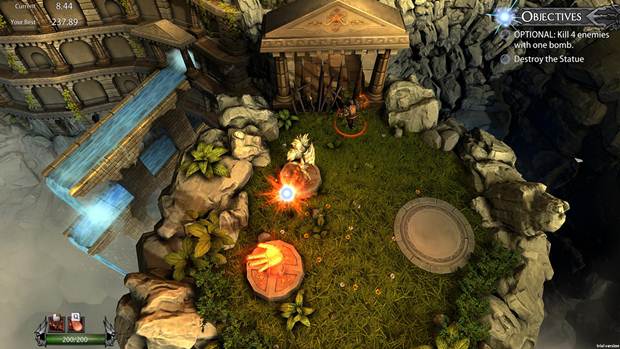 "Where most games that involve puzzles often come with frustration and minor headaches due to repetition, Forced does not."

The story isn’t strong by any means and is not likely to be remembered. This may seem like a bad thing but fear not, the game itself doesn’t need it. It’s only purpose here is to give reasoning for playing, and I would have been just as pleased if it didn’t have one in the first place. Summing up the plot within its basic terms, it’s here to give you an arena based combat game so you can smash the guts of demons. The story isn’t meant to be taken seriously nor did I try too. The game’s high point lies in its gameplay, and this is obvious throughout the endless hours you may dedicate yourself to in experiencing it.

Not long after the game’s brief introduction you’re thrown into the life of your character, and are guided through a training-like tutorial that familiarizes you with the mechanics of the game. This is done by a character in the game named Balfus that takes the form of a spirit mentor. The humorous and likable nature of this character stops the game from feeling like a tutorial and more like an actual guide, or a partner. Although the game gives an option to skip the tutorial stage it would be wise to see it through as it introduces you to the concepts of the game.

Balfus also serves as a secondary item in the game that you control  to solve puzzles. It wouldn’t be fair to call these segments of the game puzzles, more like tactical objectives that require light thinking and a tight form of accuracy and control. Where most games that involve puzzles often come with frustration and minor headaches due to repetition, Forced does not. It integrates the puzzles so well into its level design and gameplay, and allows the whole idea of a gladiator based combat system to feel aggressive while remaining strategic. 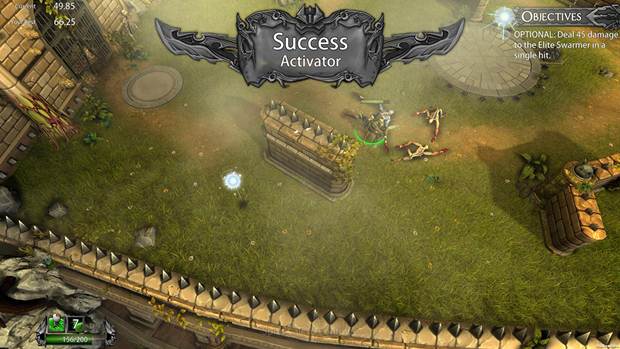 "Taking the form of arena-based combat the purpose of each level in the game is simple, but regardless of its simpleness it doesn't fall flat at any point nor does it feel repetitive."

Its worth pointing out that this game has some stellar voice acting, and this carries on through all of the characters that speak out in the game. Particularly Balfus who has a human-like quality to him that’s easy to engage with. Balfus also acts as a hint system to aid you in trying to solve the arena puzzles for when you find your self stuck.

Taking the form of arena-based combat the purpose of each level in the game is simple, but regardless of its simpleness it doesn’t fall flat at any point nor does it feel repetitive. In each match you are given a set of objectives to complete which revolve around solving puzzles while being lumbered in combat. During all this madness different enemy types will enter the arena in a gladiator-like fashion, and will try their hardest to tear you in two. It’s both immersive and fun, and does well to keep you in the heat of action.

Level design is presented the form of halls each providing a choice of trials. Anyone of these trials can be entered so long as your character meets the required skill level. Skill level rises as you spend more time in the arenas and become more adapt to your weapon and class. While you play through the games arenas you are being timed and given certain challenges to aid in leveling up your character. Taking part in these trials allows you to earn crystals which are key in to getting your character to reach its full potential. 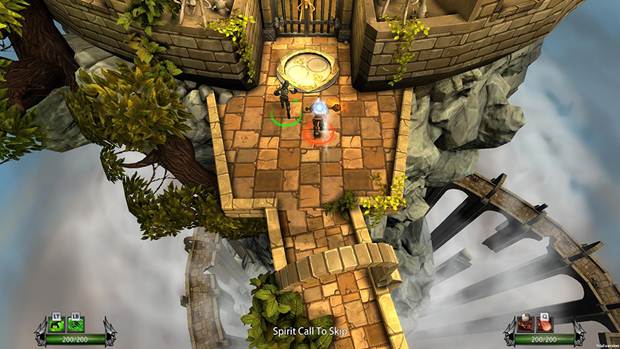 "Regardless of how much I favored a particular weapon, when you're under pressure by a horde of enemies and you are trying to complete a puzzle sometimes it's best to change class."

The more objectives completed within the level the more crystals are rewarded as a result. Although it’s not necessary to obtain every crystal it would smart in doing so if you wish to make your character become more powerful. As the game incorporates puzzle elements in its objectives, you must be wise with what class you choose beforehand. Different enemy types will have advantages as well as disadvantages to your chosen class, and this can become a pain when trying to complete the objective.

I found this out the hard way. Regardless of how much I favored a particular weapon, when you’re under pressure by a horde of enemies and you are trying to complete a puzzle sometimes it’s best to change class. But this is also the reason why the game emphasizes co-operative gameplay. Forced manages to blend challenge with gameplay in a way that other games would be wise to take note off. The effort placed into its gameplay is very noticeable and it’s here where the game wins its awards.

Forced deploys a very in-depth class customization that uses a perk system that can be set up for each match. Known as the preparation room you’re also able to adjust your character traits and change classes. During the match you can play with these perks also known as Marks and each one requires a cool down meter before being activated again. Despite the detailed customization options the game remains largely player-friendly and is more than easy enough to wrap your head around. Because of its easy going nature it’s accessible to just about anybody and those already familiar with these type of games will feel right at home. 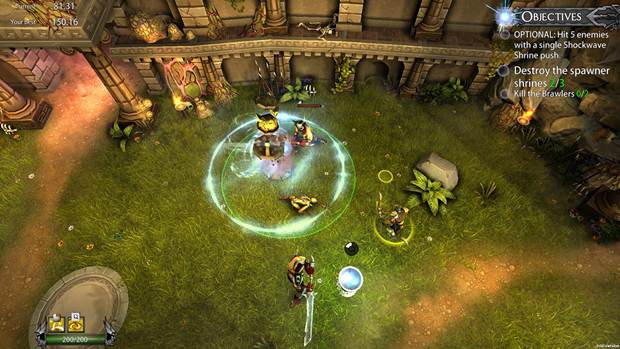 "An obvious factor in the game is the visual theme and resemblance that it bares to League Of Legends. But this is nothing to be turned off by as Forced manages to house its own personality and its own style of play in doing so."

It’s a no-brainer that this game is best played with a team mate and the overwhelming number of enemies, that can appear on screen at once will prove this. Packed with variety of enemies all holding a resistance and a weakness to different character classes. Experimentation and getting to know all four classes is a must. Being strategic with your attacks and trying not to boxed of into a corner is something you would do well to learn as this is more likely to happen more times than you would expect.

Alongside the single-player and co-operative mode there’s a survival mode. This plays essentially as a series of enemy waves in combination with a time limit. While survival mode is a nice addition to keep things fresh, and serves as an alternative to the main story mode. It doesn’t do much to differentiate itself from the scenarios that take place within the story mode. Perhaps if this was elaborated more and gave options to those not available in the story mode, it would be more worthwhile.

There’s also the implementation of a scoring system that is visually represented through the thick of all the brawling. Numbers float from skulls of dead enemies indicating your points.  This goes hand in hand with its ranking system and co-operative centric style of play that the game influences you to take part in. Forced also gives you the option to stream to Twitch TV directly from its main menu. This contributes to its co-operative nature and will do well in building a fan base for itself. But as the game holds similarities to games such as League of Legends and Diablo 3, this may pose a challenge for it.

An obvious factor in the game is the visual theme and resemblance that it bares to League Of Legends. But this is nothing to be turned off by as Forced manages to house its own personality and its own style of play in doing so. Playable on a variety of PC configurations the requirements are scale-able across four different options. Appropriately labeled Ugly to Beautiful, these settings do not lie as the game looks fantastic and runs butter smooth at a solid and stable frame-rate. 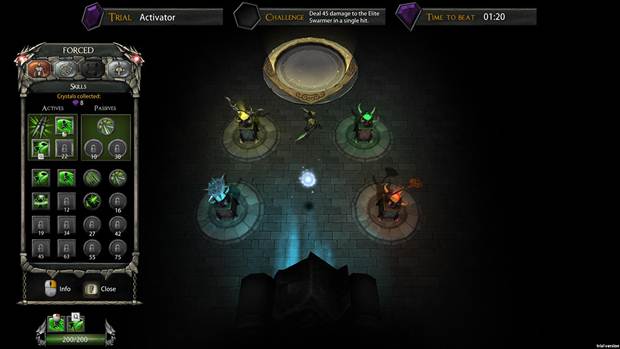 "All in all, tactical combat for the fingers and a colourful treat for the eyes, Forced is out in full force."

Playing host to some very rich and detailed environments, Forced would fool you into thinking that it wasn’t a Kickstarter funded game. The level of polish is incredible thanks to its lovable art style that borders across cartoon fantasy and exaggerated realism. Being pushed to your limits in desert wastelands, lava flowing dungeons, and trap-ridden mazes, the game provides the player with a reasonable selection of environments to do battle in.

Key elements within the game such as ornaments keep the theme of the game on similar grounds across all of its arenas. Popping bold colours and a number of visual effects to compliment its gameplay, Forced is a force to be reckoned with. It may not be be breaking any new grounds on a technical level but nevertheless it’s gorgeous.

Supporting both a controller or a mouse and keyboard, its easy to say that a game like Forced is best played in a traditional fashion. Testing with both methods I found the controller to be more slow paced and awkward with certain weapons. Using a mouse and keyboard on the other hand serves up a satisfying method of control, as attacking enemies in the right direction is essentially crucial to survival. You click to attack in the direction you’re facing and are forced to be quick on your feet and keep moving.

All in all, tactical combat for the fingers and a colourful treat for the eyes, Forced is out in full force. Invest your hard earned money into it, but only if you are a fan of the genre.

An immense level of challenge that's complimented by beautiful visuals.

Not much going for the survival mode.

It's clear that story telling is not where Forced succeeds, but thanks to its compelling gameplay and co-operative focus I can confidently say 'Who Cares'?

A copy of this game was provided by developer/publisher for review purposes. Click here to know more about our Reviews Policy.
Tagged With: betadwarf, forced, pc, Steam