Forge has been developed by a bevy of teams including Dark Valve Games, Digital Confectioners, Super Genius and Origin. With so many companies working on this game, you kind of wonder why it’s not fun.

Forge can easily be described as a Guild Wars player verusus player game rip off.  The PvP is broken down into five types; Team Deathmatch, Capture the Flag, King of the Hill, Arena, and Relic Assault. There’s no real originality to any of these versions but you could spent more time if you keep randomly changing it up.

The tutorial shows off some interesting aspects like wall jumping like you’re the Prince of Persia, however it didn’t seem to make sense for a heavy warrior to be wall jumping. But it really doesn’t matter. The tutorial doesn’t really go over how to use your special abilities that are displayed on the bottom tool bar.

The art is pretty decent and there’s a lot of special effects that go on during your attacks. I was surprised that since everyone’s attacks use over done special effects, there wasn’t any slow down or performance hit. Unfortunately with everyone’s special attacks going off at the same time, it becomes hard to see what’s happening and if you are watching your special effects or someone else’s. It becomes a jumbled mess and sometimes death is welcomed so you can wait to respawn and not have to stare through the spamming special effects.

With the special attacks and different classes, you would think that when the matches start there would be some sort of strategy. Instead it was just a cluster fudge. The Pathfinder would certainly be more useful since they’re typically a ranged shooter, but when you get bum rushed you’re left with no choice but  to run in and fight too. But it made no difference really. If you switch over to a Warden, a warrior clearly built for brawling, you just end up dead anyways.

With all the class separation and special abilities it’s disappointing that Forge really can’t get past being a hack and slash, player versus player, brawl. It’s hard to place the blame. Gamers are just going to exploit what they can, but when a game has no real structure it’s bound to fall into chaos.

And so the question I keep wondering is why it’s worth getting this game? Guild Wars is such a good game that I seriously doubt anyone playing it cares to leave that game in order to play a chaotic PvP version. And since Forge doesn’t have a campaign mode there’s no value in playing either offline or by yourself. And a campaign mode of Forge would most likely be a Guild Wars rip off anyway. 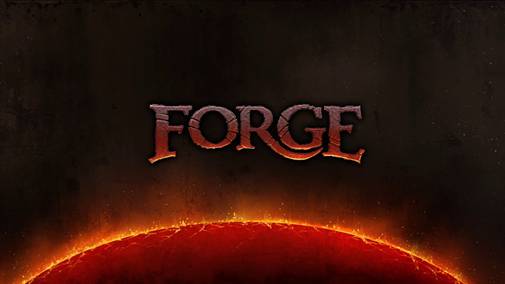 For what it’s worth there are an over abundance of games recently released that offer so much more for your money than Forge. Two games that I recently reviewed come to mind, Doom and PainKillers. With Painkillers you get a huge, good looking campaign mode. They then up the ante with a strong PvP with old and new HD maps. With Doom, you get three full blown games and some fun PvP. Sure it’s first person, unlike Forge’s third person, but it’s very similar. Both version require no skill and come down to all out brawling which don’t require and real class distinction. Forge offers leveling up per class but it gets lost in the brawling.

Forge brings PvP to the Guild Wars genre without asking anyone. It offers nothing innovative nor does it redefine anything. The class system becomes boring when the game stumbles into a brawl. The graphics are adequate and the special effects are cool, but in the middle of the brawl there’s no telling if it’s your effects or someone else’s. If you have money and time to kill I would highly suggest you spend your pennies on other games with a lot more value.

Graphics are adequate and the special effects are cool.

Game has no real structure, special effects can become a jumbled mess at times.

Final Verdict:
MEDIOCRE
Forge lays down the smack with some old fashioned player versus player in this third person, Guild Wars wannabe.
A copy of this game was provided by Developer/Publisher/Distributor/PR Agency for review purposes. Click here to know more about our Reviews Policy.