An incredibly strong showing by Games with Gold- again. 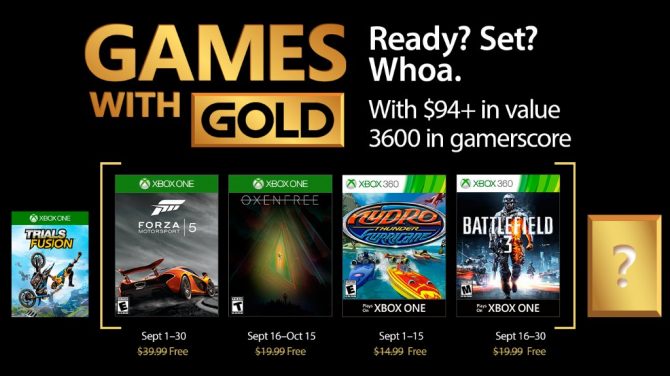 After a relatively muted outing last month, Xbox Live Games With Gold is back with another strong offering this month, with at least three out of the four titles that it offers players notable, major games, and all of them critically acclaimed as well.

For the month of September, Xbox 360 players will be able to download Battlefield 3 and Hydro Thunder Hurricane; as is always the case, both of these games will also be available to Xbox One players, and they are both also being added to the list of Xbox 360 Backward Compatible games on Xbox One.

Xbox One players, meanwhile, get the excellent Oxenfree, as well as the flawed, but still compelling, Forza Motorsport 5, next month; the latter is possibly the weakest Forza game, but it’s free, and it still retains the series’ core, addictive gameplay, so I hardly think anyone will be complaining.

So, yes- it’s a great showing. It will be interesting to see how Sony’s PS Plus offering this month compares.