Fruit Ninja Kinect took me by surprise. I wasn’t expecting the mobile version of the game to scale so well on Xbox 360.  Half Brick studios optimized the game well on the iOS platforms, to an extent that it was incredibly responsive. Here they’ve managed to show how well Kinect can track movements, and I believe this is one of the most addictive games you’ll play this year. The core of the game is the same here, as you would find on the iOS platforms. However, it manages to retain the high octane action, and gives your body a good workout. It’s not that easy standing and waving your hands trying to hit all the fruits. Due to the decent tracking, it isn’t solely based on luck but your quick thinking and presence of mind as well.

The calibration is pretty simple, and does not require you to waste more time in it. You can start playing almost immediately, due to the nicely designed user interface. Getting high scores, however, depends on luck, as it is difficult to say, score 700 odd in the Arcade mode. It is possible, though. The leaderboards are nicely integrated in the game and you can compare your scores with other Xbox Live members pretty easily. 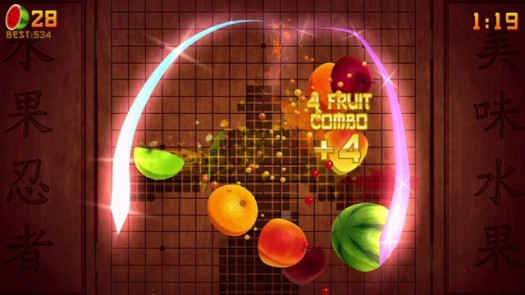 The goal of the game is to slash as many fruits as you see, ranging from watermelon, apples, and bananas which look really colorful. In a way, it’s a bit satisfying to slash because of the “squishy” sound. It doesn’t take a lot of effort mind you, since it barely lasts over 1 minute in the Arcade mode, but slashing the Pomegranate in the end can get a bit tricky. Yes, you guessed it right, based on how you perform on the Pomegranate at the end of the round, depends on how much points you accumulate. Compared to the exercise to the index finger with the iOS version of the game, the Kinect version gives your arm a good workout.

Let’s be honest, you won’t be able to play more than 3 rounds when you begin unless you are really fit, because exerting so much on the Pomegranate at the end can zap away all your energy, but it is very satisfying when you have that ‘perfect’ round. It doesn’t take a lot of skill, because you can slice most of the fruits easily, it does get a bit tricky when you have to avoid the purple bombs that ruin your overall score, though. This is the advantage the iOS version has over the Kinect one, because avoiding bombs there is really easy. 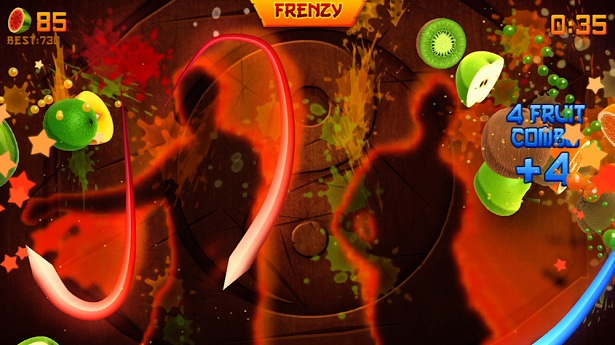 There are a lot of modes in the game. Arcade mode, Zen mode, Classic mode and challenge modes. There are local two player options available, which makes it a lot of fun playing with a friend side-by-side. The core gameplay of most these modes are same, and just have various little twists that isn’t that hard to understand. The basic premise of the game is slashing fruits and gathering as much points as possible and boy, it’s a lot of fun.

The game is priced at 800MSP, which can be a lot when you consider it is an iOS port, but considering the quality of the software on offer and optimized really well for the Kinect, it is a good value for money. The game will give your arm a good workout and keep your glued to the screen especially when you compete with your friends over scores.

Final Verdict:
SUPERB
The game is a lot of fun, although, slightly expensive for what it offers. If you have a few friends over, it can be a blast to play.
A copy of this game was provided by Developer/Publisher/Distributor/PR Agency for review purposes. Click here to know more about our Reviews Policy.