Galak-Z: The Dimensional Interview – A Modern Halo And Far Cry 3 Mixed In A 2D Shell

Jake Kazdal, CEO and creative director of 17-BIT, gives us the lowdown on Galak-Z: The Dimensional.

One look at Galak-Z: The Dimensional confirms that this isn’t your typical 2D arcade shooter. Developed by 17-BIT, which also brought us Skulls of the Shogun, Galak-Z aims to be a physics-based title which embodies the combat of Halo and Far Cry 3. Ambitious, for sure, but when you consider that it’s making its way to the PlayStation 4 as well as PC, it’s definitely worth taking a closer look at. Especially when you consider that there’s so much we have yet to know about the game.

GamingBolt had a chance to speak to CEO and creative director Jake Kazdal about the game including overall development, gameplay mechanics, its release on the PS4 and much more.

Ravi Sinha: Galak-Z is considered as “modern Halo and Far Cry 3 combat in a 2D shell”, taking a more physics based approach to the typical shooter. Compared to the shoot ‘em ups we usually see, what will be the main challenge gamers will encounter?

Jake Kazdal: The combat at a glance looks like a classic arcade space shooter, but upon spending just a bit of time with it you’ll see its much closer to something like Halo or Far Cry, played from above with pitch-perfect 2D controls. A large part of combat is maneuvering, it looks like the bullet hell games of old, but this time you are actually using physics-based thrust controls to sidestep, boost forward and backwards, and juke roll over lines of incoming enemy fire and obstacles.

The A.I has eyes and ears, and will communicate with their squad members your position, try to flank you, send for backup, rush off to let their shields recharge before re-engaging in combat, and generally act like real, tiny pilots in this procedurally generated space landscape. 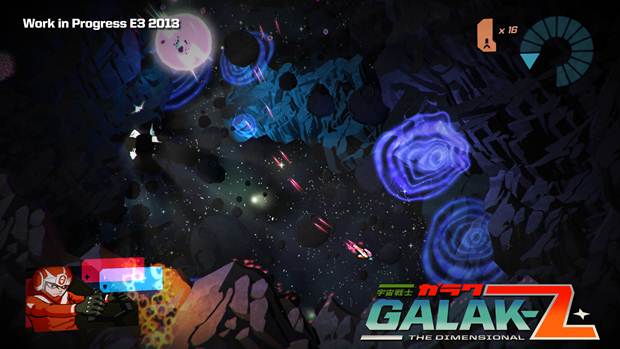 "At my core, I am a dedicated action gamer. I love fast paced turn based strategy like Advance Wars and Shining Force, so those were the inspirations for Skulls of the Shogun, but most of my game collection is adventure and action games."

Ravi Sinha: After Skulls of the Shogun, what prompted you to create a shooter, especially one reliant on physics?

Jake Kazdal: At my core, I am a dedicated action gamer. I love fast paced turn based strategy like Advance Wars and Shining Force, so those were the inspirations for Skulls of the Shogun, but most of my game collection is adventure and action games. I grew up playing games in Arcades, and a ton of NES and SNES, so that’s where my heart is. Galak-Z is a love letter to the classic action/adventure arcade games of my youth, but mixing in cutting edge physics simulation and artificial intelligence. I remember playing the original R-Type as Galak-Z was getting started and thinking “What would this game be like if each of those enemies actually had orders, personality types, an agenda, and intelligence? How amazing would that experience be?”

I’ve also always been in love with physics based gameplay, especially in a very clean 2D environment. There is such a depth, a richness to the encounters, and such a lovely learning curve. I think its honestly a big part of the success of Angry Birds, as well as classics like Asteroids and others like it. It takes a while to master, but it just FEELS so good, and once you are good at it, just maneuvering is such a joy…it adds so much to the experience. A big part of this game’s inspiration comes from the NES classic Solar Jetman, which was all about the physics based maneuvering a ship through space caves.

Ravi Sinha: Will Galak-Z have any co-op or multiplayer options?

Jake Kazdal: Most likely, we’re experimenting with those aspects right now, and have some very fun ideas of how to proceed.

Ravi Sinha: With regards to the weapons, what kind of selection can we look forward to?

Jake Kazdal: Customizing and upgrading your ship will be a large part of Galak-Z. The spectrum of what is possible is pretty fantastic, we’re looking forward to people getting their hands on it! 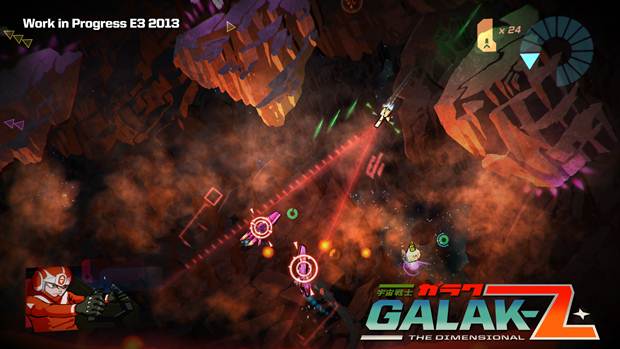 "Sony has been very proactive about securing amazing indie talent, and it's a huge part of their push for PS4. They confirmed Unity support for PS4 long before Microsoft did, so we approached them first, and it's just been fantastic ever since, no looking back."

Ravi Sinha: Will there be alternatives to using targeting weapons?

Jake Kazdal: There is much more coming, which we’ll be talking about more in the future!

Ravi Sinha: What can you tell us about Galak-Z’s art style? It seems to take a slightly cel-
shaded approach to environments and proceedings.

Jake Kazdal: Galak-Z is heavily visually inspired by the classic spaceship anime of the late 70’s and particularly early 80’s. Macross/Robotech and Yamato/StarBlazers in particular. The stylized explosions, burning lasers, and blue-skinned bad guys! Giant space battles and exploration of deep dark space caves full of weird plant and insect life…good stuff! A rich tapestry to draw from, and we’re hoping to really appeal to people who grew up watching that stuff, as well as younger audiences.

Ravi Sinha: Why is Galak-Z releasing for the PS4 and PC but not for Xbox One? How did you decide on the PS4 as your key platform?

Jake Kazdal: Sony has been very proactive about securing amazing indie talent, and it’s a huge part of their push for PS4. They confirmed Unity support for PS4 long before Microsoft did, so we approached them first, and it’s just been fantastic ever since, no looking back. 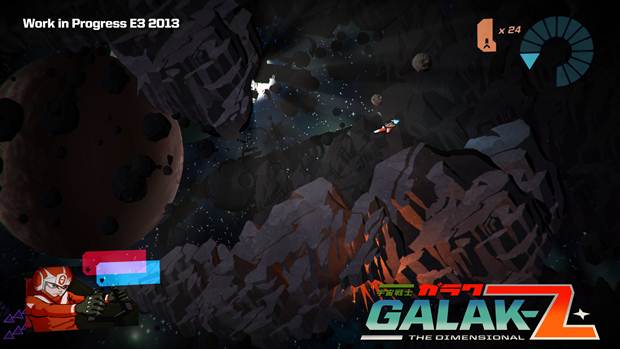 "Right now our relationship with Sony is going very well, it's probably too early to say just yet, but I assume we'll continue with them for our future projects. We don't have anything planned for Xbox at this time."

Ravi Sinha: In recent months especially given the success of the Xbox One and a revamp of Microsoft’s policies with ID@Xbox would you consider ever developing for the console in the near future?

Jake Kazdal: Right now our relationship with Sony is going very well, it’s probably too early to say just yet, but I assume we’ll continue with them for our future projects. We don’t have anything planned for Xbox at this time.

Ravi Sinha: What feature of the PS4 has you most excited? What are your thoughts on features such as Gaikai and backwards compatibility which are still to be revealed?

Jake Kazdal: Honestly I love many things about it, the controller is amazing, the great portfolio of indie games that’s coming, and the community features, particularly in something as dynamic and alive as Galak-Z, I can’t wait to see all the crazy encounters people post videos of online!

Ravi Sinha: Will Galak-Z be aiming for 1080p resolution and 60 fps as most games seem wont to achieve these days?

Jake Kazdal: Most likely. We’re actually asking a lot of the hardware as it is, but I love 60fps games!

Ravi Sinha: How will Galak-Z take advantage of the DualShock 4 controller’s features such as the touch pad? Will the touchpad help in any way when it comes to controlling your ship or targeting enemies?

Jake Kazdal: We actually haven’t spent any time on that yet, we’re working on perfecting other game systems right now and haven’t done a specific PS4 pass yet.