Rouge without a squadron.

The value of the rougelike genre is in being able to expect the unexpected. New layouts pose new challenges and remove muscle memory from the equation. The idea is to emphasize mechanics over memory and promote mastery of them to progress. Galak-Z wants to put the rouge into the shooter, though it succeeds in different places and different ways.

As the curtain rises, we follow rookie pilot A-Tak who just commandeered the titular fighter ship in a desperate bid to escape the empire. He quickly joins up with a tattered resistance and its leader, Beam. It’s just as trite as it sounds, and the randomness of the rougelike never gives these characters an opportunity to evolve. A-Tak is going to be just as much the picture of the cocky archtype at the end of the episodes as he was when you first turn the game on, and none of the handful of other characters are much better. 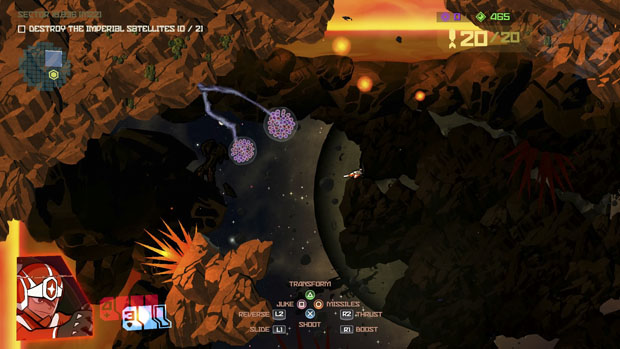 "This isn’t Geometry Wars here, and Galak-Z is crafted to make sure you look before you leap in."

The game separates itself into seasons, with four currently out and at least a fifth season on the way, with five randomly generated stages to a season. The plot of these is basic, and pointless; Meaningless fluff to give context to the objective, which is the only thing that varies. At least the moment to moment gameplay is exciting enough to drive players forward.

Galak-Z uses a control scheme that seems odd at first, relying on thrusters to maneuver over simple control stick manipulation. This choice has a learning curve like a brick wall, and I banged against it again and again until the intended, methodical pace of the game clicked. This isn’t Geometry Wars here, and Galak-Z is crafted to make sure you look before you leap in.

The floaty nature of the controls gives unmistakable impression that you’re in space and demands that even the act of stopping be deliberate. It’s borderline infuriating at first, but once you learn that flailing around and firing aimlessly isn’t going to get you anywhere but dead, the control precision works to the game’s favour. Though whether there wasn’t another way is up to interpretation. 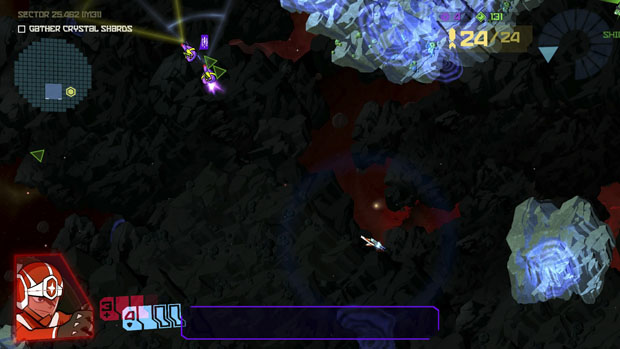 "Creating both an elaborate sense of weight to your actions, and when they don’t work out, a crushing sense of defeat that games in the genre tend to be unable to afford."

The thruster based system gives you just as much opportunity to back out of a bad situation as you had getting into it, and once upgrades are found, the ability to circle strafe around foes, dodge shots and launch missiles to take on tougher foes. Subtle visual markers show offscreen enemy positions and the noise you make, keeping the field of view clear and suggesting light stealth elements, particularly when in a tight spot.

The rougelike structure reveals itself in just how relentlessly punishing death is. It enjoys creating both an elaborate sense of weight to your actions, and a crushing sense of defeat when they don’t work out, A feeling that Rougelikes can’t usually afford.. The game is split up into a number of seasons, with five episodes to it. Should you fail at any point within a season, you’re back to square one, with any upgrades you found along the way gone as well.

That doesn’t always mean starting from nothing though. If you find blueprints during a run, they’ll permanently live in the shop from that point on instead of needing to luck upon the upgrade in the field, and the game has a secondary currency in the form of ‘Crash Coins’ to be found in deep crevices in the stages or dropped by enemies and can be turned in for salvage at the beginning of each new attempt or season, letting you purchase any upgrades you might have the blueprints for. With five of them in hand however, you can save yourself the headache of replaying the whole season and restart a failed mission, though you’ll also have to track down all your acquired upgrades in a special crate floating somewhere in the level for the privilege. 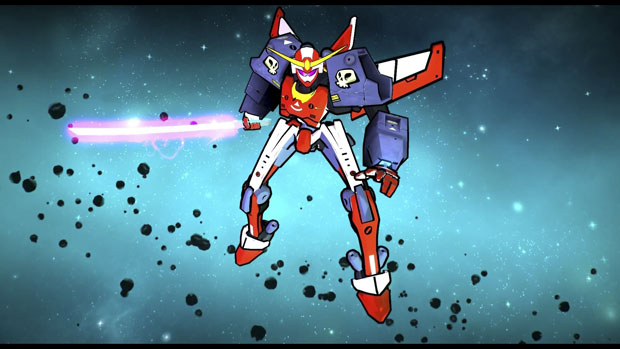 "The mech form is an extra layer on the already nuanced combat, as well as just fun to control. "

The strategy of the game is elevated after clearing the first season, which beat the basic fighter style of play into you before introducing the gundam style robot transformation. The mech form is an extra layer on the already nuanced combat, as well as just fun to control.

Maneuvering it is much the same as the fighter, though it focuses on higher power melee combat and grappling as opposed to the firefighting you learned previously. It’s another way to tackle the further episodes in the game where they throw a few further enemy types at you, but the game from then on barely evolves. Instead of just going to an objective and shooting it, maybe you need to carry it out with the mech.

The Saturday morning anime vibe is carried by the presentation, sitting somewhere between Borderlands and Velocity 2X. The characters don’t look so much hand drawn as they do flash animated, and it occasionally looks strange in the occasional scene where faces besides A-Tak’s are shown. Gameplay is butter smooth though and it’s simple to identify elements around you, even if many of the asteroid cave systems look similar to each other from one mission to the next. This is paired with some background techno beats and atmospheric droning that is neither consequential nor memorable. 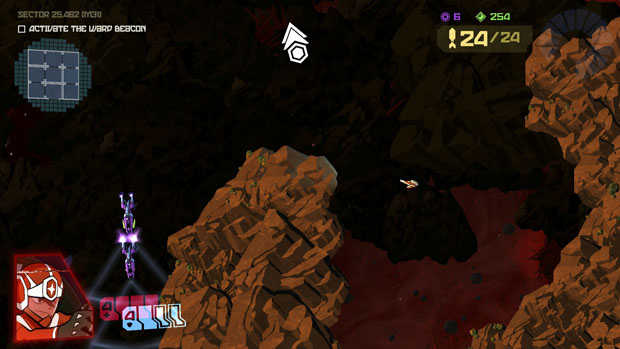 "I’m not sure Galak-Z benefits in any real way from its appropriation of the rougelike genre."

Galak-Z is an intentionally designed, thought out, soul beating take on a genre that, while it could honestly use some branching out, I’m not sure Galak-Z benefits in any real way from its appropriation of the rougelike genre. It has some moments where it can be a lot of fun, but it has more moments of pure frustration that just discouraged me from playing further. Fans of the genre might find a ton of enjoyment here, but most might rather bug out.

Galak-Z has a distinct visual style and an uncompromising, unforgiving gameplay style to match. There is a lot of depth for those who stick it out.

The sharp learning curve might turn players off before it ever gets good, and you'll either be in on the joke for the cartoon characters, or you'll find them grating.

Galak-Z is a fun take on the rouge like, and as punishing as they come. Maybe you like that, maybe you don't. Stick with in and Galak-Z will reward you, but it sure isn't going to make it easy.

A copy of this game was provided by developer/publisher for review purposes. Click here to know more about our Reviews Policy.
Tagged With: 17-Bit, Galak-Z: The Dimensional, ps4