GameStop Germany has posted listings for Beyond Good & Evil 2 and a new Batman game online, with both games listed as arriving on the Xbox One and PS4. And before you get all skeptical, remember that this same site listed Tomb Raider: Definitive Edition for next gen consoles before it was officially revealed. 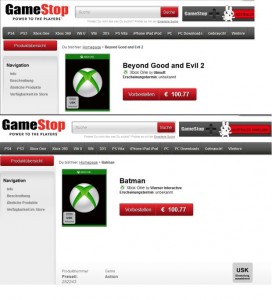 It wouldn’t be far-fetched to expect a new Batman game – it’s often been reported on and off that Rocksteady Studios is busy with the next game in Arkham series (Arkham Origins was handled by Warner Bros. Montreal). But even if it’s announced some time this year, it may be a stretch to expect it earlier than 2015.

As for Beyond Good & Evil 2, the game has been in constant flux since its initial announcement way back when. Creator Michel Ancel has confirmed that it’s alive though but it’s been a long time since we’ve seen or heard anything new regarding it.

What do you make of the above? Let us know in the comments.