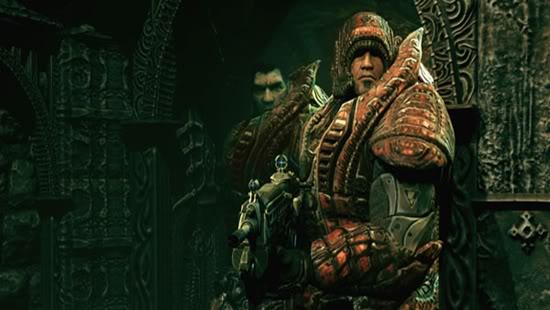 Over 5 million gamers have battled the Locust Horde in Gears of War 2 since its launch last fall. To commemorate the milestone, Microsoft Game Studios and Epic Games are unleashing Gears of War 2: All Fronts Collection, a compilation combining all previous Gears 2 game add-ons with seven all-new multiplayer maps and brand new campaign content. The collection hits retailers on July 28.

GEARS OF WAR 2: ALL FRONTS COLLECTION

The All Fronts Collection is a formidable mountain of Gears 2 content. Containing all of the Gears 2 map packs released to date?the Flashback Map Pack, Combustible Map Pack, and Snowblind Map Pack?All Fronts features the debut of Gears of War 2: Dark Corners, a collection of seven multiplayer maps and a never-before-seen deleted campaign chapter titled ?Road to Ruin.? In this deleted scene, Marcus and Dom return to the Locust Hollow in an action-packed encounter that can be played guns blazing or silent and stealthy.

A few quick notes on the seven new multiplayer maps in the Dark Corners pack:

Allfathers Garden: Don?t get caught up in the beauty?the sacred grounds of the Coalition founders can be a tremendously deadly place. Powerful weapons catalyze fast and furious action at this COG landmark.

Memorial: It?s all about the heavy weaponry in Memorial, set near the Eternal Flame at the Tomb of the Unknowns. Take a moment to remember your fallen comrades before using your flanking and evasive skills to take control of the Boomshot and the battle.

Sanctuary: Tight paths, blind corners, and an arsenal of weapons?the Locust-ravaged temple in Sanctuary is no longer the haven of reflection and remembrance it once was.

War Machine: In this abandoned train station, players need to master the Longshot, Mulcher, and Boomshot to advance the fight while evading fire from the platforms above.

Highway: Take the fight deep into the Locust Hollow in the complex passages of this underground highway system. Stick together, separate the enemy, and have an exit strategy ready, or it?ll be a one-way trip.

Way Station: In the limbo between death and ?processing,? you’ll find Locust way stations like this one, filled with COG soldiers. Tread lightly and practice patience?it?s best to sacrifice firepower for stealth while navigating this minefield of hidden grenades.

Nowhere: Set in the middle of the desert, Nowhere is exactly how it sounds: barren and devoid of life. The open air and long lines of sight prove useful for Longshot devotees, but expect some fierce, close combat in the stairwell.

Also included are an introduction to ?Road to Ruin? from Epic Games design director Cliff Bleszinski, a custom Xbox LIVE theme, and a collectible Gears of War 2 poster and strategy guide. An incredible package valued over 3,600 Microsoft Points, available at retailers on July 28 for just $19.99.

For those of you already rocking the previously released Gears 2 map packs, Gears of War 2: Dark Corners will also be available for individual purchase and download from the Xbox LIVE Marketplace for 1,600 Microsoft Points.