So many shapes and flashing lights. I like it. 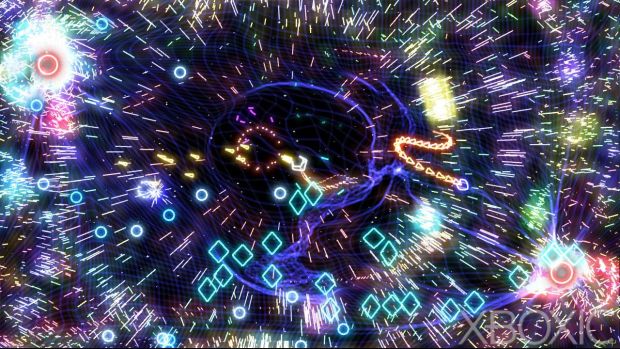 Geometry Wars 3, every epileptic persons worst possible nightmare, is on its way to PlayStation 3, PlayStation 4, Xbox 360 and Xbox One. It’s nearly here too with the game set to arrive on PC on the 25th of this month with all other platforms coming on the 26th.

Well the day one Pre-order DLC for players on Steam (pre-order costs £11.99) comes in the form of two bonus stages. There’s The Secret Eye and the Blood Count, Triangular and Doughnut shaped respectively. Xbox One Pre-orders cost £13.99 and that will net you the Blood Count for free too. Xbox 360 gamers aren’t actually getting a Pre-order bonus, but the DLC will be made available to them some time between the 26th of November and 2nd of December.

Though Xbox 360 and Xbox One copes of the game get the TITAN BOX for free, an Xbox Green coloured cube. PS3 and PS4 copies can only be Pre-ordered in North America meaning that only north American players can get the Secret Eye level. They also get the Symbolic Level that has enemies spawning from shapes based on the face buttons of a PlayStation controller.