Get Even is a frustrating game. Not because of anything to do with the mechanics, presentation or concept, because those all range from serviceable to really very intriguing. Get Even is frustrating to me because it’s a good enough game with a really solid concept that sets off the best thriller I’ve seen in a game in a long time, and then proceeds to squander it all.

Without reservation, the strongest element of Get Even is the story. You are Cole Black, and the only thing you know at the outset is that you’re going to rescue a female hostage and are warned not to follow through. You have your cell phone with a handful of apps to help you navigate, view heat signatures, spot cleaned away blood and scan evidence, as well as a silent pistol and a unique rifle I’ll touch on more in a moment, giving you a taste of the kind of trained killer that Black might be. The rescue goes sideways, and following that you’re suddenly in a completely new environment and onto a new unknown factor. 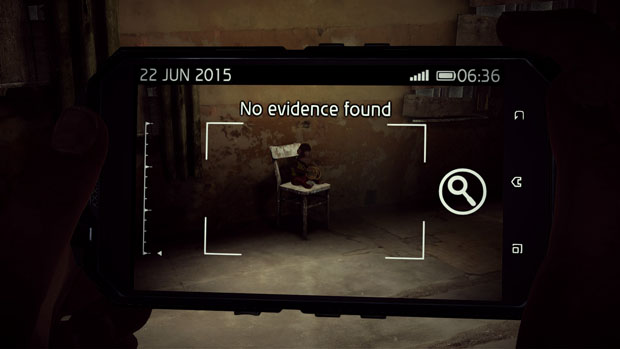 "Even when outside of the confines of a memory, some fantastic musical backing, sound design and changing environmental details create very real feelings of unease and trepidation."

Ruining as few details as possible, the setup and structure of Get Even is most immediately evocative of PS1 classic, LSD: Dream Emulator. Black was not living those moments as you were playing them, rather they were being run back to him by the Pandora unit. This sci-fi Occulus like headset can viscerally bring people into memories – their own or others’, to be relived. Eventually you are pulled from reliving those pivotal moments to the reality of the Saw-esque, dilapidated psychiatric hospital run by the mysterious Red. The doctor is slow to reveal too much, except for two things. He created the Pandora Unit and Black is supposedly here of his own will, to discover the truth about the girl.

Perspective is the strength of the story, and often it’s not clear whether Black, or his recollection, can entirely be trusted. Memories can twist over themselves and start to glitch out if you don’t stick completely to script, or sections that the brain has glossed over become hugely abstract. Even when outside of the confines of a memory, some fantastic musical backing, sound design and changing environmental details create very real feelings of unease and trepidation. It never actually trips into Silent Hill territory or moves past thriller territory into horror country, but the audio has the kind of polish that gets into your head regardless.

I briefly mentioned the phone earlier, and one of its many functions is scanning disparate pieces of evidence that Black can uncover or naturally finds through exploring his environment. A short way into the game you gain access to an investigation room that both serves as the literal, tropey cork board web of evidence as well as a hub to revisit past stages to search for what you missed the first time. This is where I felt the plot of Get Even is let down a lot by its chosen linear structure. 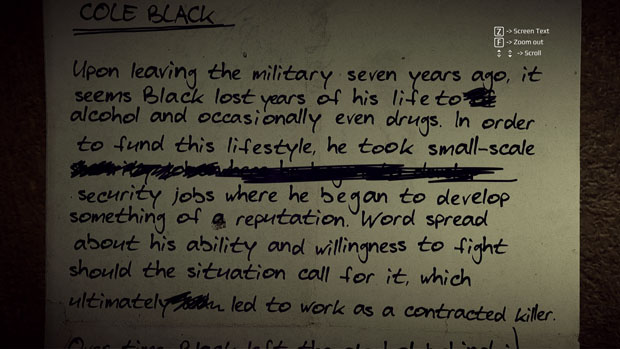 "The story that they do tell is fine enough, and the twist towards the end is great, but it would be just as great of a movie with little adaption."

The story that they do tell is fine enough, and the twist towards the end is great, but it would be just as great of a movie with little adaption. Black is shuttled from memory to memory and Red helps clarify the major events of the memories as you go through them. However, given the amazing effort gone into the atmosphere, it’s not a huge stretch to see Get Even break away from the hand holding.

If Get Even had the bravery to let off the leash even to a degree, allow the players to use that investigation room to put those pieces together themselves and come to their own conclusions or create theories as they go, the game could easily have elevated itself to the cult status enjoyed by games like Zero Escape, The Witness or Dark Souls. The structure and narrative are there for it, and what is there shows me that this is a team that would really be able to pull it off.

While the plot and presentation surrounding it are by far the most exciting thing to talk about for Get Even, the rest really can be summarized as business as usual, unfortunately. Black has many cool uses for his phone that assist in solving puzzles, but they stop as basic puzzles like turning off all the heated valves to stop steam erupting from a pipe or tracking a wire back to the fuse box. The occasional shooting almost always happens as you would expect it to, with a focus on stealth thanks to the one unique idea in the combat, the corner gun. 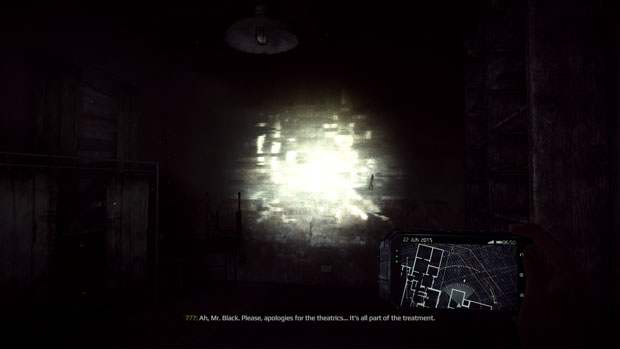 "Between your map and the corner gun, you’re almost over aware of your environment."

The Corner gun allows you to pivot a firearm 90 degrees to either side, suggesting a stealth approach to every encounter. Between your map and the corner gun, you’re almost over aware of your environment. It’s less a matter of the usual peek-a-boo game that most shooters are playing these days, and more figuring out the puzzle in how to take out the enemy without alerting them to your presence. Failing just reverts to the box standard cover shooting so it’s not crippling to fail it, but it does sting to lose the one interesting gameplay tidbit in Get Even.

There is something to love about Get Even, and in fact it’s easy to see where it could have moved past just being good and launched into being great, which is a shame to see. The team clearly has talent and whether or not you feel like settling the score, Get Even shows a fantastic premise and realized concept that I would love to see expanded on in the future.

Get Even has a fantastic grasp on how to nail a thriller and playing through the memories of Cole Black is an unsettling, trippy experience largely thanks to fantastic sound design and some abstract level concepts.

The linear nature of the game stymies its potential, and mechanically humdrum and basic puzzles and shooting barely offer distractions along the way.

Final Verdict:
GOOD
Get Even is the core of a fantastic, provocative game that has the potential to be the kind of experience that only games could do, but that core gets rather frustratingly lost within decisions that would better fit within a box standard shooter that impudently goes after Call of Duty’s crown. This is a game and a team with potential, but with Get Even, you’re only getting a glimmer of that.
A copy of this game was provided by Developer/Publisher/Distributor/PR Agency for review purposes. Click here to know more about our Reviews Policy.