Ghostbusters: Sanctum of Slime is a top down twin-stick shooter released as an arcade title for Xbox Live Arcade, Playstation Network and PC.  Now the game is not all that bad, but it is far from what I expected after playing Ghostbusters: The Video Game which was tons of fun.  While both games were published by Atari, the Retail game was developed by Terminal Reality while the Sanctum of Slime arcade game was developed by Behavior Santiago… every hear of them? Me either and I believe they were previously known as Wanako Games, with them developing the Assault Heroes game, which is why I don’t understand where they went wrong making Ghostbusters: Sanctum of Slime.  With such a simple game mechanic, the game could have been done a lot better but that is not to say the game is horrible, I just expected a lot more.

Let’s start off with the story as when you play the game in single player, you get comic strip like cut scenes with speech bubbles that without the right TV you are going to have a hard time reading.  Those are just in between levels those as while playing the game different characters will say thing, but once again, through a speech bubble that you must press the action button the get rid of them or see the next comment from a character.  So there is a large disappointment there with no verbal dialogue whatsoever, which is one of the things that really added to making Ghostbusters: The Video Game so good.  Speaking of character dialogue, it was much to my surprise that the whole cast of Ghostbusters were all new characters and made  up just for the game.  This was another disappointment especially for anyone who is a fan of the films or just the retail game developed by Terminal Reality.  So with all these issues combined, I felt myself drifting away when it came to paying attention to the story of the game, which there is not much there to begin with.  It is more of one liners and the developers trying to mimic the bond that the original cast adding not so funny jokes.  There are ECTO-1 chase levels which I was happy to see in the game but, the game had potential that just was not fulfilled. 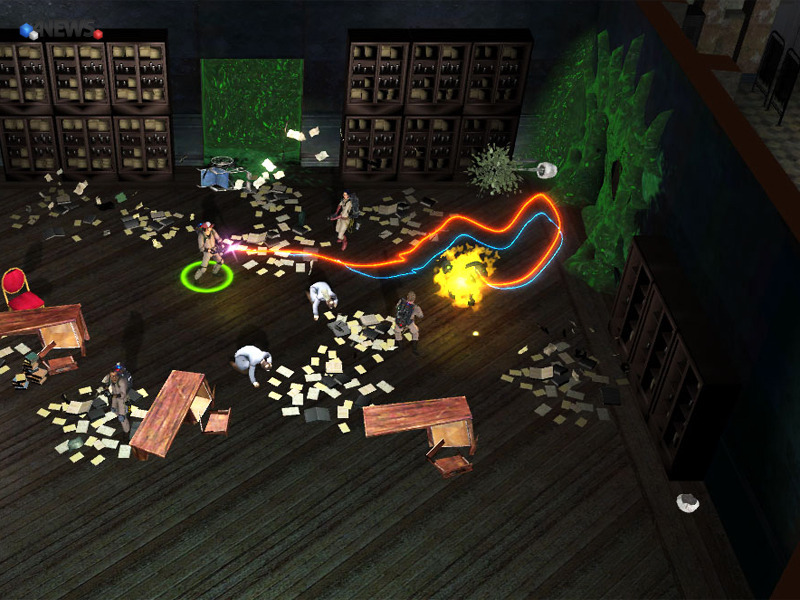 Ghostbusters: Sanctum of Slime did not quite live up to its potential.

Now the game has 4 player online co-op, and how could you go wrong with that right?  Well you can actually, while the game fist off has no drop in/drop out co-op aspect it doesn’t end there.  You see the game is actually a lot of fun playing with 3 other friends trapping ghosts and beating bosses.  It is all fun and glorious until the game gets so difficult it becomes nearly impossible to beat.  I tried playing it single player the AI suddenly turns from semi competent players to suicide runners.  They will knowingly try to pick you up even though there are more than enough enemies to kill them.  I gave up trying to beat the game in single player and completed the game online with 3 other people which was still, much harder than a game like this should be.  On top of the fact that you can’t view the comic book like cut scenes in co-op for some strange reason.

There are only three weapons available and they are color coated to the enemies.  If the enemy is blue you must use your blue gun to kill it most effectively.  They same goes for your standard proton pack to kill red enemies and you yellow wave blast for the yellow enemies.  That is all of it when it comes down to weapons and enemies.  This is far from a good Ghostbusters game but it can be fun at times, especially playing co-op, but the bottom line is that the game is a disappointment compared to where the developers could have taken the game.  The game will run you 800 Microsoft Points or around $10 bucks, which just is not worth it.  That $10 could be spent elsewhere and you would get a lot more out it.  The game consists of 12 levels and if it was not so hard it could be beaten in an hour or two.  If you are looking for an authentic Ghosbusters game, look elsewhere, but if you are looking for a bit of mediocre fun with your friends then test out the trial of the game.  The might even be worth it for half the asking price, but if it were up to me I would keep this game out of the Ghostbuster franchise.

4 player co-op. 12 levels and some include ECTO-1 chase levels.

The game becomes overly difficult. Co-op play has no drop-in/drop-out and you cannot view cut scenes while in co-op.

Final Verdict:
MEDIOCRE
A Ghostbusters game that should be separate from the franchise as it does not do the franchise any justice with a different cast of characters and limited fun when it comes down to it. With 4 player co-op that had more potential then what was brought to the table.
A copy of this game was provided by Developer/Publisher/Distributor/PR Agency for review purposes. Click here to know more about our Reviews Policy.