Posted By Will Borger | On 27th, Oct. 2020 Under Article, Reviews | Follow This Author @will_borger

There’s a voice in your head. A whisper. They’re coming for you, the whisper says. He can help you, but only if you free him from his prison. They’ll be waiting for you. But you’re a Ghostrunner. The last Ghostrunner. And there aren’t enough of them to stop you.

So begins Ghostrunner, a collaboration between One More Level, Slipgate Ironworks, and 3D Realms. You are the titular Ghostrunner, a cybernetic assassin armed with a katana and a nasty case of amnesia. It seems you were thrown out of a tower recently, and you don’t really know who you are or what’s going on. The whisper in your head, known only as The Architect, however, knows exactly who you are, and he has big plans for you. Your goal is simple: climb to the top of Dharma Tower, the last refuge of humanity after the end of the world, and dispose of Mara, the tyrant who has usurped rule of the city. But nothing stays simple, and before long, the Ghostrunner finds himself in the middle of a much larger conflict – one he’ll have to navigate while figuring out who he is.

"Ghostrunner’s gimmick is simple: everything, including you, dies in one hit. The result is an absurdly fast-paced game where the difference between life and death is an eyelash and you’ve got to be quick to stay alive."

Ghostrunner’s story isn’t anything new, but it is surprisingly well told and acted. Better still, the game doesn’t force you to engage with it if you don’t want to. Almost everything plays out through radio communications between the Ghostrunner and the rest of the cast. How much attention to want to pay to what’s going on it up to you, but I found it a pretty engaging tale to listen to while I worked my way through Ghostrunner’s levels.

The action, of course, is why you’re here. Ghostrunner’s gimmick is simple: everything, including you, dies in one hit. The result is an absurdly fast-paced game where the difference between life and death is an eyelash and you’ve got to be quick to stay alive. If you stop moving in Ghostrunner, you’re probably dead. Thankfully, another try is just a button press away.

A Ghostrunner’s only weapon is their sword, but it doesn’t matter much when you’re this fast and maneuverable. Your Ghostrunner can do it all: run along walls, slide down ramps and under obstacles, deflect bullets with a well-timed sword swing, and use a quick dash to close distances or, if held in the air, slow time and change direction, allowing you to dodge bullets or avoid otherwise impassible obstacles. Ghostrunner’s movement feels incredible, and it’s easy to chain your tricks together to close the distance with an enemy before introducing him to the business end of your katana. 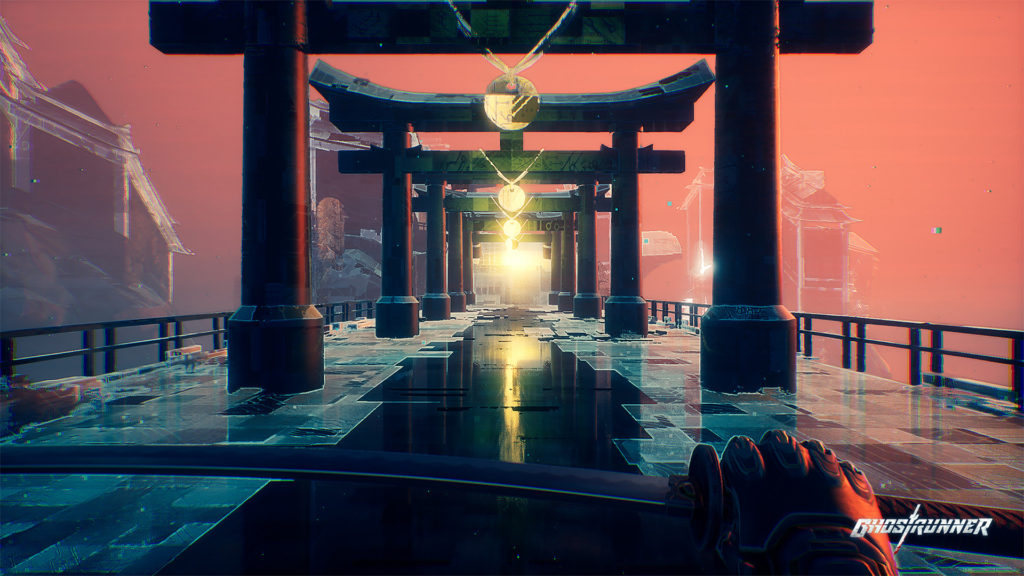 "Upgrades, which are earned automatically, take the form of tetris blocks that are based on a grid. The better the upgrade is, the bigger and more awkward the piece that represents it is. "

At first, those enemies will be basic mooks with single-shot pistols that take a second to charge before firing. Once, you’ve found your feet, however, Ghostrunner doesn’t waste time throwing other enemies at you. Some carry machine guns and you’ll have to keep moving to stay alive long enough to slice them up while reload, while others come with shields that you’ll have to get behind if you want to have a shot at them. Still more attack you physically, requiring a timed dodge or a parry to open them up before you slice them in two. Completing a combat encounter will require you to take out every enemy in the area without dying. It’s not always easy, but it feels incredible when you make the perfect run.

Your enemies aren’t the only ones leveling up. The Ghostrunner also gains several abilities as you play. The first, Blink, cuts straight through any enemies in front of you, so you can cover ground quickly while taking care of even the toughest enemies. Tempest reflects projectiles and blows enemies backwards, while Surge is an energy slash that can take out multiple enemies at once. Ghostrunner combines its abilities with a unique upgrade system. Upgrades, which are earned automatically, take the form of tetris blocks that are based on a grid. The better the upgrade is, the bigger and more awkward the piece that represents it is.

Getting the most out of Ghostrunner’s upgrades requires both prioritization and experimentation, but they’re more than worth it. One gave me an extra dash, while another gave me two Blinks as opposed to one, and yet another helped me find collectibles. The system makes optimizing your upgrades fun, but don’t worry if you don’t fill every slot. Unused spaces increased your Focus regeneration, the resource used for abilities like Blink and Tempest, which also recharge with every kill. 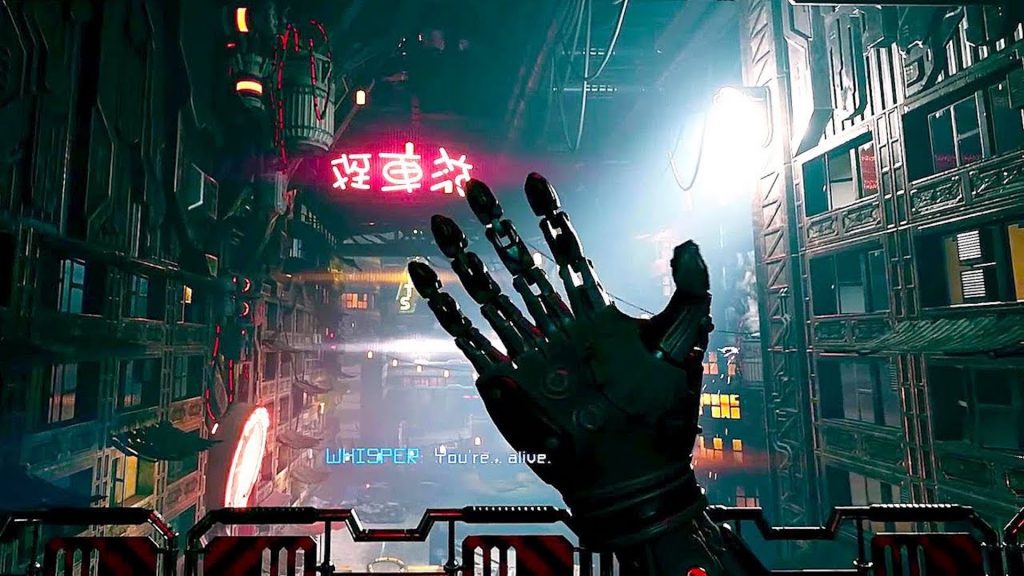 "At its best, the game combines its combat, platforming, and variety to make unique encounters that ask you to do everything."

You’ll spend your time between combat encounters navigating the environments, which generally involves a lot of platforming. Ghostrunner’s platforming sections are fairly linear, but they make up for it by forcing you to master your character abilities – wall running, sliding, dodging, etc – and keeping things fresh with powerups and unique challenges. Some, for instance, require you to hack objects, freezing them in place so you can get around them or climb them, while others force you to nail targets from a distance with shuriken to open a door and then running through it before it closes.

At its best, the game combines its combat, platforming, and variety to make unique encounters that ask you to do everything: blow up a shield generator protecting multiple enemies before using riding a rail high enough to jump on a flying robot and crashing it into a group of baddies before chopping up a couple more with Blink. When Ghostrunner is firing on all cylinders, and you’re playing well, you feel unstoppable. Each encounter is just as much a puzzle as it is a battle, requiring you to prioritize targets, make quick decisions, and scan for new threats as you keep moving. There are several different ways to approach just about every encounter, and the game rewards you for trying new things. Death may be frequent, but it is largely forgiving, especially when you get back into the action so quickly.

It’s ironic, then, that the game is often at its worst when it actually tries to do puzzles. These happen in Cybervoid, Ghostrunner’s equivalent of an interactive computer matrix. Some require you to rotate blocks, while another tasks you with collecting 13 items while traversing a rotating object. These parts remove what makes Ghostrunner so engaging – its movement and combat – and replace them with stuff that just isn’t interesting or doesn’t feel good. There are plenty of good moments in Cybervoid, but when I was faced with sections like these, I often wished the game would play to its strengths. 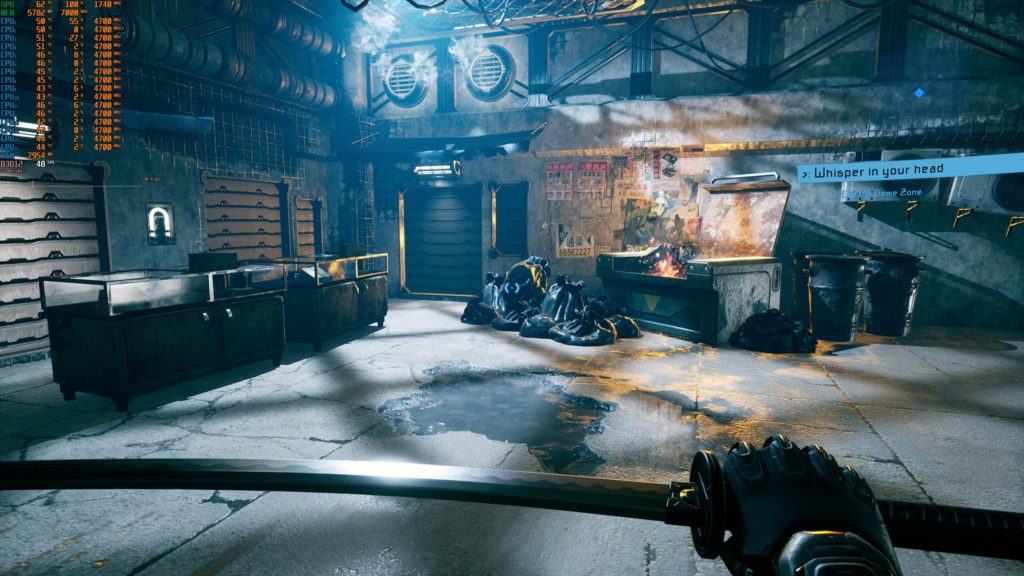 "Ghostrunner is an unforgiving game that requires nothing less than sustained periods of perfection to succeed. You’ll have to have quick reflexes and be able to adapt on the fly to progress."

As good as Ghostrunner is, its design can be a weakness. This is especially true during the game’s boss fights, which require you to execute at a high level in throughout the encounter. The game does give you checkpoints between phases, but you have to complete the entire thing in one go. If you decide to take a break, you’ll lose all of your progress. This is especially annoying if you’re stuck on a particular part. You’ll have to do the segment between the tricky bit and the checkpoint over and over again if you die, and it’s a bit irritating performing the same rote actions over and over to get to the past you want to attempt, only to immediately die and do it all over again.

Ghostrunner is pretty generous with its checkpoints in most levels, but having something you have to play through in a single-sitting if you don’t want to start all over can be infuriating, especially if you’re a ways in and just want to stop. That happened to me. Knowing from experience that quitting the level and taking a break would erase my progress, I kept going. I played until my hands hurt, and then I played some more. When I finally won, it felt incredible, but I was irritated that the game wouldn’t treat my progress the same way it would any other level, especially since the game’s boss fights are so clearly divided into multiple segments.

Ghostrunner is an unforgiving game that requires nothing less than sustained periods of perfection to succeed. You’ll have to have quick reflexes and be able to adapt on the fly to progress, and a single error means you’ll be doing whatever you just did over again. It’s not the hardest game I’ve ever played, but it can be an exceptionally frustrating one, especially if you get stuck, which will turn a lot of players off. 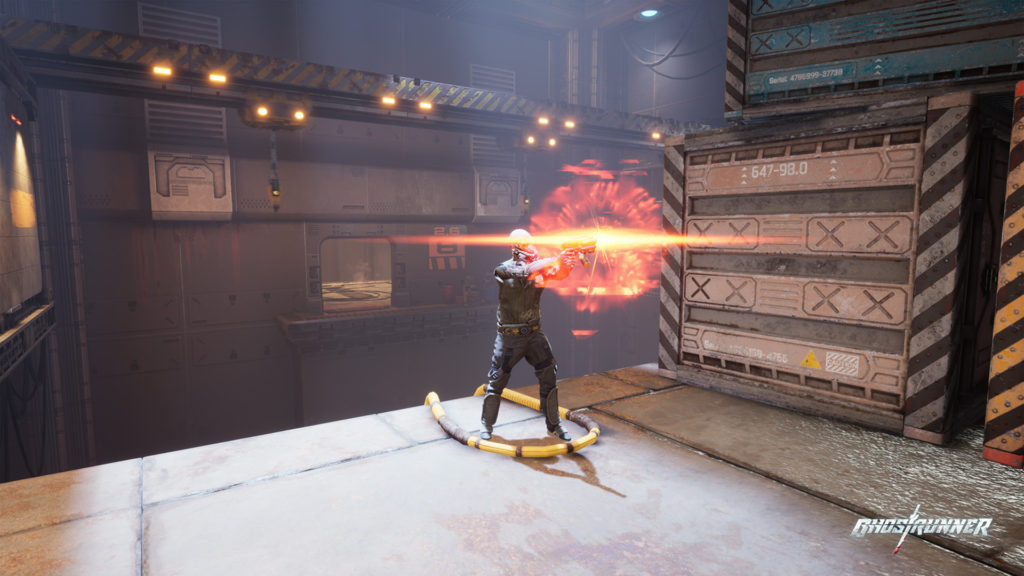 "whether you play it once or a thousand times, Ghostrunner has enough variety, confidence, and style to make any action fan happy."

That said, there’s still a whole lot to like here. This is a game that plays very, very well and its always introducing some new wrinkle to make these interesting. It’s also immaculately produced, Ghostrunner is absolutely gorgeous: ruined industrial areas are dirty and feel like real places designed for real things, while the city at the heart of Dharma Tower nails the neon-fused, grungy aesthetic that has been a cyberpunk staple since Blade Runner and Neuromancer.

The soundtrack, a synth-fueled fever dream, effortlessly enhances every aspect of the title, from the strange, shifting spaces of Cybervoid to the neon-drenched combat arenas of Dharma Tower’s residential area. It’s rare for a video game soundtrack to be so good that I want to listen to it outside the game, but Ghostrunner’s kept my head bobbing to the rhythm throughout, which is no small feat. The game runs well, too. I ran it on an RTX 2060 Super and an i5 6600k and nearly maxed every setting without seeing any dips in performance.

Ghostrunner isn’t a long game, but it doesn’t need to be. I’d imagine most players will finish it in around 6-8 hours, depending on their skill level, but this is a game that’s dying to be replayed. Despite its obvious influences, Ghostrunner feels unique. It can be frustrating at times, but Ghostrunner is game with an enormous amount of depth, and one that speedrunners will be testing themselves against for years. But whether you play it once or a thousand times, Ghostrunner has enough variety, confidence, and style to make any action fan happy. I wasn’t really sure what I was getting myself into the first time I set foot in Dharma Tower, but I do know one thing: I’ll definitely be coming back for more.

Some moments can be incredibly frustrating. No way to save checkpoints during boss encounters if you quit the level. Puzzle elements are a bit undercooked.

It can be frustrating, but Ghostrunner is an excellent game that combines fast-paced action combat with a compelling game world that any fan of action games or cyberpunk should enjoy.

A copy of this game was provided by developer/publisher for review purposes. Click here to know more about our Reviews Policy.
Tagged With: 3D Realms, Ghostrunner, One More Level, pc, ps4, Slipgate Ironworks, Xbox One