God of War: Ascension – Clash of The Gods

We check out the multiplayer component of God of War: Ascension

The beginning of God of War: Ascension charters the incarceration of our favourite bald serial killer (no, not you, Agent 47) during his pre-apocalypse-triggering days. During Kratos’ escape from prison, some poor meathead gets impaled during the chaos, “just another bit player”, you think, “another corpse, bobbing gently in a sea of corpses”.

Yet this character does have an important part to play. In the game’s multiplayer, that meathead is you. He’s like your own personal Olympian, albeit one that’s been disqualified for substance abuse. You can dress your meathead up in a variety of stylish armour, with all of them showing off a flash of sinewy leg. Ooh, matron!

Each piece of equipment changes the stats of your character so, if you’re like me, you’ll go for MASSIVE DAMAGE and no defense, because my focus is to kill them to death.

Or, if you are a bit more conservative, you can go for more defence, or maybe some magical power. 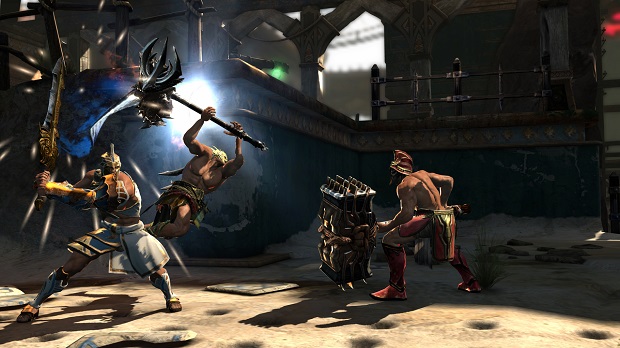 I just like to cleave ALL of the limbs off, as quickly as I can. Obviously, the god that you align yourself with initially will determine which area you should focus your attributes on. I plumped for Ares because slicey, slicey.

Your avatar has just escaped eternal imprisonment by dying. Cunning. He was incarcerated for breaking his oath with a god. So, once you’ve pledged fealty to one of the four gods, you can always break your oath again and plump for a different class. For example, you may want to get shocky with Zeus, get sneaky with Hades, or get… um… wet with Poseidon. There also seems to be an empty pedestal – DLC, anyone? Regardless of your choice, you can always change your mind later.

Each of the classes has a tangible difference in play style, mainly due to the tweaked statistics for each character class, but also because of the varying tools of death available to them. There are your usual suspects: hammers, swords, spears…etc. And there are also a few surprises, like dinner forks for ass attacks (read: tridents).

You unlock new equipment in battle, and you can also level your equipment up, making it more resilient once you’ve whet your blade sufficiently. You can also choose your allegiance-specific magic ability, which you unlock by gaining levels and you can also upgrade by spending skill points. The same can be done with your character items too, which focus on escaping from trouble.

And depending on which game mode you choose to jump into, you may be in constant trouble.

Firstly, there’s Favour of the Gods, which can be played in free-for-all, or as a team. In free-for-all, this is the most basic of game modes, with the sole objective being to out-stab the competition. The team version shakes things up by asking you to control specific choke points on the map, and most are covered with siege weapons, like a projectile based Ballista. A change of arena also throws in a couple of game-changing objectives, like stabbing a cyclops in his good eye for extra points.

This team mode is the meat of the multiplayer experience, with a plethora of traps and environmental dangers that you can use to your advantage. These stages are also quite sizeable, which is good because it’s hard to tell what’s going on when all eight players are in close proximity. 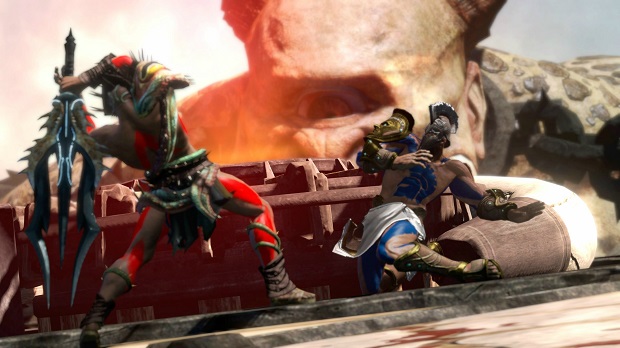 There’s also the obligatory Capture the Flag mode, in which you capture a flag.

Then, there’s the cooperative mode called Trial of The Gods, which you can play alone or with a singular ally. You take on waves of AI in this mode, with each kill extending the time limit.

The combat doesn’t work as well in the co-op mode. This is mainly because the timings for the strikes have been subtly tweaked, causing the the breaks between swings to be considerably different from that seen in the single-player campaign.

The combat, however, retains familiarity, whilst also managing to feel completely fresh, and perfectly suited to competitive multiplayer.

Light attacks are swift and effective, they will also always cancel an incoming power attack. The disadvantage of light attacks is that they can be blocked or parried. If your attack is parried, then you open a window for the enemy – a window… to your face.

It feels fantastic when you’re under a barrage of abuse and a perfectly timed parry sends multiple opponents reeling, allowing you to launch into a counter assault.

Power attacks have the advantage of breaking your enemy’s guard, and if you charge it up you can launch them, allowing you to perform a devastating juggle. You can then use the grapple to carry on your onslaught whilst your opponent is in a vulnerable position. Your adversaries are also open to grapple attacks when running or dodging.

Dodging is the only way to avoid a power attack and running is what you do when you’re a wimp. Joking aside, running can actually be a sound tactical decision, whether you notice an environmental advantage, weapon, or a health/mana pickup. Timing is everything.

There is also a physical attack, which is mainly used for kicking your assailant into the ether. The physical attack is swapped out for a secondary weapon when you pick one up. These are dotted around each map and they range from the mundane (hello, shield) to the magnificent (hello, Gorgon thing that turns my enemies to stone and lets me insta-kill them).

On top of this, there is a mixture of magical attacks, each giving an advantage in a specific situation. For example, one of the fire attacks sends your enemies flying backwards, which is handy for when you have a few antagonists with their backs up against a long fall. There is another that zooms you into the sky, coming back down with a thud. I mainly used this to allow faster, invulnerable movement when carrying the flag in CTF mode. There are many more magic abilities, and I’m sure you’ll find a perfect opportunity to annihilate the opposition with them. 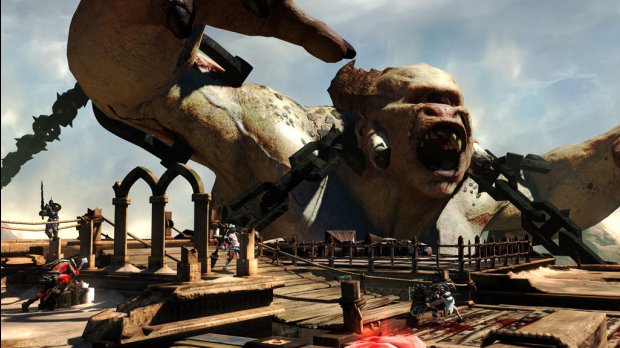 As well as magical abilities there are also items, which act as a way to break out of a brutal combination, allowing you to spring instantly into a counter assault.

As I said previously: timing is everything. It feels fantastic when you chain together a flawless string of moves, interspersed with parries and blocks. You really feel like you’re outsmarting your opponents in a game of deadly rock, paper, broadsword.

I wasn’t expecting much from the multiplayer mode in God of War. I mean, it’s cool to hate on tacked-on multiplayer modes, isn’t it. But I have to say, I really enjoyed this – heck, I still am enjoying it, and I would even go as far as to say that I enjoyed it more than the single-player offering.

The combat is slick and satisfying, and apart from the hammers having slightly too much physical force and knocking everyone out the arena on the smaller stages, the game feels perfectly balanced. In a world saturated by online shooters, stabbing the shit out of someone repeatedly feels fresh and unique. I know I’ll be experimenting with my loadouts until I find the perfect set up in the coming months.