God of War was released back in 2005 to critical acclaim and praise from gamers for its intense combat, gore, and epic boss battles. Kratos quickly became the synonymous icon for the PS2 and God of War became the flagship title. In 2007, two years deep into the next generation of consoles, God of War II released to similar praise from gamers and critics alike. It even managed to go toe to toe with many top releases in 2007 for Game of the Year, games like Bioshock, Call of Duty 4, Halo 3, and others which was an amazing feat for a PS2 game. Now with God of War III only a few months off Sony is building the buzz by releasing the God of War Collection which features both God of War and God of War II with re-mastered graphics and trophy support. 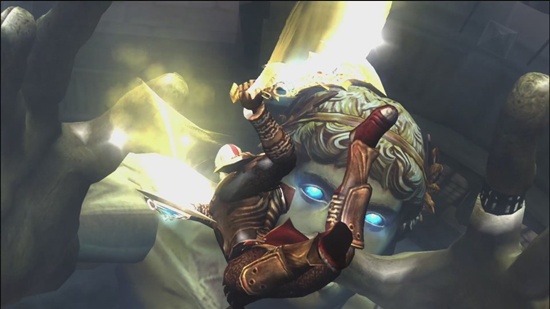 Juts when you thought this battle couldn’t get any better, they made it HD.

Now let’s get right to the graphics because that is the major draw of the collection. To say they look improved is as much of an understatement as saying Kratos is a badass. God of War looks far superior to its PS2 brother and God of War II looks on par with most mid range PS3 games. This will become very obvious when you see in engine cut scenes which are still rendered at the PS2’s 480i. Why they couldn’t polish up the in engine cut scenes I don’t know, but when you get back to gameplay you will see just how substantial the difference is. As an added bonus everything runs at a locked 60 frames per second meaning that there is no fear of any slowdown during the largest most epic battles.

Being that most of you by now have at least heard about the goings on of God of War will give only a brief synopsis of what it’s all about. You play as Kratos, servant of the gods of Olympus. You are tasked with killing Ares, the God of War. You spend the game searching for Pandora’s Box, the only means of gaining the power necessary to accomplish such a feat. Through your journey you will take part in some entertaining and thought provoking puzzles and engage in some of the most epic boss battles gaming has to offer. Epic is a word that will be thrown around a lot while playing or talking about God of War, but it is more than deserving of such a…well…epic adjective. 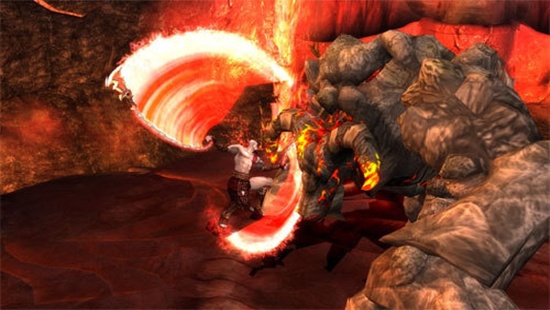 God of War and God of War 2 are still top of the line games.

Aside from trophy support and the flashy new graphics there is nothing here that you can’t get on the PS2 versions of the game. Those who own them and either have a PS2 or backwards compatible PS3 may not have much reason to upgrade unless they really want the new graphics or are looking for easy trophies, but who really doesn’t like improved graphics and trophies? For those who haven’t played the game though, this is the definitive version and the one you should own. The God War games hold up very well by today’s standards. They are better than most games released today, and you get both of them for $40. This collection is one of the best bargains you can get in gaming considering both retailed for $50 each as PS2 games.

God of War Collection will definitely build a lot of buzz in anticipation of God of War III, especially when it includes the demo which by the way is fantastic. Now is the time where we wonder if, after the success of God of War Collection, other high profile PS2 games will receive a similar treatment. I for one am hopeful of such an outcome and already have a list of game I’d like to be able to play in HD on my PS3. For now though, I’ll be busy fighting my way to the top of mount Olympus, blades in hand, awaiting the final outcome while replaying these two fantastic titles.

In engine cut scenes are still rendered at 480i. Updated graphics and trophies may not be worth upgrading for people who own a PS2 and these games or those who have a PS3 with backwards compatibility.

Final Verdict:
EDITOR’S CHOICE
God of War Collection is the best $40 you can spend on a game. You get two fantastic games that hold up better today than most new releases.
A copy of this game was provided by Developer/Publisher/Distributor/PR Agency for review purposes. Click here to know more about our Reviews Policy.