People say some specific games are given higher scores because the standards of the systems they have been released on are low, or because of the fact that the game did the best it could with limitations it faced within its genre. I say this- God of War: Ghost of Sparta gets a high score from us not because this is a great PSP game that we have been desperately looking for, or because it is better than the other PSP games which has low standards, but because it is simply one of the most thrilling, awe-striking and qualitative titles to have been released on any system in recent memory.

God of War: Chains of Olympus, the spectacular offshoot of the God of War franchise, the first GoW game to ever hit the PSP, was met with some negative feedback on the grounds that it felt a bit too compressed an experience for a God of War game and that it had no gameplay variation, and all you had to do was move forward and kill your enemies. Ghost of Sparta has exterminated that error thoroughly. You’ll have great looking, cinematic looking platforming sections, some puzzles to give the player some breathing space at regular intervals, and the most varied, fun and amazing combat we have ever seen in any God of War game. Gone are the days when one could complete an entire God of War gaming using just the Square, Square, Triangle combo. Now, you actually have to develop your moves, deal deathly combos that are as good to look at as they are to pull off. What gives this depth to this section of gameplay is the revolutionary new system we first saw in God of War III, Combat Rush. 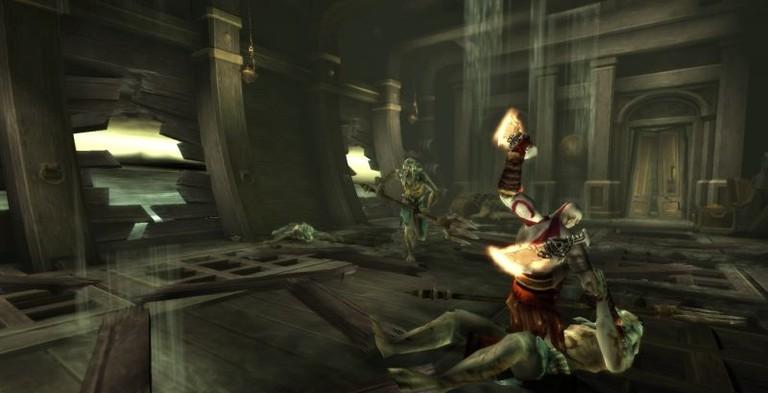 Take that, you SONUVABITCH!

Combat Rush, the ability to hurl your foes into the ground and then dealing deadly blows to them to pull of cool looking finishing moves, is possibly the best thing that GOWIII could have given us, and Ghost of Sparta carried it forward, and made great use of it. Combat Rush is what gives the game’s combat so much depth, basically, and makes it such that it never, ever gets repetitive.

What else keeps the game from getting boring and monotonous are the boss battles, which are placed at regular intervals, and are possibly some of the best boss battles one can come across in any action game. Each boss takes a measurable amount of time to take down, and each of them is equally fun to kill. My personal favourites were the first two boss battles of the game, being the Scylla and Erinys. Each one of them took a considerable amount of time to defeat, and also provided for some gorgeous spectacles in the background and nice variations to the gameplay, and some great looking context sensitive finishing moves.

Other than the boss battles and the extremely thrilling combat, what is so good is the visuals, which are possibly the high point of the game, and not only the best we have ever seen in any PSP game, but also some of the best that any game has featured in recent memory. The beautiful backdrops, the perpetually cascading rain and lava, the simply gargantuan set pieces and extremely detailed environment make this a graphical marvel, and raise the bar for future PSP and God of War games to come.

The part that truly showed how good games on the PSP can look was when after the end of the first boss battle, the volcano explodes. When we get out of the volcano, and try to escape the city, the exploding volcano and the raining ash and lava and the burning skyline of the city are always in the background, and not only do they add to the epic scope and sense of scale of the game, they also testify to the fact that Ghost of Sparta is indeed a beautiful looking game.

The character models are great, and Kratos looks exceptionally good, with blood on his body after battles and water pouring down on him when he is standing in the rain. The animations are also superior, and the particle effects are really, really good. 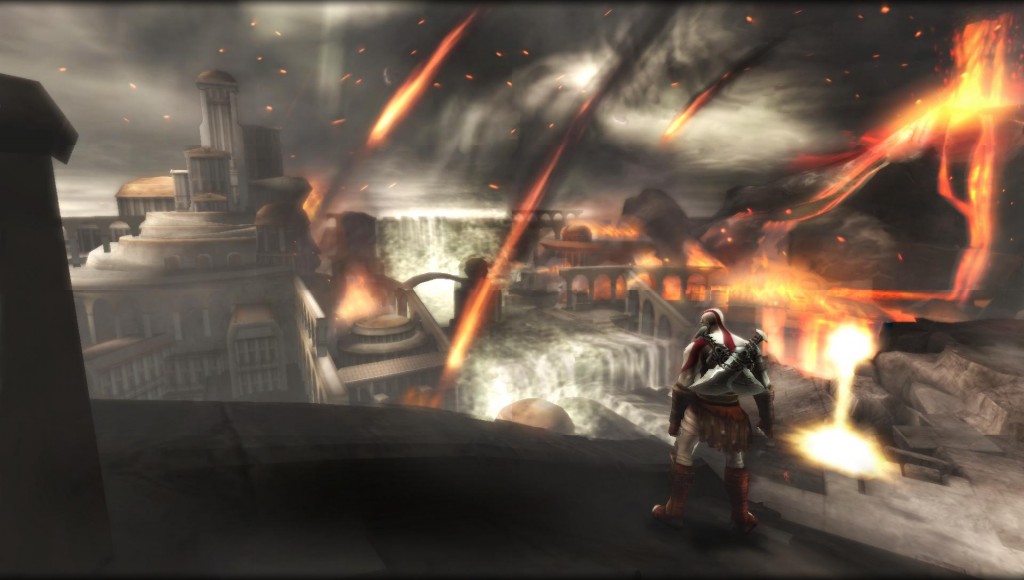 And yes, that brings me to the scale and scope of the game, which are simply unmatchable. Even moments in the second and third game, which are possibly the most epic games I have ever played, somehow fail to match up to the wonderful, awesome set pieces and cutscenes in this game which provide for a huge sense of scale, making this game so epic that it can put several Hollywood fantasy flicks to shame. Expect a lot of Lord of the Rings level epic moments, which will leave you with your mouth hanging open and awe-struck, and a numbed and boggled mind.

The soundtrack is as good as we have come to expect in a God of War game. Always there with the action and the cinematic cutscenes, the overuse of trumpets and drums and a very fantasy-flick like choir make the soundtrack one of the best ever. Again, I would like to draw a comparison to The Lord of the Rings, because LotR’s soundtrack is what GoS’ sound score is most like. However, if the game is played with headphones, oftentimes you’ll see that the sound is very unclear, very low and echoes a lot. So the game is best played without the use of headphones.

There are some errors with the graphical area as well. There were a few framerate drops here and there, and what was most baffling was that there was no action going on then, so I can look for no reason for these drops. And these were no mere stutters, the game hanged altogether for a few moments. Another very big flaw with the game is its length. I finished the game in four and a half hours, and that was after I had explored all the areas, collected innumerable orbs, did some backtracking and collected all the collectible items. This left me wanting more of the game, and was probably the only flaw from Chains of Olympus that was retained. 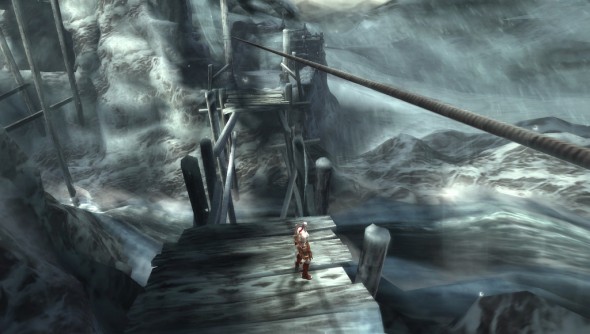 Look at me, I’m an angry Spartan. I’m gonna rip your head off.

However, Ghost of Sparta does a very good job of explaining why in the name of Zeus Kratos is so mad at the Olympians. When I first played God of War II, I always kept wondering- why the fu*k is he so pissed? God of War: Ghost of Sparta does a very thorough job of explaining that, also adding an emotional and humane touch to Kratos’ fu*ked up bastardly character. The story shed a great amount of light at Kratos’ past and his family, and how the Gods took from him more than just his soul and his life. It gives an emotional layer to the character, and you’ll often be sympathizing with him throughout your playthrough.

Ghost of Sparta opts for a God of War I style approach to storytelling, with flashbacks being triggered at regular intervals in the game, whenever Kratos sees something that reminds him of his past, while also featuring the awesome God of War II level cutscenes. It is a great mixture between the two, and a welcome return to the roots, not to mention an absolute treat for God of War fans. This has to be the best way of storytelling ever featured in this prestigious series.

However, the fact that Kratos is, throughout the game, the God of War, is completely disregarded. Throughout the game, he is referred to as the Ghost of Sparta, or the God Slayer, but never, ever the God of War, except for when we enter Sparta, which is probably one of the only parts of the game which makes us feel like a God. Even people completely ignore him and don’t even acknowledge him, not even the Spartans he meets throughout his quest. Even his armour is not seen in the game, he is dressed like a simple man, and his godly powers and abilities are not present at all in the game, which is really baffling to see, and amounts to a great deal of confusion and inconsistency with the entire series. 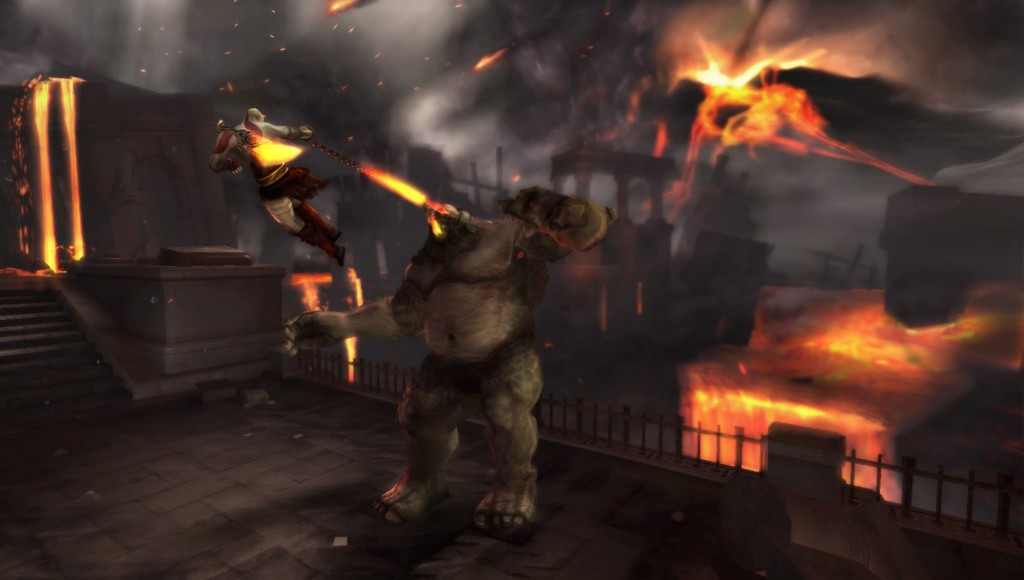 I am the God of War! I will make you suffer!

Also, the beginning of the game was rather abrupt and poorly directed, and no actual reason was given as to why Kratos was going where he was going, and this seemed really inconsistent with the game. It seemed as if the developers Ready at Dawn wanted to get to the point rather too quickly and felt as if Atlantis was a good place to begin, so they never even gave an explanation why the game began where it did.

Ultimately, it all boils down to this: God of War: Ghost of Sparta is one heck of a game, one of the best to have been released this year, and a definite contender for the Game of the Year title. It has its own flaws, every game does, but thrilling, fast-paced action, a deep and involving story, movie-like presentation, great soundtrack, and the best boss battles make it a worthy game, and good enough to warrant a purchase, despite the fact that it is fairly shot, even for a God of War game.

Spectacular visuals, the best you have- and ever will- seen on the PSP; Gives a new story perspective and another take at Krato's past; Ties up a lot of loose ends; Emotionally charged, giving Kratos' character a new level of depth; Some of the best directed cutscenes ever and really intelligent camera angles make this a game of epic proportions and amazing scope; Simply amazing combat, Combat Rush is really fun to use; Some great new additions and tweaks; Amazing boss battles; Much more varied gameplay than Chains of Olympus

Too short; Some framerate stutters come in the way of the action; Sounds is buggy with headphones

Final Verdict:
EDITOR’S CHOICE
This is not an an awesome game for a handheld that has next to nil good games. This is just an awesome game in its own rights, one that even best of the best console games cannot hope to match up against.
A copy of this game was provided by Developer/Publisher/Distributor/PR Agency for review purposes. Click here to know more about our Reviews Policy.